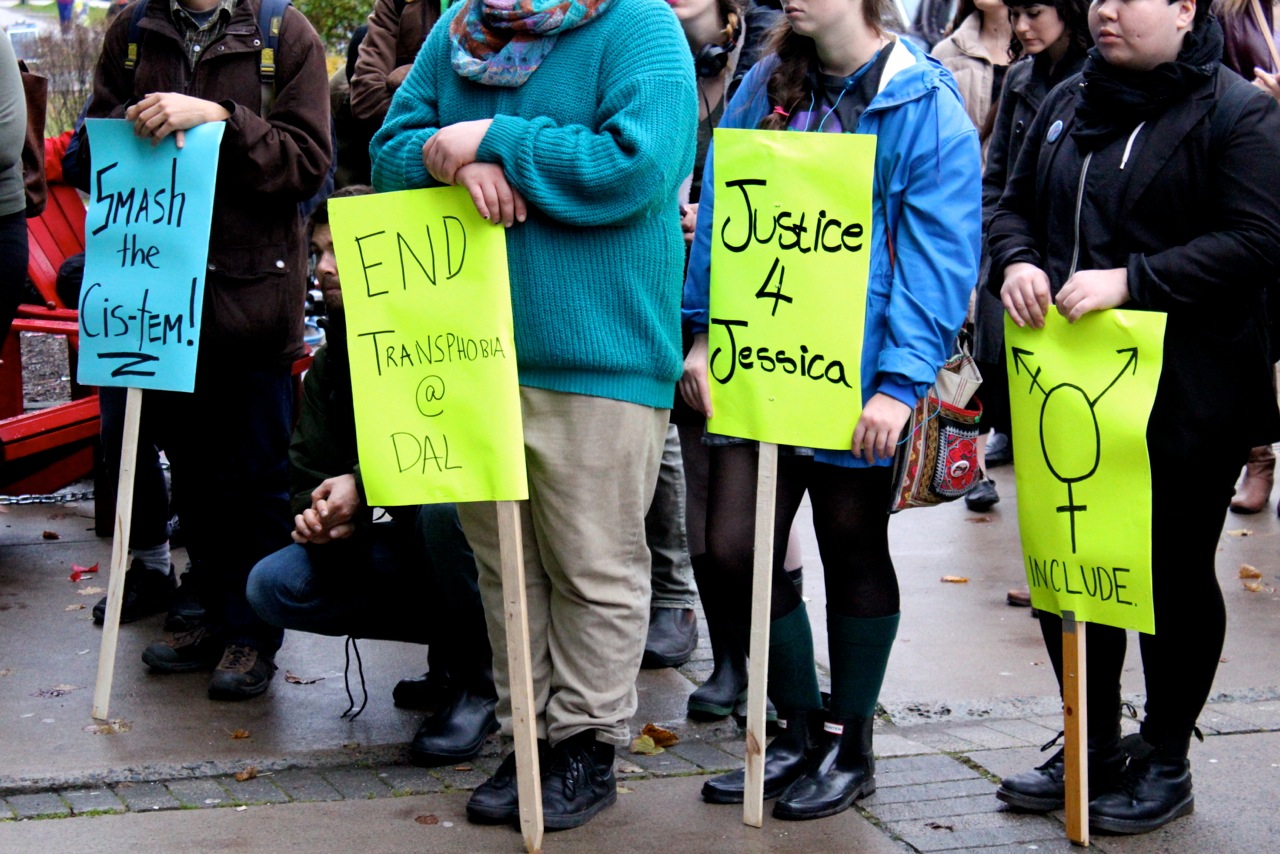 The words were right there on the cue cards she held, words she had redrafted time and time again to make them perfect, but Jessica Dempsey was still at a loss for what to say.

The silence would have been awkward, if not for her audience’s understanding.

The Dalhousie management student was the centre of attention last week at a nearly 90-minute rally against transphobia outside the Student Union Building (SUB) at Studley campus on Nov. 7.

Dempsey has generated considerable attention after a pair of media reports late last month, including in the Gazette, disclosed her allegations that she had been discriminated against on-campus because she is transgender.

After composing herself in front of nearly 100 supporters, Dempsey read her prepared speech. She said her decision to go public was not solely for herself.

“I am not going to hide anymore. I decided to take a very public stand for myself and many others, like me, who are not being heard,” she said.

Her allegations are directed at Aramark, the university’s food service contractor, after three separate incidents.

The first episode occurred this summer when she claims an Aramark employee refused to serve her food when Dempsey told the employee her female name. Dempsey previously frequented Shirreff Hall when she went by a typically male name.

Dal’s Aramark employees took sensitivity training, but Dempsey believes it was not sufficient. Since then, a different employee called her by her former name and, most recently, another Aramark worker asked Dempsey if her breasts are real.

The outpouring of support since the media reports has been flattering, she said. Dempsey didn’t know this rally was being organized until she saw it on Facebook.

“When I got the message I was ecstatic, I wasn’t upset,” she said. “I was actually very touched that someone would make an event in my name.”

Dempsey filed her human rights complaint against Aramark on Nov 12.

Jude Ashburn, South House’s outreach coordinator, sent requests to various levels of Dal administration on behalf of the campus’ gender and resource centre to attend the rally. They read a letter from university president Richard Florizone, who sent his regrets and discussed several steps Dal has taken to make its campuses a safe and welcoming place.

The Gazette recognized Dal spokesperson Charles Crosby in the crowd for part of the protest.

Shaun Bartone, a new Dal sessional instructor in social work, has experienced some of the same trans discrimination Dempsey has felt.

He visited South House after hearing of Dempsey’s troubles because he wanted to help.

“I know how difficult this is. I know how hard it is,” he said after the rally, where he spoke and brandished a self-made sign. “We had to support Jessica.”

Correction: An earlier version of this story used the wrong pronoun in referral to Jude Ashburn. The online article has since been amended. The Gazette apologizes for the error and any confusion it may have caused.