The cat man of Halifax 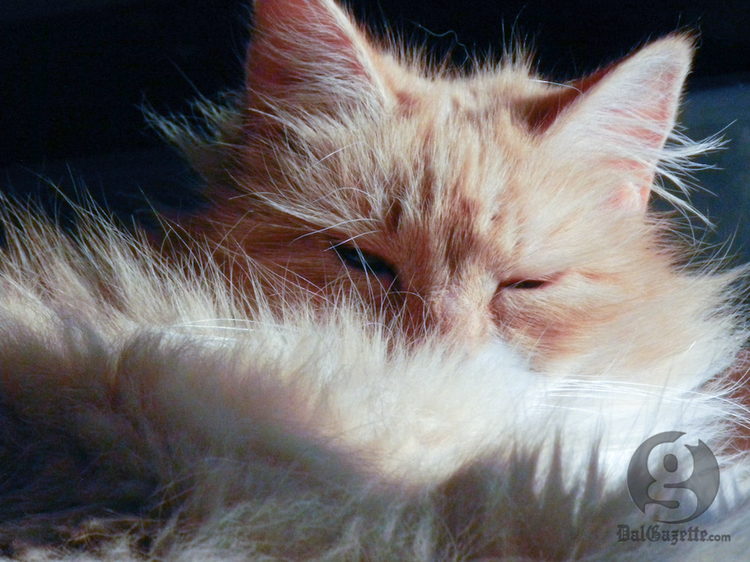 Pierre Filiatreault sits in his truck on a small, winding hill overlooking the Halifax naval dockyard. It’s eight in the morning, and warm for winter. The snow is thawing. According to the 52-year-old Navy veteran, it’s a great day to feed feral cats.

“There’s not a cat outside on a cold morning,” jokes Filiatreault as he looks towards his shelters.

“Cats will come out to see you in the summertime. Now, they’ll wait intside until their food is ready, and then come outside.”

Filiatreault drives down a short driveway, and before he can stop his truck, cats are emerging from the comfy shelters he built with the help of fellow dockyard employees.

As originally reported by Laura Hubbard in The Halifax Commoner, the shelters are small wooden shacks that are designed to keep heated during the winter. Some shelters have mini generators inside of them, and some shelters have heating lamps. Inside the “house” are blankets, beds, water bowls, and even scratching posts.

An orange spotted tabby, called Charlie Brown, stretches his body into the truck as Filiatreault feeds him bits of chicken. A massive white cat named Placid lurks in the background. He’s the boss-hog of the colony.

Every morning, Filiatreault goes into his kitchen—filled with supplies, blankets, and cans of food– to make the concoction of dried food, wet food, vitamins, and water. After he feeds the “North End Gang,” he moves to other shelters around the dockyard that are the homes of cats who have been exiled or cast out of the original colony.

“Some people tell me that my cats are fat,” he says, smiling. “But they’re healthy. They have a steady source of good quality food, medication, and treats. They aren’t spoiled, but they are cared for.”

Filiatreault is known to friends and donors as “cat-man.” He is the founder and proprietor of Pierre’s Alley Cat Society (PACS), an organization that houses, feeds and cares for the hordes of feral cats that inhabit the dockyard and Point Pleasant Park.

PACS, five years old this year, first started as an out-of-pocket endeavour. Driven by his love of animals, Filiatreault paid for the feral cats around the dockyard to be spayed and neutered from his own pocket.

“People look at stray cats and say, ‘Why don’t you do something?’ I’m the guy who did something about it.”

But animals are different. Life for a feral cat in Halifax, and for feral cats in general, is considerably bleak.

“In the wild,” says Filiatreault, “feral cats live for a maximum of two years. But our cats are seven to eight years old.”

Spaying and neutering cats, even house cats that are allowed outside, is the key for preventing the the feral cat problem. Filiatreault says students are a contributing factor.

“Students are also a big problem. They go to school, and want a kitten. They get a kitten, and they call a local vet to get it spayed and neutered and are scared off by price. Then, when they leave for the summer, their parents don’t want a cat so they leave it outside, and suddenly that un-spayed and that un-neutered cat starts a colony.”

Halifax city council is currently considering a program that would subsidize spaying and neutering of pets, after ‘Tuxedo Stan’—a cat—ran a high-profile campaign during the municipal election dedicated to the issue.

“I cannot solve the problem on my own,” says Filiatreault. “Do I go home and cry about it?” He pauses for a moment, looking out at the harbour. “Yes.”