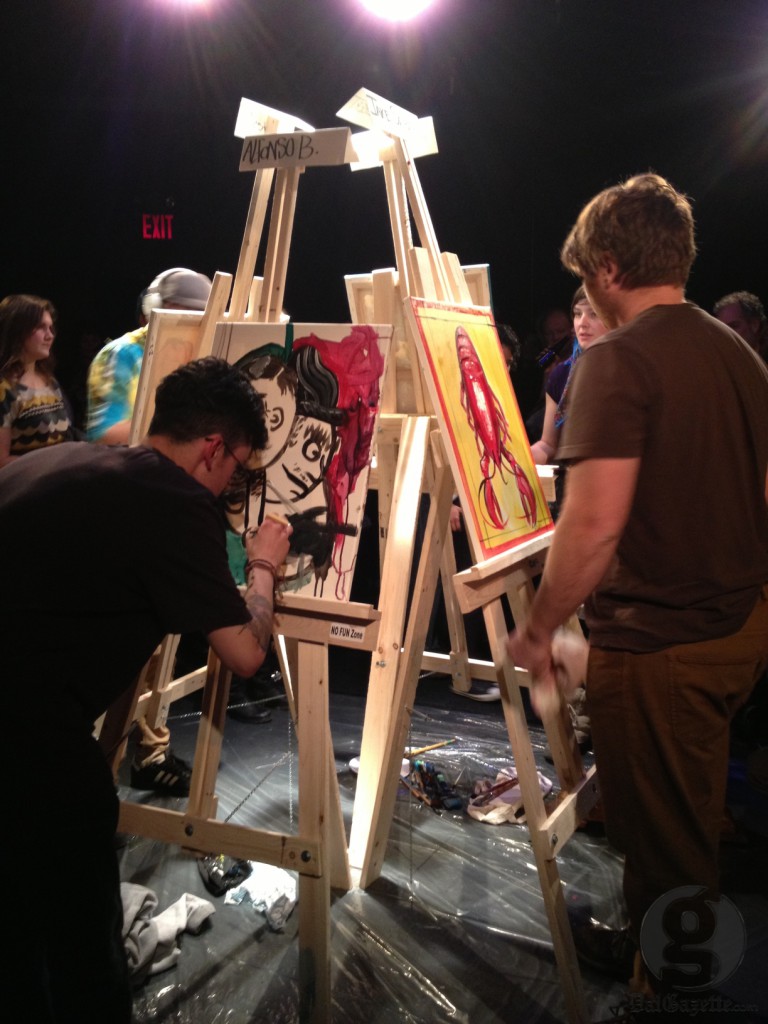 In the center of the black room, four easels and four blank canvases sit under a spotlight. A crowd assembles, shying from the light and the easels, and the first of the night’s 12 combatants get set under a canvas to wait for countdown.

At the Bus Stop Theatre, Halifax’s first Art Battle takes off in a frenzy of splattered acrylic paint and applause. This is not some high-brow artistic venture, a point that was made clear as soon as “99 Problems” began playing over the sound system. This competition is a rap battle on canvas.

Halifax was inducted into the Art Battle forum on the Jan. 12, met by a remarkable at-capacity audience and 12 local painters. An Art Battle is a three-round free-for-all between four painters, who (under no restraints of content) have a mere 20 minutes to create an original piece. The winner is decided via audience vote, and moves on to paint against winners of the other rounds.

“We wanted a live arts event that really engaged the audience and showcased the painters at the same time,” explains organizer Chris Pemberton over the phone.

“Not only would they be enthralled with the work going on, they’d be involved in the artistic process.”

Pemberton and Simon Plashkes organized the first Art Battle in Toronto in 2009. Since then, 40 Art Battles have taken place between Toronto and Vancouver, including their first ever Art Battle National Championship, which was held last year.

Art Battle 41 was Atlantic Canada’s first, with Pemberton and Plashkes planning monthly Art Battles in Halifax with artists vying for a spot in the Halifax Championship, speculated for early summer. Artist Grace Simms was voted champion on Saturday, after winning her initial round robin and the frantic 20-minute finale.

The night was filled with a great assortment of painters, all of whom come from a variety of backgrounds. Ingrid Singing Grass, a third-round competitor, has been painting for 18 years, and paints live not to compete, but for the therapeutic effect of sharing. Justin Lee, winner of the second round, works as an animation director and nodded along to the Rural Alberta Advantage through his headphones as he worked. And then there was Alfonso Bustamante, who didn’t even know that he would be painting that night.

“I wasn’t allowed in at first [because the theatre was at capacity], but as soon as I got in, my friend said to give my name to Chris [Pemberton],” says Bustamante. “I just painted something I drew in my sketchbook earlier.”

“This place is filled with communities,” says Plashkes, “filled with people excited to coalesce around something. And we’re excited to provide the framework; we’re hoping to start a movement.”

The next Halifax Art Battle is to be scheduled for Feb. 23 at the Bus Stop Theatre. Artists ready to blend blood and paint can register to compete at http://artbattle.ca/register/.