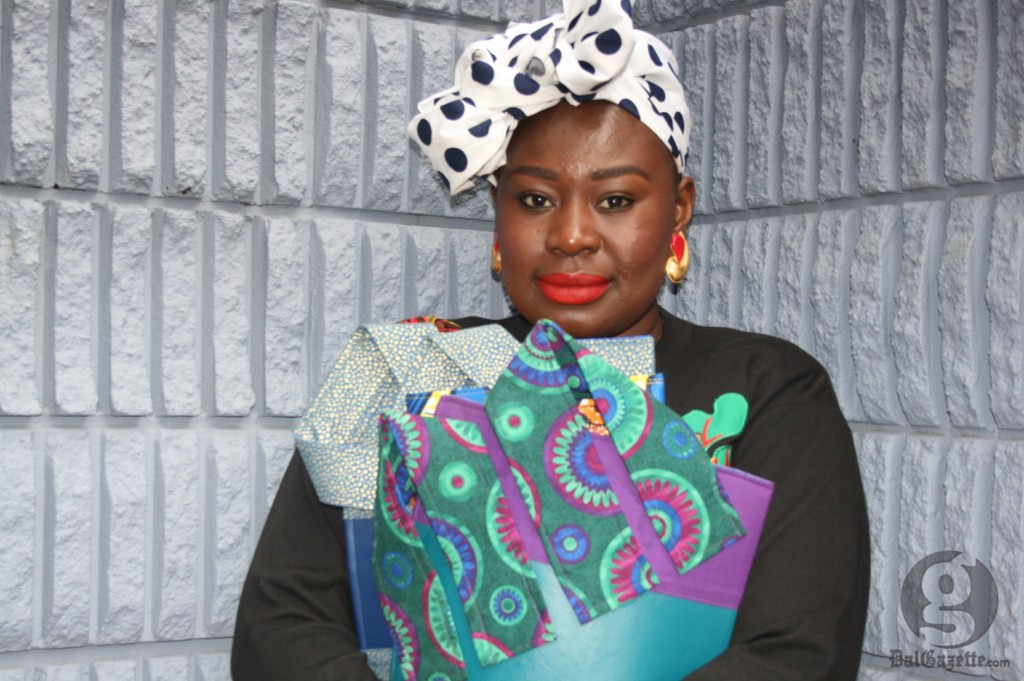 Musemo (Mo) Handahu was flipping through a fabric catalogue when she heard a voice.

She gathered vibrant print textiles and began sewing away.

Her first clutch was flimsy—nothing special—but to Handahu, that first bag represented the beginning of a journey.

“I’d be sewing straight into the morning and I just couldn’t stop because I kept wanting to make it better, and I haven’t looked back,” the 30-year-old says.

“I (always) knew when I was younger … that I was expected to live up to (my names) or at least be the best that I could be in whatever I wanted to do,” says Handahu.

Handahu is from Zimbabwe, and her first name means ‘pillar of strength.’ Her last name means ‘lion hunter’ in Tonga, a language spoken in Zimbabwe.

Handahu is gathering a majestic narrative.

Designing clutches gave Handahu an idea of the type of life she’d like to design for herself, one handcrafted with meaning.

With her new blog, lionhunter.com, Handahu hopes to inspire by showcasing talented people who are often overlooked by mainstream media.

“With my previous blog, I was kind of put in the genre of the curvy style girl. Which is great, but that’s not what I’m all about,” she says.

“Sharing other people’s amazingness is what I love to do.” She’s done features on a variety of local people on her blog, from thrift shop owners to musicians.

Handahu says she got her work ethic from her grandmother and mother.

“I have to believe that there is so much more to life than just being mediocre,” she says.

Handahu thought she’d be selling clutches to only a few close friends, but Clutch Culture has gained a following. Designing for Clutch Culture and freelance styling are now Handahu’s full time occupations.

Media outlets such as Fashion Magazine, the CBC, and CTV have featured Handahu’s work.

She is also a style panelist for Fashion Magazine. This summer, she had her first runway show at Atlantic Fashion Week, and received glowing reviews from The Coast.

Handahu’s clutches are a combination of vibrant prints and colours paired with leather. A print of tropical leaves over coral blue leather, tribal prints mixed with tan canvas or geometric shapes paired with brown leather.

Handahu only creates one or two of each design.

Her guiding philosophy is female empowerment. Handahu often scouts the models for Clutch Culture off the street.

They are stunning, but not in the typical, toothpick, cookie-cutter sense of the word. They are curvy, and their faces are left un-airbrushed.

Handahu is between collections. She recently finished her seventh collection, but is taking time before beginning a new one. If Handahu is to do anything, she says, her heart must be in it.

The creative process is a struggle, and the determination to go on once you begin to pursue your dreams is even harder, she says.

“You get through all the hardships of people saying no and then having to prove yourself a bit more … It really takes a lot out of me sometimes.”

Handahu says Diane von Furstenberg is one of her favourite designers because she fought for decades to climb to the top of the fashion world.

Stories such as von Furstenberg’s inspire Handahu to keep going.

In her early days, von Furstenberg nicknamed herself Diane the Hunter.

Handahu was given the name hunter at birth.

“Do I live up to these names?” she asks.

On the wall beside Handahu’s bed hangs a collage of magazine clippings, a picture of Oprah Winfrey, and various quotes. In bold fonts, the quotes say things such as “own your power,” “a man on a mission,” and “own your own vision.”

At the top is a cover story about her in The Coast.

Handahu has lived in Halifax since she came to the city for school when she was 17.

When she was younger, Handahu studied business administration at Acadia University. She intended to pursue a career in human resources.

“Now, when I look back, that would have just been existence. For me to be truly happy I needed to discover this.”