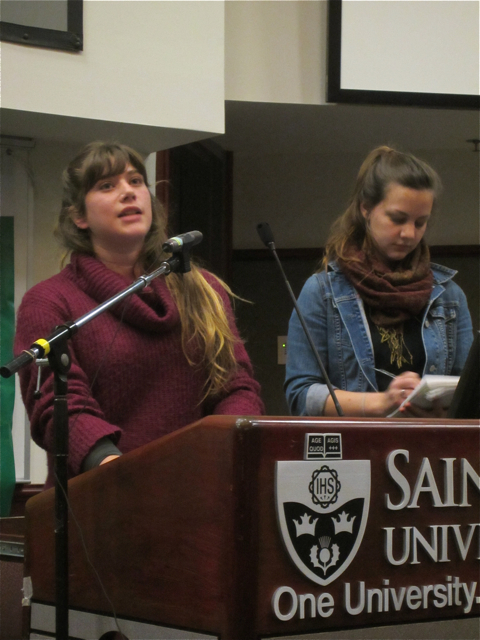 This Wednesday, in the build-up to its national day of action on Feb. 1, the Canadian Federation of Students (CFS) brought a special speaker to Halifax.

Valentina Latorre, 21, is the vice-president of the Student Federation of the Pontifical Catholic University of Chile. She was flown into Canada this week by the CFS to speak at Ryerson University in Toronto. Piggybacking on this opportunity, the CFS Nova Scotia invited Latorre to give a similar talk at Saint Mary’s University.

The topic of the night was how to build a broad political movement at the national level, with access to education at the centre. Not an easy undertaking by any measure, but it’s one that Latorre and other student organizers in Chile have taken to heart.

About 100 people (almost entirely students) listened eagerly to Latorre’s passionate description of Chile’s student movement, which has garnered a fair amount of international media intention in recent months. In May of 2011, hundreds of thousands of Chileans – not just students – took to the streets to call for better access to education.

Sustaining such a movement was one of the issues Latorre addressed during her talk. “It’s hard, because we are in a society that’s very individualistic, everybody is in their own world.”

“We have this unstable support… People get tired.” Once Latorre begins describing the kinds of protests Chileans have been staging, it’s easy to see why. Kissing marathons, dancing to Thriller, and a continuous eight-month-long relay around the Chilean parliament were only some of the tactics these students used to get their message across.

That message, as it turns out, is quite radical. These Chilean protesters are not just asking for lower tuition, they’re after structural reform. This includes constitutional changes to enhance political participation and transparency. “The constitution that we have in Chile is the same one that we’ve had since the dictatorship.” This dictatorship, run by General Augusto Pinochet, was the result of a CIA-sponsored coup in the 1970s, intended to introduce neo-liberal economic policies to Chile.

Latorre argued that access to education will require radical changes to the economic and political systems in Chile. Systems that, as she points out, have created vast income inequality in the country. “After all, the richer people are not in the streets asking for better education, because they have it.”

Latorre went on to describe the frustration involved in taking to the streets week after week (every thursday, to be precise) only to be met with indifference from politicians and tear gas from the police. The latter being a more extreme scenario than student activists in Canada might be used to.

Latorre, who aspires to become an English teacher, delivered her words charmingly yet humbly. A bilingual Dalhousie student on hand for those occasional, difficult-to-translate phrases – one cultural reference to Dragonball Z perhaps being the most memorable. After her talk, which featured a powerpoint (in Spanish) and an inspirational video (also in Spanish), Latorre answered questions from the audience on a variety of topics.

Labour unions, apathy and the importance of art in social movements were some of the issues discussed. When asked about the role of the media in covering social movements, Latorre released a short sigh. “The media in Chile is very, very controlled by the government… You have all the media showing that students are the ones that are violent.” Latorre added that even student-run papers in Chile are funded largely by the administration, so publicizing a message of dissent can be difficult.

Thankfully, Latorre pointed out, social media is providing a new avenue for building grassroots movements. She made clear, however, that having the technology is not enough. Latorre explained how the Chilean students managed to get 200,000 people on the streets last May. “It’s a process of communicating to everybody how this affects each person.” To do this, student organizers went door-to-door to rally the support of average citizens. An investment in time and energy that has very much paid off, it seems.

Finally, when asked what we as Canadian students should take away from Latorre’s words, she answered simply: “Stand and fight! Take control of the things that matter.” After a short pause she added one last thought. “Be consistent with what you believe.”