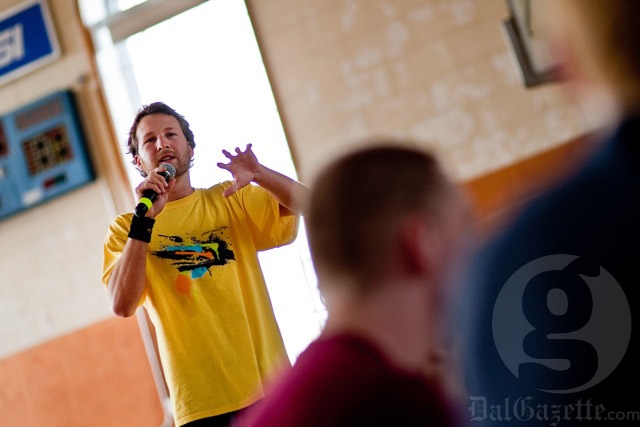 Getting people engaged in the DSU is what gets Jamie Arron out of bed in the morning.

“What engagement means is being aware of the world that you live in and recognizing your own agency to affect change within it,” Arron says.

He’s sure that community building can happen anywhere. As VP (student life) in 2011-2012, he’s spent a lot of time planning parties at the Grawood.

“I was constantly rationalizing and asking myself: is this anything more than just people getting shitfaced and having a great time?”

He says even a sloppy night at the Grawood can build community on campus.

This year, Arron was elected DSU president. In that time the union has made some serious progress in actually catching students’ attention and holding it long enough to throw down some pretty neat projects.

Arron’s proudest accomplishment as president is the ‘Soap Box’. It’s a website for students to share ideas about what campus life should or could be like. One of the most popular ideas from Soap Box is to turn University Avenue into a pedestrian-only zone.

He says this online forum is helping to fix the ‘insiders only’ trend in the DSU.

He also excited about having changed the way faculty society elections happen (like the Dalhousie Science Society).

Faculty society elections used to run like a popularity contest – votes happened in person, and whoever brought the most friends out to the meeting would become the president. This year, elections will be run online at the same time as DSU elections.

Why does opening up these faculty-level student groups matter so much?

“The Quebec student strikes were all organized at the faculty level; it wasn’t through centralized student unions,” he says.

“Take control of our education”

He says his goal for the DSU has been to gain “legitimate support from students so that it can become a real union. “

Once the union has support and engagement, Arron hopes the movement will go beyond parties and foosball tables and take on bigger issues.

“I think we can take control of our own education,” says Arron. “The whole concept of what a university is, is at stake right now. Is it going to become a training institution for jobs? Are people going to get back into small class sizes? Or are people just going to drop out of the whole fucking thing? All of those are very valid questions right now.”

Students have the most at stake

Arron is adamant that students are the ones to lead social change.

“Students have the most time and energy and freedom in their lives … to push for things that other people are too busy to.”

He points to the ‘60s civil rights movement, Students for a Democratic Society, Occupy, and the Quebec Student Movement as shining examples. Groups of students and other young people led these movements, some of which fundamentally changed society.

“(Students) are the ones who have been pushing … they’re also going to be the ones inheriting the world, they have the most at stake.”

That’s his goal as the president of the DSU – to move away from a self-serving student union, and towards one that really forces social change.

A long way to go

It’s not easy to connect with everyone at a multi-campus school with 17,000 students. Only 13 per cent of students voted last year, showing that the Dal student body can hardly be considered engaged.

There are a lot of groups to consider in DSU decision-making. Arron says there is a tradeoff between representing people and getting things done.

“Trying to keep everyone in the loop isn’t always possible,” he says. “Do you go slow and make sure everyone has all the information they need at every point? Or do you have to shoot first and ask questions later?”

Did he do a good job? That’s for you to decide.