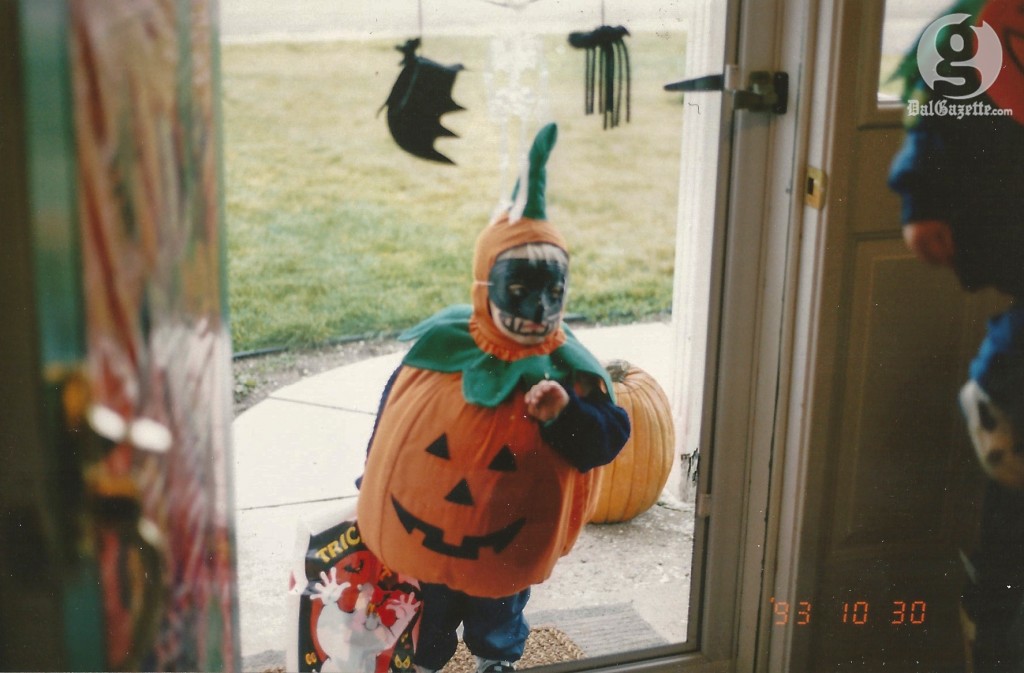 This author shares her most awesome and perilous Halloween memory. (Chris Parent photo)

Picture, if you will: a dark room, a candle held up to my heart, the light of its flame flickering across my face. Now, listen to my terrifying tale of a child dragged helplessly by a car, trapped in his Halloween costume.

When I was younger, Halloween was nothing important. We didn’t have much money was I was a kid, so a lot of my costumes were hand-me-downs, recycled from the year before or homemade. Suffice to say, I was a witch on Halloween about 70 per cent of the time.

It was in grade 2 or 3 when my dad’s friend Paula, who I knew because she worked in the science shop in the mall, offered to take me out to a richer part of town to get better bags of candy. I was excited beyond belief, and invited my stepbrother Nicky and stepsister Candace to come with me. Candace and I went as (surprise!) witches, but my hat was newer so I was better looking. Adding to my allure was my green skin, which my dad painted, but somehow I remember the hat more fondly. Nicky, two years my junior, went as the killer from Scream, only considerably shorter.

Our evening went something like this: Paula picked us up, drove us across town, let us out to walk around one area of the suburb, after which we went back to the car to store the pillowcase of candy. Then we would drive to another set of suburbs and do it all again. It was the third or fourth string of the night when we returned to the car, exhausted. Paula put our bags of candy into the trunk, took the driver’s seat and turned our Halloween-themed mixed CD back on. I removed my hat, which was tall as well as new, and got in the back first. Candace came in on the other side and put her hat with mine on the middle seat, after taking a minute to fix her dress. Outside, Nicky was fiddling with his robes (read: dress) and started getting into the car slowly.

But not the regular kind of slowly. The pokey, pain in the ass slowly, when you know he is getting tired but he doesn’t want to admit it. Basically, he was trying to stall.

Well, Paula looked in the back and saw three shadowy bumps, two taller ones on the sides and a shorter one in the middle seat. What she saw from left to right was Candace, my hat on her hat, and me. Nicky, trying to nudge Candace over and sitting half- in, half- out of the car, was in Paula’s blind spot.

He fell out of the car when Paula started the engine and drove off. He was caught in his long robes, head hitting the car door which swung further open, scraping across the ground. Candace screamed before I did but once she started going I quickly joined in. Paula didn’t stop, just turning slightly to see what was scaring us. When she saw only two of us, she turned to her left and saw the black-robed body dragging across the pavement. She halted immediately.

Nicky had scrapes all over his body but his jeans took the brunt of the pavement. He had hit his head twice but was otherwise fine. Paula was a basket case and decided we were done for the night. When she finally composed herself she drove us home, gave my dad all of our candy, and drove off in a terrible state.

Nicky was all dazed smiles for the rest of the night.