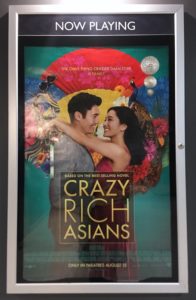 Crazy Rich Asians has undoubtedly been one of the biggest Hollywood hits of the year. The film, starring Constance Wu as an economics professor travelling to Singapore to meet her crazy rich boyfriend’s crazy rich family, has received immense critical and commercial success.

It’s been highly celebrated for its all-Asian team of actors, writers, and director–the first major Hollywood film to do this since 1993’s The Joy Luck Club. But amidst the celebration, many have asked why it’s taken so long to get this kind of representation.

It seems like Asian-Americans, and all Asian diaspora in the West have been craving films with Asian faces for a long time. In recent years there’s been a lot of controversy over white-washing of Asian film roles. This includes Emma Stone’s character in Aloha, who is quarter Chinese and quarter Native Hawaiian, and Scarlet Johansson’s leading role in the live-action adaption of Japanese manga series Ghost in a Shell.

Regardless of why Hollywood has taken so long to learn its lesson, hopefully the success of Crazy Rich Asians will show the industry that not only is accurate representation wanted, but there is also a huge audience who will go out and pay to see these films.

As much as I love this movie for finally showing a depiction of Asian people that is not one of poverty or simply a racist stereotype, there are some problems worth mentioning.

One argument is the fact that the film doesn’t do a good job of showing the ethnic and racial diversity of Singapore. This wealthy city-state has a richly multicultural population, with huge numbers of people of Malay, Indian, and other descents. But the faces of this movie were only of the light-skinned ethnic Chinese who dominate the rich upper class in Singapore.

The only non-Chinese faces in the film that I remember were two creepy-looking, turban-wearing Indian guards who scare the main character, Rachel, and her friend as they drive into her boyfriend’s mansion. I know it was an incredibly small part in the movie but seeing the only brown faces in the movie being used in this way brought me back to watching the Indiana Jones films as a kid: watching the only people who looked like me depicted as scary or poor.

Crazy Rich Asians is still a huge win for representation in American film, but in America alone.

In Hollywood, the word “Asian” still just means people who look ethnically-Chinese. There continues to be a multitude of other races from the continent that are overlooked. South Asians, Eurasians, Pacific Islanders, and so many other people have yet to be included in the general understanding of the word “Asian” in Hollywood. From time to time we’ll get reminded of the presence of brown-skinned Asians in films like Slum Dog Millionaire (which I think was a ridiculous simplification of the poverty and corruption in the country) but this industry has always been one to simplify the depiction of foreign lands in a way that is digestible and easily-understandable to American audiences.

So why not show more? Why not try and create a nuanced, complex, and well-researched depiction of a foreign country and its people? Maybe today’s audience is still not ready for complexity. Judging from the fact that Slum Dog Millionaire won Best Picture at the Oscars in 2009, and that only a few people were critical of the representation in Crazy Rich Asians, maybe most people still don’t care.

Crazy Rich Asians is still a fabulous film, and it gives me hope. It shows that change does happen over time. What’s clear is that audiences do want to see a film with diverse representation of any kind.

The question now is: how long will we have to wait to see another?