During research for our annual Halloween issue, our editors have uncovered pertinent information on two myths behind this holiday.

If you dare, enjoy the tale of how our Opinions Editor solved a Dalhousie ghost mystery from 66 years ago — and learn why you may wish to drop the word “Ouija” from your vocabulary.

Uncovering the Great Ghost Hoax of 1949

Since the incredible staff at Dalhousie Archives uploaded our entire surviving archives up to Volume 145 to their online Dalspace content portal last year, the Gazette has published a weekly From the Archives section bringing current trends at Dal into context.

Looking for stories of Dalhousie ghosts, Hillman found that our editorial staff at the time had printed the results of their investigation into rumours of a ghost in the Arts Building (now the University Club).

After locking themselves within the building overnight, four staffers wrote about how they witnessed a ghost. The article included a photo of a human shape with a limb stretched out from behind a large white sheet, with an explanation the photograph was the result of their photographer waiting at the bottom of a stairwell after they all heard mysterious footsteps.

The editors swore they were in attendance when the photo was developed, and that it was not doctored.

“The trouble is, the ghost looks too much like a traditional ghost—if it is a ghost,” the story said.

“Whether this particular article was all an elaborate prank by the Gazette staff remains unclear,” wrote Hillman last year.

But Hillman, who truly deserves a contract writing the third volume of The Lives of Dalhousie University, did not stop there.

He found that in the next issue printed after this 1949 ghost investigation, a picture was printed of the same “ghost,” but with a man clearly visible under the sheet. 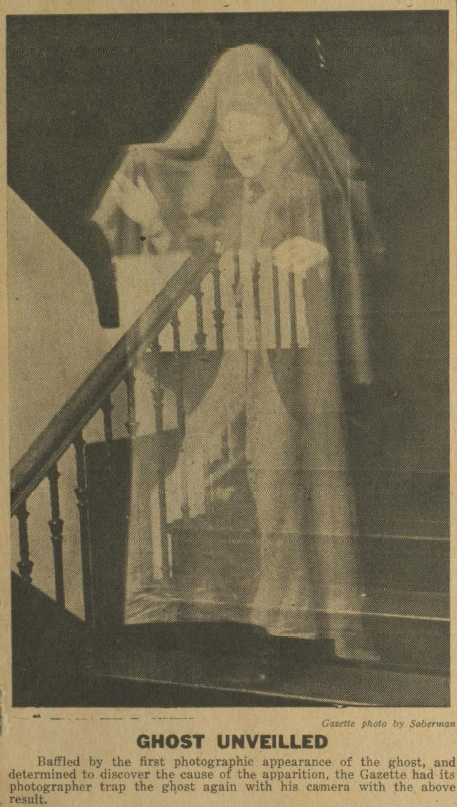 Hillman realized the man under the sheet shared a strong resemblance in Charles W. MacIntosh, who was later Gazette editor-in-chief and had his likeness printed in the newspaper.

Hillman’s research determined MacIntosh went on to be an incredibly influential lawyer in Nova Scotia, authoring the Nova Scotia Real Property Practice Manual — the definitive reference text on property practice in the province for self-represented litigants.

Reached by phone in winter 2014, MacIntosh confirmed with a laugh to the Gazette that he remembered the “haunting” of the Arts Building in March of 1949, and that the story had indeed been a practical joke on the student body.

The follow-up article to the original March 22, 1949 hoax story made it seem clear the initial story was only for laughs. But just in case any long-time readers have been wondering, yeah, it was a hoax.

Say no to “Ouija” and join #TeamSpiritBoard

After our editors received a plea for help from an anonymous reader seeking to understand a “paranormal” experience in the SUB two weeks ago, the Gazette editorial board decided that, with Halloween so soon, we would treat this request for an investigation as seriously as any other pitch that comes our way.

This week, contributor Logan Robins did a great job of asking students and SUB frequenters about any possible paranormal experiences on campus they have faced, and his “rodent fiend” theory is quite convincing.

But in a long-standing Gazette tradition, our editorial board’s Halloween story meeting got out-of-control this Monday, and we decided we also needed to interview the SUB ghost itself.

John Hillman and I decided we would use the classic divination method of the Ouija board to see if the ghost was interested in giving their own side of the story.

Among our editors — generally the types of people biased in the favour of evidence and data — there was not a single Ouija board in our possession. And when I asked friends and loved ones about whether they had any magical tools I could borrow to interview a ghost, they mostly expressed concern and asked questions about the actual stories I’m working on.

So, from the Gazette‘s Twitter account, I made a plea to the public on Oct. 20: “We’re looking to borrow a ouija board for a very special investigation. Any leads are much appreciated!”

We’re looking to borrow a ouija board for a very special investigation. Any leads are much appreciated! news@dalgazette.com

Moments after I put that message out, I started to wonder: why is it important that I have a real “Ouija board”? What is, even, a Ouija board, and what would separate any board I borrow or purchase from a board I could create myself?

I found the Oxford English Dictionary gives the etymology of “Ouija” thusly:

“The word has been variously explained as (a) < French oui oui adv. + German ja yes (see yea adv.), (b) < an ancient Egyptian word for ‘good luck’ (although apparently no such word exists), and (c) < the name of Oujda, the name of a city in Morocco.”

The OED’s first recorded mention of the word “Ouija” goes back to 1890 when the American Stationer trade journal mentioned a “new mysticism” of the Kennard Novelty Company in Baltimore, the ‘Ouija Board’ or ‘Egyptian Luck Board.’

Further research showed the first modern incarnations of the Ouija board, created in mid-19th century England, were carved in wood and simply called Talking Boards or Spirit Boards. It wasn’t until the product was mass-marketed in 1890 that it was assigned the arbitrary, exoticized name of “Ouija.”

Yet, to this day, Google Trends shows there is a huge spike for search term “Ouija Board” every October and barely any searches are ever made for “Talking Board” or “Spirit Board”. 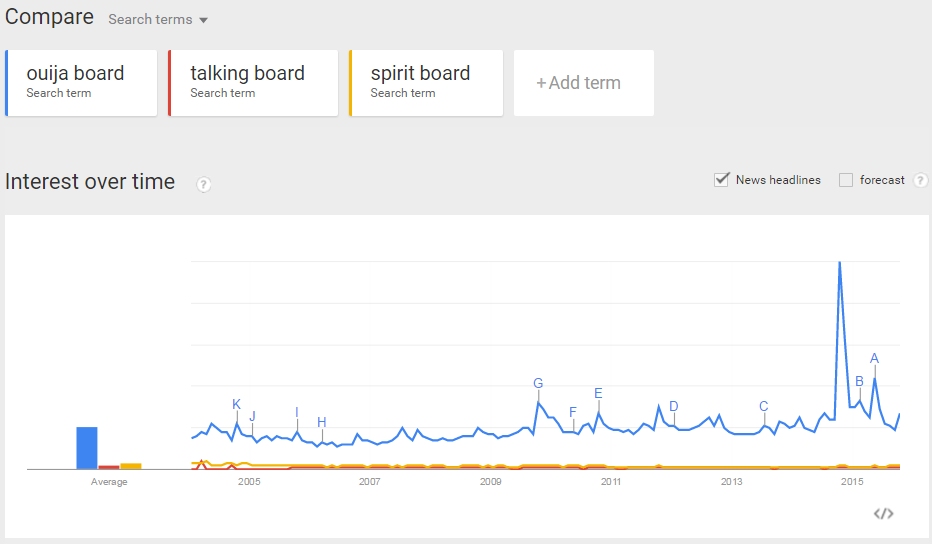 A Google News search for “Ouija Board” finds 7,040 results. For “Talking Board” there are 109 results, and “Spirit Board” has 438 (with some of these results referring to the South African Wine and Spirit Board).

I realized that an infinitely better alternative to spending $40 at Spencer’s Gifts would be to share in the passion of the first spiritualists who created their own boards, and so I found a template on Wikihow and printed off my own paper board from the comfort of the Killam Library.

Back at the Gazette‘s temporary office in the basement of the SUB on the evening of Oct. 23, without a true planchette (the board that slides over the Spirit Board), Hillman and I placed a toonie over our looseleaf portal to the spirit world.

We said a greeting to any ghosts willing to speak with us, and asked if anyone was there.

The toonie slid to “Yes” on the board, surely by Hillman’s intention.

When we asked the spirit we were in contact with for its name, as is standard journalistic practice, the toonie spelled F-L-A-W.

We asked the spirit why they were in the SUB, and the toonie spelled O-F-F.

When initially asked why they would not leave the SUB, the “spirit” moved our makeshift planchette to spell D-E-I-G-S.

When the spirit was then asked if it felt it could properly communicate with us, the toonie moved towards “Yes.” We repeated our last question, asking the spirit why it remained at Dalhousie, and the toonie spelled I-P-E.

The planchette remained on “E” for a minute before Hillman and I took our hands off the board to discuss how we could determine whether the spirit was mysteriously spelling “IPE” or possibly meant to say, “I PEE,” or even “I PEEEE,” etc.

We realized we hadn’t determined criteria for how any letter could be repeated and, crying with laughter, abandoned the entire endeavour in lieu of any obvious signs of otherworldly interference.

In the end, our attempt at communicating with any willing spirits possibly disturbed by renovations in the SUB was a failure, but we’re reporting the results here with honesty because we learned something important in the process — the word “Ouija” is outdated.

Let’s not uncritically use any old marketer’s language that obscures the actual history of other nations and groups of people when we refer to our everyday tools of pseudoscience. Instead, let’s say #NoToOuija and join #TeamSpiritBoard.

Found within issue 148-07 of the Gazette this week, you will find a Spirit Board you may cut out and refer to if you absolutely must ever attempt to communicate with the dead. If this prevents the sale of even one “Ouija Board,” we have made the world a more accurate place.