In the overall context of transparency at Dalhousie, a recent motion to publish the school’s publicly-traded holdings holds little ground

This article is not about the focus of the contention regarding the Board of Governors decision to reject the divestment of their investments – rather, it is about the motion they did approve of on Nov. 25 with regards to transparency in their investments.

At the most recent meeting of Dal’s Board of Governors, the governors voted to adopt a motion that would have the board annually receive and publish a list of the publicly-traded companies in the investments of the university.

The exact wording of this motion is currently unavailable, which points to a larger question. What does this vote mean in the context of how information is shared at Dalhousie? How much do we know about the activities of what happens at the Board of Governors besides what the Gazette and other media sources report?

These questions were in part posed by reporter Frances Willick’s article in the Chronicle Herald about the lack of transparency in the governance of post-secondary institutes within Nova Scotia, but it seems valuable to talk specifically about how it relates to this most recent motion and the Dalhousie Board of Governors specifically in the grander context of transparency within the University. 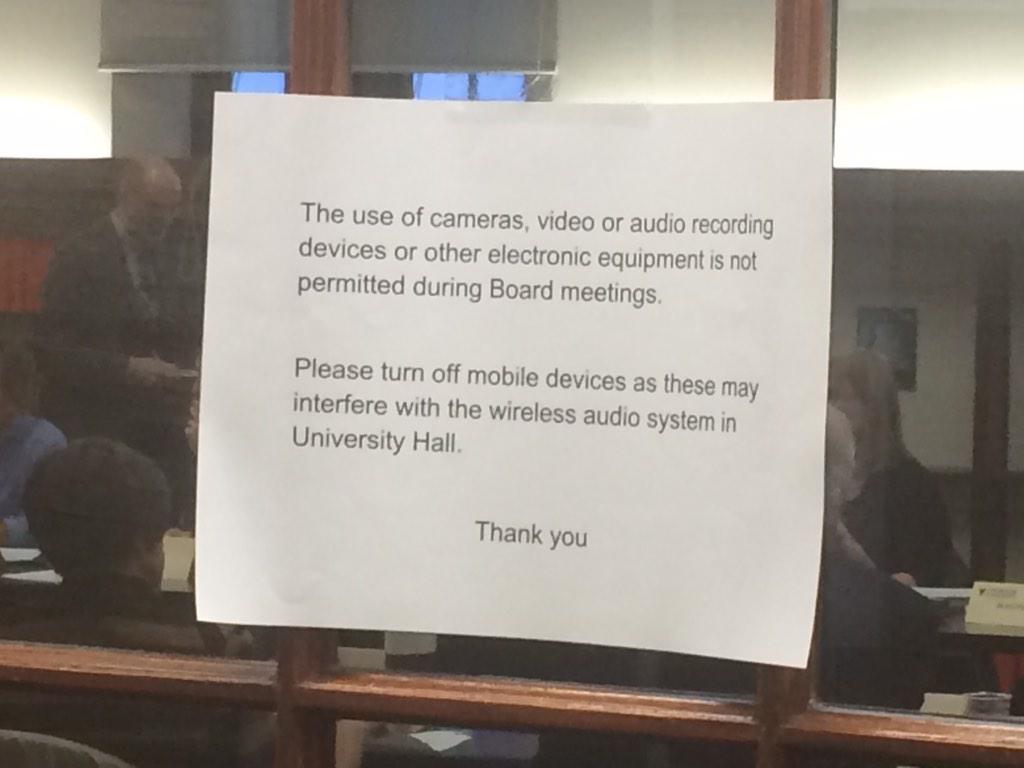 A sign displaying a little-obeyed rule – visitors to the Nov. 25 meeting of Dal’s Board of Governors were asked to turn off any mobile devices on their person. (Photo by William Coney)

Board of Governors minutes can only be found without appendices, supplementary reports

Officially, the documentation of the Board of Governors and the Secretariat of the university as a whole is posted to Dalspace, Dalhousie’s digital document repository.

Digitized minutes and agendas are designated their own sections within Dalspace. Looking through the documents presently available, you will only find the minutes of the meetings of past years – the sections for the agendas are empty of any documents.

All approved minutes of the Board of Governors are available within the minutes section. While entries for documentation from 1848 (although the University Archives recognizes that they have entries from 1820 on) to 1986 are listed, and it seems that digital facsimiles have been made, they are not accessible when registered into DalSpace on a student account (or as a member of the general public). Documents following this date are publically available, most all in .pdf format.

The minutes do not include any of the various written reports which the Board had received at any given meeting. There are only written accounts within the minutes about what individual governors chose to speak about in regards to their presentations.

This means at various places, reports are left to be understood by the varying degrees which they’ve been discussed in the meeting. For example, see how the President’s Report (by former Dalhousie President Howard C. Clark) is given in the March 15, 1988 meeting of the Board within these minutes:

Copies of this report were distributed at the meeting, and a copy is attached to these minutes as Appendix B. The President commented on the impression he had received at recent meetings of the Association of Commonwealth universities about the unaniminity in the views held by the government and the public in many Commonwealth areas regarding universities. He also spoke about the legislation now proposed in Australia and England for a unified national system for post-secondary education.

The success of the 1987-88 Annual Fund under the leadership of Dr. Donna Curry was noted and the efforts of all those involved in this fund raising effort were recognized.

The resignation of Mr. John Mabley, Assistant Vice-President, Development, was noted with regret.”

Appendix B was not included in the DalSpace digital copy of the document. Compare this to the record of a report given last year at the April 16, 2013 meeting by former President Tom Traves:

Traves highlighted several areas in his report, including early student enrolment numbers for 2013-14 which provide some optimism that Dalhousie will reach its targets for next year, and an update on the University’s current budget development process for 2013-14. He spoke to the continuing impact of successive cuts to the operating grants from the province; the government’s confirmation in the April 4th provincial budget  announcement of a further 3% cut for 2013-14 brings the total cut to universities since 2010 to 10%. The University will bring in a balanced budget, but this will necessitate a 3.5% cut across units, some use of surplus funds accumulated from previous years and a proposed 3% increase in tuition fees. It is anticipated that these budget cuts may result in some program adjustments in some Faculties, but this remains to be seen.”

Neither of these reports are provided in any format other than what is attested to be included within them in the minutes.

This is especially notable within the context of the Board Standing Committees. Time after time, the minutes for these meetings simply present that they were attached to the package sent to governors before the meeting – a package which has not been preserved for those looking at the meetings from the outside, either temporally or spatially.

It’s not possible to tell exactly when these agendas are posted, but they seem to be sometime in the week leading up to the Board of Governors meetings and removed shortly after the meeting occurred.

Dalhousie Senate, as a comparison, similarly does not provide their agendas to Dalspace, but posts them to “Today@Dal” section of DalNews, the administration-run news feed of the university.

With neither of these is any supporting documentation provided in any related manner, such as the reports written specifically to be presented for the meeting, or even the wording of motions which are being brought forward to the Board.

For the specific wording, it seems as though to learn this as a member of the general public, or as any individual who is not on the board, one needs to be in attendance at the meeting itself.

For the most recent meeting of Nov. 25, a slightly different approach was taken with the reports. Hosted right off of the main page of the Board of Governors was the report, “The Proposal to Divest Dalhousie’s holdings in ‘carbon-holding’ companies”.

Alongside this report was the statement provided by Lawrence Stordy, Chair of the Board of Governors, which recommended that the Board choose not to divest.

A few other reports of the Board of Governors are shared in the side menu “Reports,” with the 2006 Long-Term Financial Planning Report and the 2012 Report on Student Ancillary and Auxiliary Fees being present alongside the reports on fossil fuel divestment. No reports which seem to be regularly occurring are published in this context.

Within the context of the Board of Governors own By-Laws, there is nothing specifically requested of them to provide anything more than what they already are. As By-Law 6.12.1 states:

Looking at this, the Board of Governors does not have any specific item of practice which asks them to go further than what they currently are doing, except to perhaps be actually presenting the minutes which have been approved so far this year in a public sense.

To put the motion that passed on Nov. 25 making Dal’s investments more transparent into context, it is not at the present time possible to be any more confident that this will improve the visibility of what the university chooses to invest within to anyone besides the members of the Board of Governors.

Because nothing has changed within the governance structures of the Board of Governors other than this motion, there is no real sense that this will affect change which is actually felt by observing the previous actions and current practices of the board, and to a larger extent, the University Secretariat.

Information like this would be especially invaluable in the evaluation of the members of the Board of Governors, especially for those positions on it which are put forward by the Dalhousie Student Union, the University Senate, or the Dalhousie Alumni Association.

Even in the context of the other seats which sit on council as representatives of the local government, business community, and other community leaders, it’d be useful to see this.

It does not seem that the third stated aim of Divest Dalhousie, seeking “Increased transparency in relation to investment policy and university governance,” will be any closer to being realized in any meaningful sense, even though the motion has been approved by the Board of Governors.

The fact that this request for transparency was recognized is certainly significant in itself, but at the present time the university’s operations do not demonstrate that this will be seen going into the future. A request for a meaningful change for transparency to the public would necessitate a change of the Board of Governors’ by-laws.

A formal request for comment for this article was sent to the Dalhousie University Secretariat and the DalSpace Repository, but no response was recieved. A request for the specific wording of the motions presented at the Nov. 25 Board of Governors meeting was denied by the Secretariat. This information will not be available until shortly before the next meeting on Feb. 10.

A recent email, sent to the “Dal Notice” email list of the university has clarified a few things that appeared at the public session of last Board of Governors meeting – although the majority of the issues posted in the above article are still extant.

These “Board Notes” sent to the email list were also distributed following the Board of Governors meeting of Oct. 21 (distributed on Oct. 30). The “Dal Notice” email is a frequent email list which posts notice and requests for participation in faculty reviews, university-wide events, consultations, and other similar items. After no earlier meetings of the Board of Governors has such information been distributed in such a way.

In practice, these notes are not any more substantive than the minutes of meetings with regards to the content they share.

The only item of real note within it is the summary they provided of the decision made by the Board in regards to the divestment issue and the transparency issue as it is was voted on. The email states it as follows:

“The acceptance of the recommendation of the Board Investment Committee that the Board not divest Dalhousie’s holdings in the 200 companies identified by Divest Dal, as presented in the Investment Committee’s Final Report on Fossil Fuel Divestment dated November 25, 2014. Additionally, the Board agreed to investigate possible investment vehicles which provide environmentally sustainable investment fund options to future donors, and to report annually Dalhousie’s holdings in publicly-traded securities.”

No discussion of the debates or other motions which were proposed from the floor regarding the divestment motion(s) are captured in these notes.