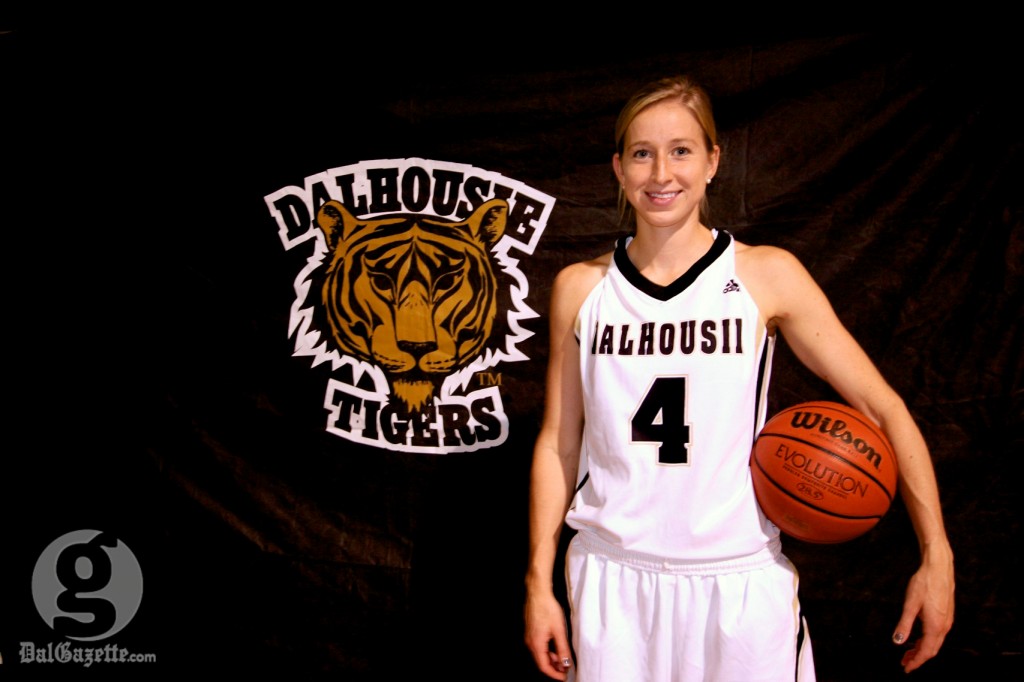 Anna von Maltzahn is no longer just a threat on the basketball court, but on the trail too. (Alice Hebb photo)

For the record, Anna von Maltzahn wears exhaustion well. She shows no signs of tiredness as she strides into the Dalplex to sit down with the Gazette.

Von Maltzahn, a fourth-year neuroscience major, decided to make her final year of schooling her most challenging one yet. She will not only be representing Dalhousie again in basketball, but on the cross-country team as well. Few student-athletes would be more qualified than von Maltzahn to take on this feat. She already has Academic All-Canadian recognition to her credit, won the 2012 Bluenose 10-kilometre marathon this past summer and claimed the 2012 AUS defensive player of the year award for her skills on the court.

Von Maltzahn, 21, has come a long way from what she describes as some of her earliest sport memories, playing in the streets with her older brother Alex.

“In terms of being on an actual team, I did some running starting in Grade 6,” recalls the Halifax native. “Even before that, I was playing on soccer teams.”

By the time she reached high school von Maltzahn, 5-11, was getting serious about basketball. She competed for Queen Elizabeth High School before the school merged with St. Patrick’s. After amalgamation, von Maltzahn was part of a newly formed Citadel squad that won the provincial championship in 2009.

Although she ran cross-country throughout high school, she had to choose a speciality. “After that, I was focused primarily on basketball. I’ve done the odd race but, in terms of consistently racing, I haven’t done that until this year.”

So, does von Maltzahn’s increased workload make her the busiest student around?

“Maybe,” she says after a while. “I like to think that because I have a handle on it, when I come to practice and I come to play our games people can’t tell that. I come with just as much energy as everyone else there. And even though I may be a little bit busier than everybody else there, they still are very, very busy in terms of balancing their work and being on a sports team.”

It also helps that she’s had time to adjust to being a varsity athlete.

“I’m in my fourth year,” she says. “A first-year student might not be able to handle that.”

Von Maltzahn isn’t fooling everybody, though. Her basketball coach Anna Stammberger worries about her co-captain overworking herself.

“It does take a little bit of her focus and her energy away from the team, but she makes up for it because of all that she does,” Stammberger says. “It’s not my favourite thing to have a person doing cross-country and basketball because she is tired sometimes and there’s a higher risk of injury. It’s a bit of a gamble in some ways.

“However, she’s a player who has given the program so much over the last three years. She’s paid her dues and put in the effort and deserves to have this opportunity to challenge herself.”

Stammberger is a Dal alumnus. She graduated in 1983 with a degree in physical education.

“I was here at Dal as a student-athlete,” said Stammberger, “and I actually also did cross-country and basketball. (Von Maltzahn) knew that so I couldn’t say, “that’s not possible!”

Conveniently, the AUS cross-country championship (Oct. 27) occurs on a weekend the basketball team has off. It also helps that the running season is short, ending with the CIS championship on Nov. 10. This is all before the basketball season comes into full swing.

“Otherwise it wouldn’t be possible,” Stammberger says. “She couldn’t do basketball and volleyball together, for example.”

A day in the life

Together von Maltzahn, Stammberger and cross-country coach Rich Lehman came up with a training schedule.

A typical day for the athlete starts at 7 a.m.

“Tuesdays are one of the days where I have a tough cross-country workout and a basketball workout,” von Maltzahn explains. “So, I wake up, I go to my class and then I come home and I have a couple hours to eat lunch and do work.”

Sounds simple enough. But then von Maltzahn jogs down to Point Pleasant Park for a cross-country workout. Two hours later she heads home to eat, again, and do some more school work. Then, basketball practice is from 5:30 to 7:30 p.m., after which von Maltzahn returns home to—what else—eat and do schoolwork before turning in.

“I go to bed as early as I can,” she adds. After all, there’s basketball practice again on Wednesday morning.

Von Maltzahn has quickly proven to be one of Dal’s leaders on the trail—despite her novice status. She was Dal’s top runner, in fifth place, at the season-opening Moncton Invitational last month, and has followed it up with two consecutive races as the second fastest Tiger.

She credits her self-discipline for her success, which comes from years of athletic involvement.

“I don’t think I would be as efficient as I am if it weren’t for athletics. Being on two teams makes me so disciplined in how I spend my time. I’m so certain that I need to use my free time that I do have for schoolwork, and so I do it. I don’t have the option of thinking, ‘Oh, I have some time later, I’ll do it then.’”

In addition to finding time, von Maltzahn has the motivation required to make dual-sportsmanship work. The things that drive her are simple.

“I’d say it’s the physical fitness and the people. And just because I’m so competitive it’s genuinely so much fun.

“There’s obviously very little time for social life,” she adds, “even less so than last year. So, it does affect my personal life, but the people in my personal life are so supportive of me.”

But does she have room in her schedule for a romantic relationship?

“Would I have time for one?” she wonders, chin in hand.

“Well, I always seem to think I can spread myself a little thinner,” she says with a laugh. “That’s hard to say. I am spread pretty thin right now.”

If anyone could make it work, we have a feeling it’d be Anna.