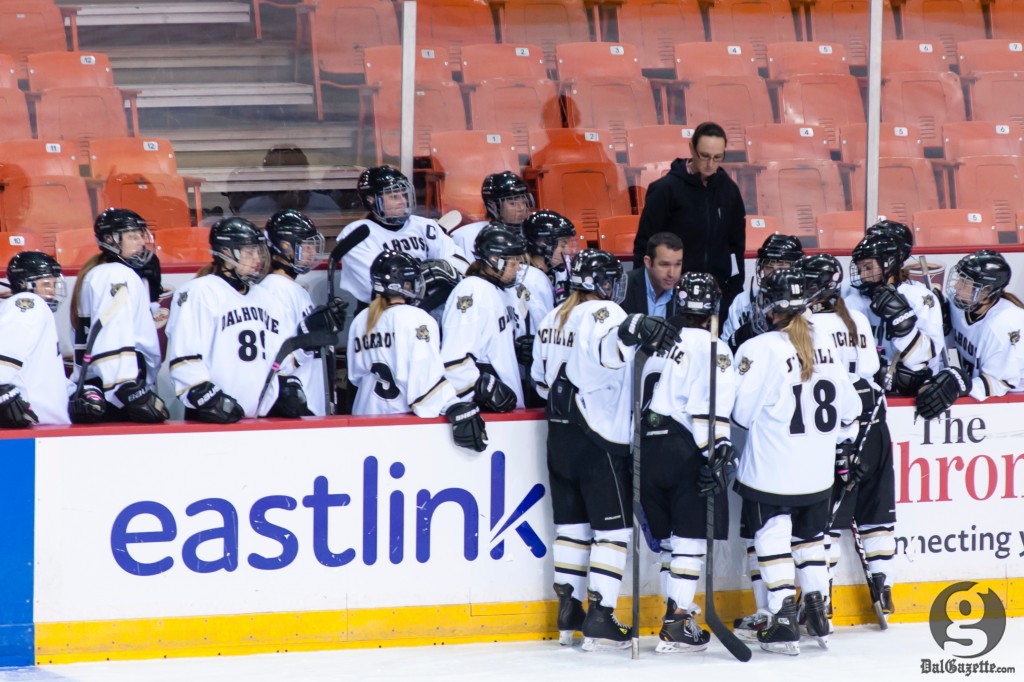 A player says the team is aware their hazing party was inappropriate, but she said there was “definitely no attempt to make anyone uncomfortable.” (Chris Parent photo)

The house party started as a way to bring the team together, a way for rookies to bond with veterans and have fun in the process.

But after the parent of a player made a complaint and a six-week investigation ensued, the Dalhousie women’s hockey team learned Thursday they have been forced to forfeit the rest of this season. All 19 non-rookie players were suspended.

Now a player is speaking out to set the record straight.

Team players have not let their voices be heard, even after news of the story first broke in October. They had signed a behavioural contract, which included a confidentiality agreement.

“We were not allowed to speak about the incident and anything that happened during the investigation,” said the non-rookie player, who didn’t want her name published to protect her from possible consequences imposed by the university. She spoke exclusively to The Dalhousie Gazette on Jan. 5.

The document appears at the bottom of this article.

“The behavioural contract was presented when we were at the rink waiting to head out on a road trip,” she said. “We were told everyone had to sign and get on the bus, that if we didn’t want to sign then we shouldn’t be on the team because this was important to cooperate with.”

The player did not feel comfortable signing the contract, but she went along with her team. The student athletes were not given a copy of the document they were signing.

“Many of us wanted to speak out, but we’ve been forced to watch as the media and the community have painted us as common criminals,” she said. “We’ve been harassed by phone calls while being caged up and unable to talk.”

The negative publicity has hurt the team’s image.

“I don’t feel comfortable even wearing my varsity jacket anymore. It’s tough when we were so proud to be called Tigers and show our Tiger pride, but now we’re forced to hide ourselves,” said the source, who is planning to get another jacket.

“It’s time our side of the story was told.”

What both sides have agreed on is that some form of hazing occurred, which is a breach of university protocol.

According to the player, first-year team members were told to dress in blazers, Dal-themed boxers and had their hair slicked back with Vaseline. Throughout the night, the team played drinking games. The rookies were asked to answer such questions as: Who is the prettiest girl on the team and why?

“If you’d shown up and not known it was a group of athletes, it could have been any other university party I’ve been to,” she said.

“There was nothing malicious and definitely no attempt to make anyone uncomfortable. It was like any other night where some of the team went downtown afterwards.

The university has not disclosed what their investigation revealed about the party, but Dal spokesperson Charles Crosby said on Friday the hazing ritual was a severe case where first-year players were hazed. It involved “drinking, humiliation, intimidation, personal disrespect—it was bullying,” he said.

But the team member disagrees with the university’s assessment. “We would never try and make a player feel less just for a laugh—we’re a family, where we tell each other everything. That’s what makes this situation so hard.”

The player said no one was forced to drink and that teammates were offered a place to stay if they needed somewhere to sleep.

“We know that we did something wrong and we’re not defending our actions,” she said. “We just want people to know how unfair the process was because we feel like we were lied to from the beginning.”

The interview portion of the school’s investigation was conducted at the end of October and happened over a two-week period, the player said. The team was asked about the hazing incident in depth.

“We were told if we answered truthfully and told them what happened, that the punishment would be lesser. Now our season is gone and we’re left picking up the pieces,” she said.

“It was awkward after the interviews had finished. We’d been forced to sign something to keep quiet and suddenly we weren’t even allowed to talk to our teammates about it.”

The Tigers did not hear about the results of the school’s investigation until the afternoon of Jan. 3. The team was brought together and told of their penalties shortly before the media was informed.

Team members from outside the province returned to Halifax to train for second semester play on Dec. 27, cutting into their vacation time with friends and family. Dal’s exhibition game against Saint Mary’s University at the end of the month would be the team’s last game of the season, and for some, their university careers, too.

Atlantic University Sport announced on the weekend that the dozen games left on Dal’s schedule would be scored as a 1-0 victory for the team the Tigers were scheduled to play against. As a result, the remaining six AUS teams will all qualify for the playoffs.

The player said they have received support from a member of the school’s athletics staff.

“They were disappointed by the decision. They thought that it would encourage a ‘don’t ask, don’t tell’ culture, where athletes would be scared to come forward [in the future] in fear of having their season cancelled.”

Unable to talk to their head coach because of the suspensions, the team is looking at their options on how to move forward. A decision on what to do next, which includes the possibility of fighting the infractions, has not been decided.