It didn’t take much for the Tigers to swim to yet another consecutive AUS title.

The women’s side ran away with it, totaling 466 points during the three-day tournament at the Dalplex. The next closest was the Acadia Axewomen with 212. The male Tigers, as well, won in impressive fashion, raking in 394 team points. Acadia once again was the next closet team with a modest 257.

The women were led by rookie Phoebe Lenderyou, who broke three different AUS records in the 50m backstroke, 100m butterfly and 200m individual medley. The previous butterfly record was set in 2002, while the individual medley record dated back to 1994. 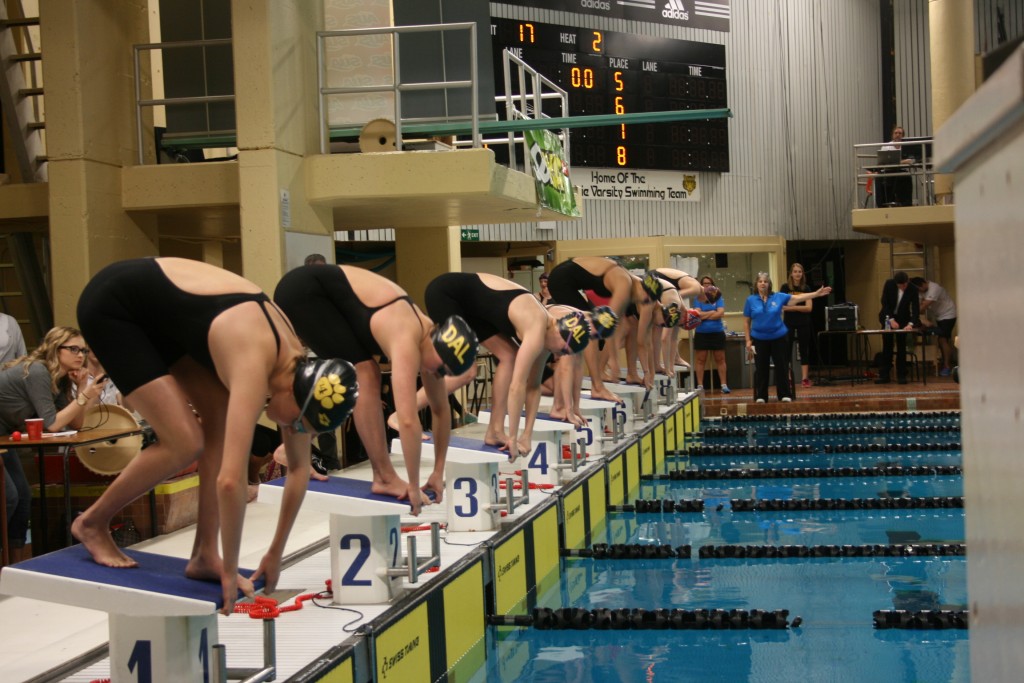 Dal’s Rachel Shin found herself breaking a AUS record of her own in the 400m medley. Shin earned her second gold of the weekend in the event, beating the 21-year AUS record by four seconds.

But Lenderyou and Shin weren’t the only ones who made waves for the women’s side over the weekend. Three other lady Tigers took home individual golds, including Paige Crowell in the 50m, 100m and 200m breaststroke, Katie Webster in the 400m and 800m freestyle, and Lucy Macleod in the 50m free- style.

Though the men didn’t see as many records broken as the women, they still coasted to an impressive win. Dal’s Gavin Dyke, Tony Liew, James Prophit and Kyle Watson all earned two individual gold medals each in their events.

The Tigers won all six relay events over the weekend, as well.

Acadia’s Rebecca MacPherson was named the female swimmer of the meet for claiming gold in the 100m and 200m backstroke, while teammate Luc Boudreau took home the male honour for making to the top of the podium in the 200m individual medley and the 100m and 200m breaststroke.

Memorial’s Owen Daly walked away with the men’s rookie of the meet, while MacPherson easily earned the honour on the women’s side.

The Tigers’ team win marks the 14th-straight title on the women and the 17th-straight for the men.

Twenty-one Tigers will now prepare for the 2015 CIS Swimming Championships at the University Of Victoria from Feb. 19-21. The men’s team currently sits sixth in the CIS rankings, while the women are ranked seventh.

The results shouldn’t have come as a surprise for the Tigers, as both teams have swept all three AUS meets this year.