Reunion on the road 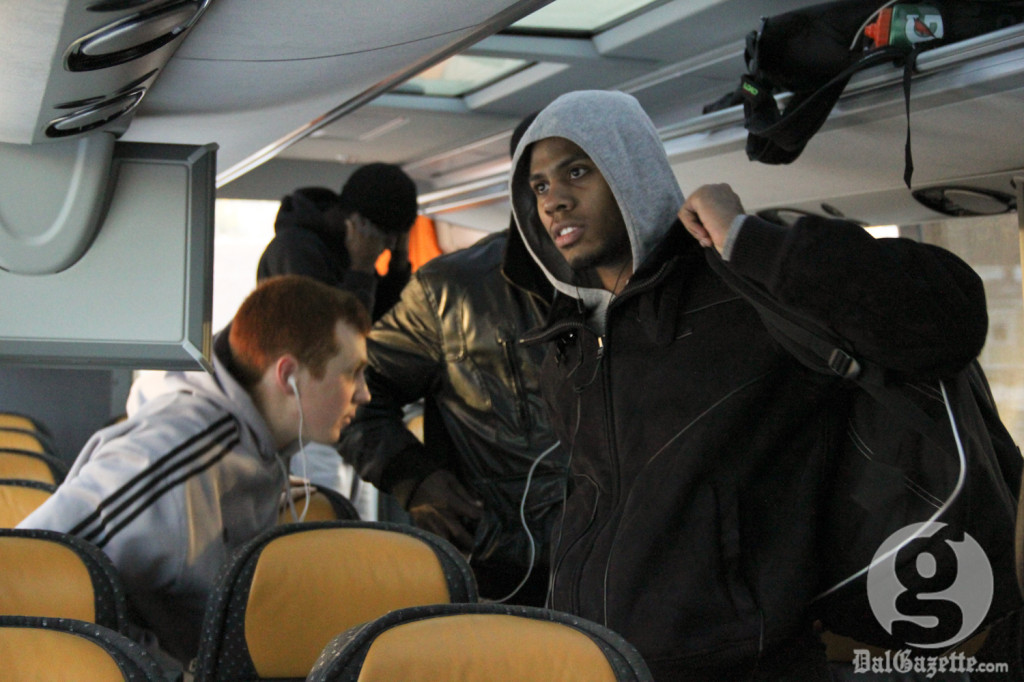 There are no goodbyes on a journey this short; it’s the hellos that matter.

After all, these are no solo travelers. Today, this season—perhaps always—the Tigers are family. And this trip is a family reunion.

The bus is scheduled to leave at 2:45 p.m. By 2:40, five or so bodies warm the seats, most of them filled by the coaching staff.

As for the players? “They trickle in,” says men’s head coach John Campbell, sheepishly.

And so they do.

Slap, slap! is the soundtrack as the bus fills. Players greet each other with high-fives as they find a spot. Coaches in front, guys on the left, girls on the right.

“NBA Will!” someone calls out as star forward William Yengue steps into view. The boys cackle as the 6-4 forward finds a seat toward the back.

“I want to do my homework,” he says to a round of laughter. “You have homework?” someone shoots back. The driver grabs his radio to solve Robinson’s problem, by which time the girls have filed in.

Head coach Anna Stammberger does a quick head count. “Why do I only have 10 players?” she asks.

“Maya’s in class,” the girls chant. 6-2 centre Maya Wold makes it just in time as the bus pulls out of the Dalplex parking lot.

At first, the chatter is incessant: “Carleton plays Ryerson tomorrow, big game.” “Are we actually leaving John?” “Is this real life?”

“It’s pretty out here,” a female player adds to the chorus as the bus glides over the highway. The Bedford Basin and the Windsor Marshlands flash by like a motion picture. Snow-capped evergreens add the only touch of life to an otherwise barren winter landscape.

The bus quiets down, and now music blares from a dozen sets of earbuds. Conversations happen between seatmates, no longer across aisles.

The rearview mirror says Campbell’s on the phone, his elbows resting on the back of the driver’s seat. Stammberger chats with forward Anna von Maltzahn, the coach’s silver hair bobbing animatedly as she discusses tactics with her captain.

Everyone’s settled in, and all that’s left to do is focus on where they’re going, and what will happen there. 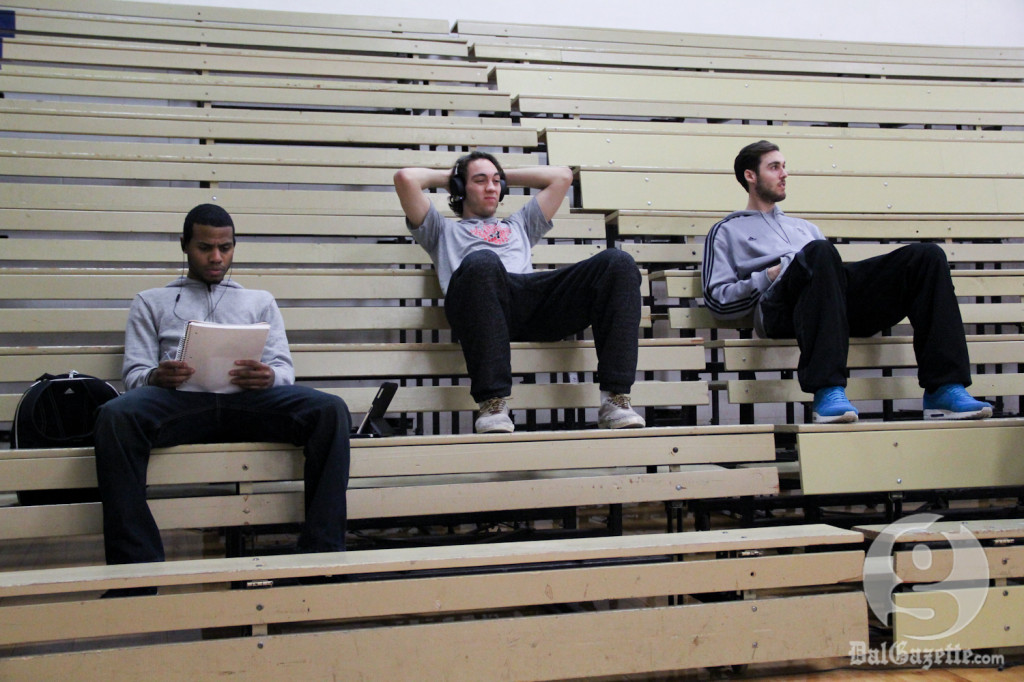 The men’s Tigers relax as their female counterparts take the court before their game. (Monica Mutale photo)

“Be back by first quarter,” Campbell instructs his team. It’s just after 4 p.m., and the girls have disappeared into the belly of the Acadia gym to prep for their 6 p.m. game.

Campbell’s team plays at 8 p.m., and has been let loose on the town of Wolfville. With two hours to kill and $20 each to spend on supper, they shuffle out of the men’s locker room and into the cold.

Wolfville’s restaurant district is small, but big enough for the team to split up. The coaches make their way to Rosie’s Restaurant and quietly fill a table for four. Derek Norris, Devon Stedman, Simon Marr, Ritchie Mata and trainer Haydie Wood fill a booth, poring over menus and iPhones simultaneously. Chidi Majok, Will Yengue and Matthew Morrison trickle into the wood-paneled eatery shortly after.

Mata isn’t playing. “I think I’ll just get a dessert,” he decides.

A Dalhousie classmate recognizes Norris, calling out his name.

Across the restaurant, Yengue’s tablemates taunt him similarly.

“He’s used to the celebrity treatment,” says Majok of Yengue, whose likeness appears on the exterior of the Dalplex.

The guys seat themselves among the home fans and behind the Tigers’ bench. Soon, they’re dressed themselves. Ready to watch, and then to play. 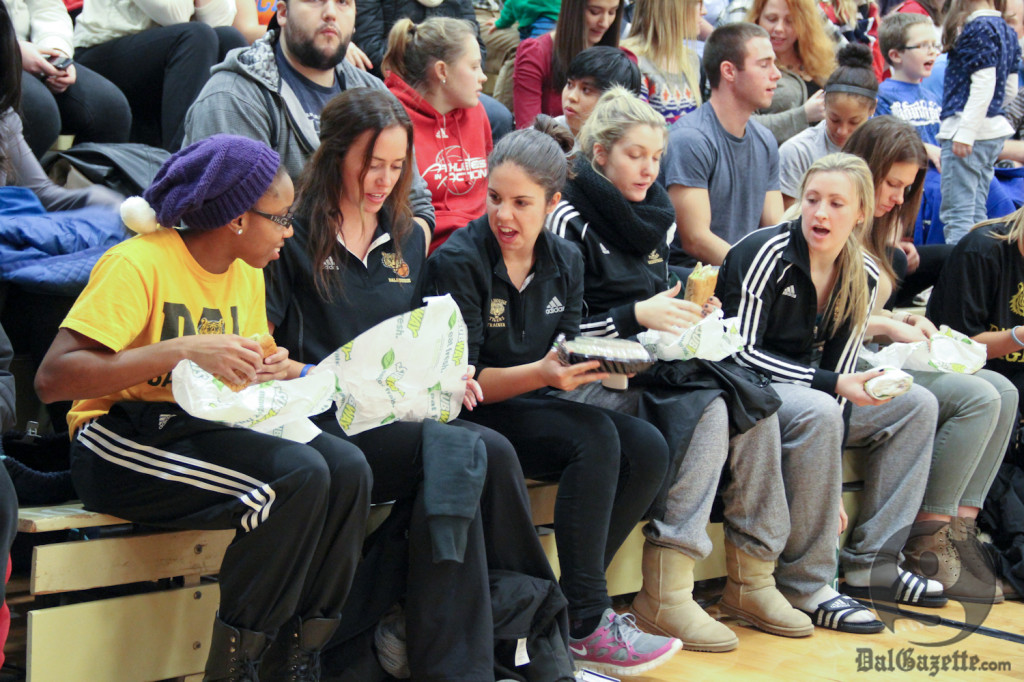 Women’s team members enjoy a light moment after their victory over the Axemen. (Monica Mutale photo)

Tipoff. Acadia scores first, but Dal soon goes up 4-3. They hold the lead until the end of the second quarter. Acadia ties it up at 38, finally taking the lead early in the third.

“C’mon, Courtney!” “Get it, Robbi!” Both sets of Tigers are on edge, watching a tight fourth quarter. Hannah Gonzales barely touches the bench; the petite guard shoots to her feet to lead the “De-fence!” chant every few minutes.

Keisha Brown racks up 19 points as Dal squeezes out a fourth-quarter lead. The final score, 73-67, boosts the Tigers in their fight for a spot in the playoffs.

Exhausted and exhilarated, the girls clear off the court and the guys, waiting in the wings, take over. The players are tense in this, their first game since a sweep of December’s Rod Shoveller Tournament.

The crowd is hyped for the match, too. The girls, returning with Subway sandwiches and civilian clothing, cram themselves in among the fans.

The Shoveller winners are down 23-14 by the start of the second quarter—in which they managed only five points.

The bench is quiet. Haydie Wood, Ritchie Mata and Keith Robinson lean forward, as though a miracle awaits at the far end of the gym.

The Tigers find no such good fortune. They outscore the Axemen in the fourth, but drop the game 79-57.

The girls, still gleeful after their win, figure John Campbell will keep the guys for a few minutes. The bus will take off as soon as everyone’s on board. 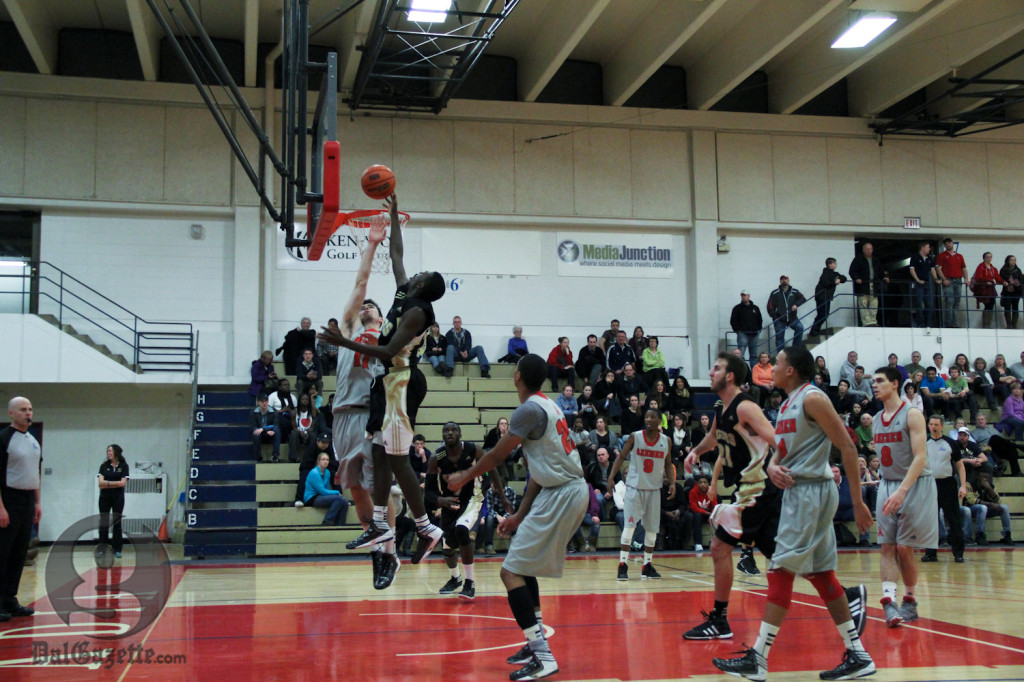 Music blares from a dozen headphones, but there’s little talking on this return trip. The reading lights are punched out one by one and, soon, there’s nothing left to do but reflect on the day’s events.

For the winners, there will be joy. For the losers, perhaps grief. Thankfully, both sentiments are best shared among family.