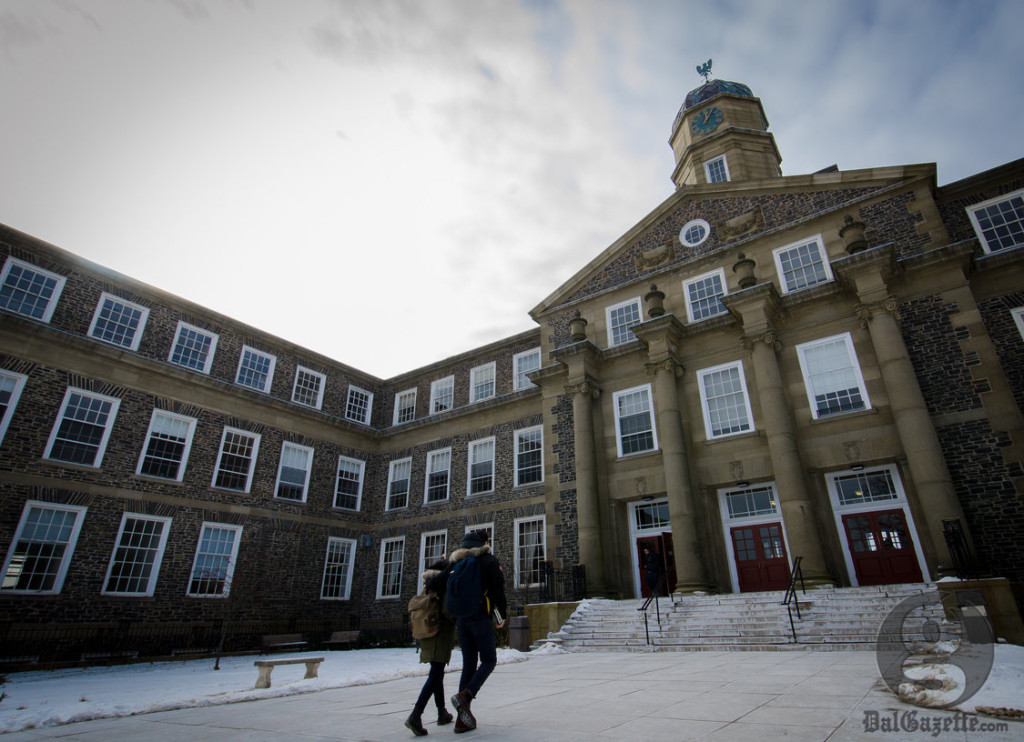 Tuition will go up for all students next year. (Calum Agnew photo)

With an anticipated $17.5 million dollar gap in its 2013-2014 budget, Dalhousie is looking for ways to cut spending.

Dal faces a three per cent, or $4.9 million, cut to its government operating grant. The university will also spend $13.7 million dollars more than last year on staffing costs and pension contributions.

Most students will see their tuition rise by three per cent next year, the maximum allowed under the Memorandum of Understanding (MOU) signed by Dal and the province in December 2011.  But this does little to offset the increased costs: tuition would need to increase by over $1,000 per student for the gap to be closed by tuition increases alone.

Carolyn Watters is vice president (academic) at Dal, and chairs the budget advisory committee (BAC), which is responsible for presenting a balanced budget to the Board of Governors.

“After a period of 10 years of growth and robust funding, there’s been a little bit of a reality check,” says Watters.

The Dal Student Union (DSU) and Students NS, the provincial lobbying group for a number of student unions, issued a press release criticizing the Dal administration for not dealing with the projected deficit earlier. Jamie Arron is the president of the DSU.

“The deficit amounts to almost $1,000 dollars for every Dal student, and we’re being led to believe it came upon the university suddenly and was largely beyond their control,” said Arron in the press release. “We are deeply concerned about how this will affect students and the university community at large.”

“This case shows a serious lack of institutional transparency and accountability—the university must have known much earlier that this deficit was coming and decided not to avoid it, because it is simply unbelievable that they didn’t see the signs,” said Jonathan Williams, the executive director of Students NS.

But Watters says that the university has been preparing for these cuts for a long time.

“Students were a little disappointed that we were surprised about this. Didn’t we see it coming?” she says. “Well, of course. We’ve been planning for three years. So the faculties have been building in government cuts all the way along.”

The administration has been soliciting feedback on the budgeting process. The BAC held an online town hall on Jan. 24 to get a sense of the community’s concerns. Watters says the meeting was helpful.

“This is a process of saying: ‘What are the priorities and choices of the people affected by how we close the gap?’” says Watters. Some students took issue with Dal’s continued construction despite the financial pressures facing the university, and the threat of tuition increases over 3 per cent for students in professional programs not covered by the MOU.

The DSU is also upset by the lack of union representation on the BAC, where the recommendations to the board will ultimately be made.

“It is simply unacceptable that there is no student union representative on the BAC,” said Arron in the press release. “Students are being asked to share the financial burden through increased fees and reduced programming, but we’re being shut out of the room where decisions are being made.”

Although there is a student representative on the BAC, he was not appointed by the union. Watters says that no member of the BAC represents a particular interest group, such as the DSU or the Dal Faculty Association.

“Everyone is there as community members, not representatives,” says Watters, “and there’s no reason that the DSU couldn’t nominate someone.”

The gap will probably be closed through a combination of tuition increases. budget cuts, and by dipping into reserve funds. Whatever happens, students will be paying more, and receiving less next year.

Watters says the budget gap is part of the university entering a period of less robust growth and funding availability.

“We have to be more reliant on our own processes for evolution and resource allocation,” says Watters. “At the same time, I think the government needs to step up: if the government wants excellent university systems, they can’t starve them to death.”