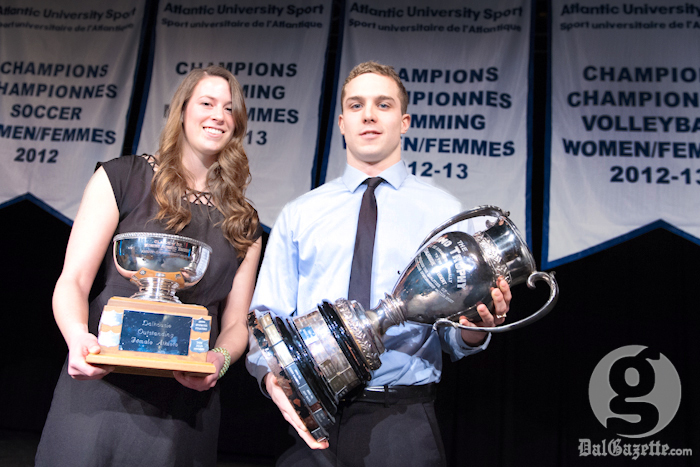 A pair of familiar faces garnered Dalhousie athlete of the year honours for the second time in their university careers Mar. 27 at the Black and Gold Athletic Awards Banquet.

Soccer defender Rieka Santilli was recognized as top female athlete for two years running and swimmer David Sharpe followed up on the male athlete of the year award he earned as a rookie in 2009-2010.

Santilli deflected recognition after the banquet to her team, grateful to repeat as Atlantic champion in her last season wearing the black and gold.

“I have some of the best teammates in the AUS. They make me look good,” she says. “I owe them a round of drinks tonight.”

In her second campaign as team captain, Santilli led the Tigers with six goals, good for second in AUS scoring. The graduate was named a conference MVP and a CIS first team all-Canadian.

Olympic swimmer David Sharpe also returned to the podium as a two-time athlete of the year.

The 2013 banquet, however, is the first time Sharpe has actually been in the McInnes room for the yearly celebration. He was previously competing in national competitions at the time.

“It’s special more so being here tonight than getting the award,” says the 22-year-old. “To be here with my teammates to wrap up the year—it’s really special.”

The fourth-year acquired three CIS medals and set a staggering seven Dalhousie, AUS and Nova Scotia records in the pool.

Other notable winners at the banquet include women’s high jumper Rebecca Haworth, who was recognized for her success in the athletic, academic and community realms. She won the AUS James Bayer Memorial Scholarship Award and shared the President’s Award with dual-sport athletes Anna von Maltzahn and Rob McCulloch.

Retired swimming coach David Fry earned the prestigious A.J. Sandy Young Award for contribution to Nova Scotia sport. During his 16-year tenure as Tigers head coach (which ended in 2012), he amassed a tremendous 30 conference titles. Fry began his coaching career at Dal in 1981.

The banquet also included presentations to the most valuable player on every team—except for women’s hockey. The program was suspended in January for the rest of the season after hosting an alcohol-fuelled rookie party.