Tigers leave competition in the dust 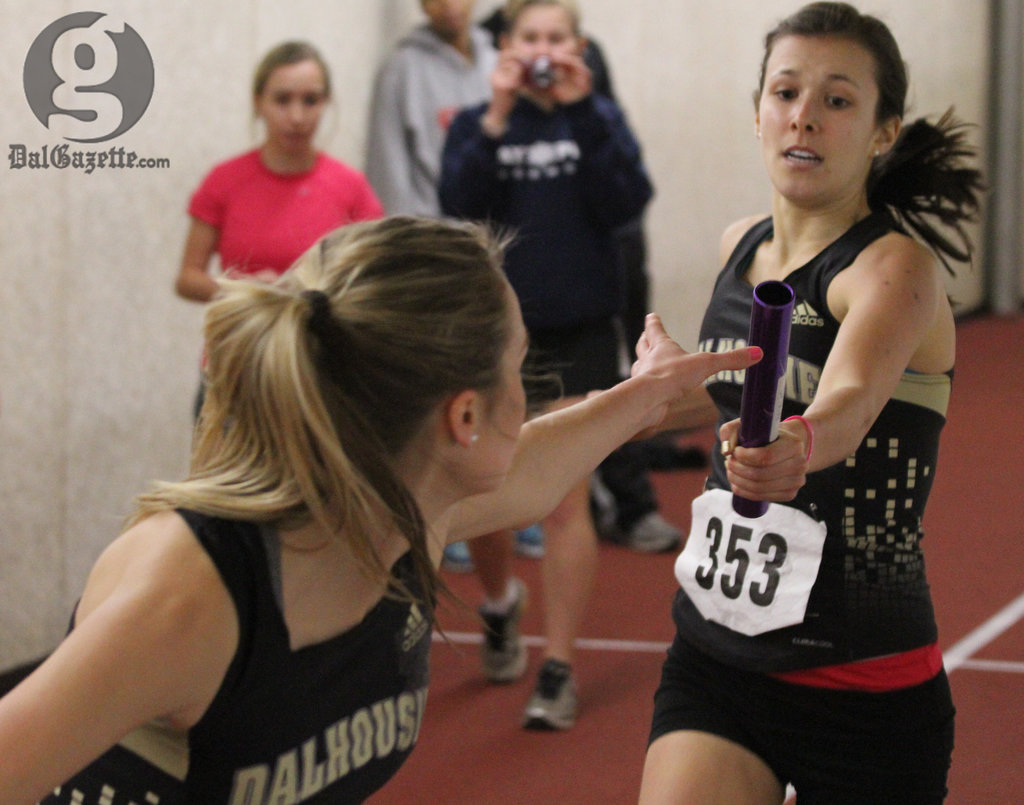 Vanessa Linton hands off the baton to Britany MacArthur in Dal’s winning race in the women’s 4×800- metre. (Bryn Karcha photo)

The Dalhousie track and field team was the undisputed champion of the Tiger Track Classic last weekend at the Dalplex.

Facing competitors from St. Francis Xavier, Saint Mary’s and Acadia, Dal managed to win most of the events they competed in as they prepare for the AUS championship Feb. 23-24 in Moncton.

“We had a lot of personal bests,” says Rich Lehman, the Tigers head coach. “For the 60-metre we had an all-Dal final which was pretty sweet. Jumps, we didn’t have many of our top jumpers competing this weekend, but still pretty solid, and our throwers are always good. We’re looking good going into AUS this weekend.”

While not every member of other university teams could attend the meet to pose a greater challenge for Dal, Lehman says he’s confident the Tigers will perform well at the AUS championship.

“I still expect to win easily next weekend,” he says.

Dal’s women’s team has won 23 consecutive AUS banners, while the men have earned the nod 11 times.

Highlights at Dal’s premier track meet included Adam Lewis finishing first in the 60-metre final, as well as winning the men’s 300-metre with a time of 36.6 seconds. Matt Bartley took second in the 60-metre, his first race of the season since coming off an injury.

Matt McNeil crossed the line in first in the men’s 3000-metre, and also set a personal best for the 1500-metre, coming in second. Rookie Heather Grandy won the women’s triple jump with her best jump of the season.

Fourth-year runner Lesley d’Apollonia soundly defeated her competitors in the women’s 300-metre, finishing with a personal best of 40.5 seconds, nearly a second faster than anyone else.

“You gotta go into racing knowing that you’re gonna win, and not be afraid of the race,” says d’Apollonia. “Because if you become afraid of the race, that will affect your running and you’ll be tight, not confident. You won’t be able to pass somebody.”

Around 195 athletes competed in the weekend event. University students were joined by several high school and post-collegiate competitors.

There was also a ‘pros vs. joes’ relay event last Saturday where Tigers athletes in basketball, soccer and hockey competed against each other, while other Dal students and some of the track and field coaches took part.

“It was a lot of fun,” Lehman says. “We’ll try to make it a little bigger next year. Maybe include some alumni.”