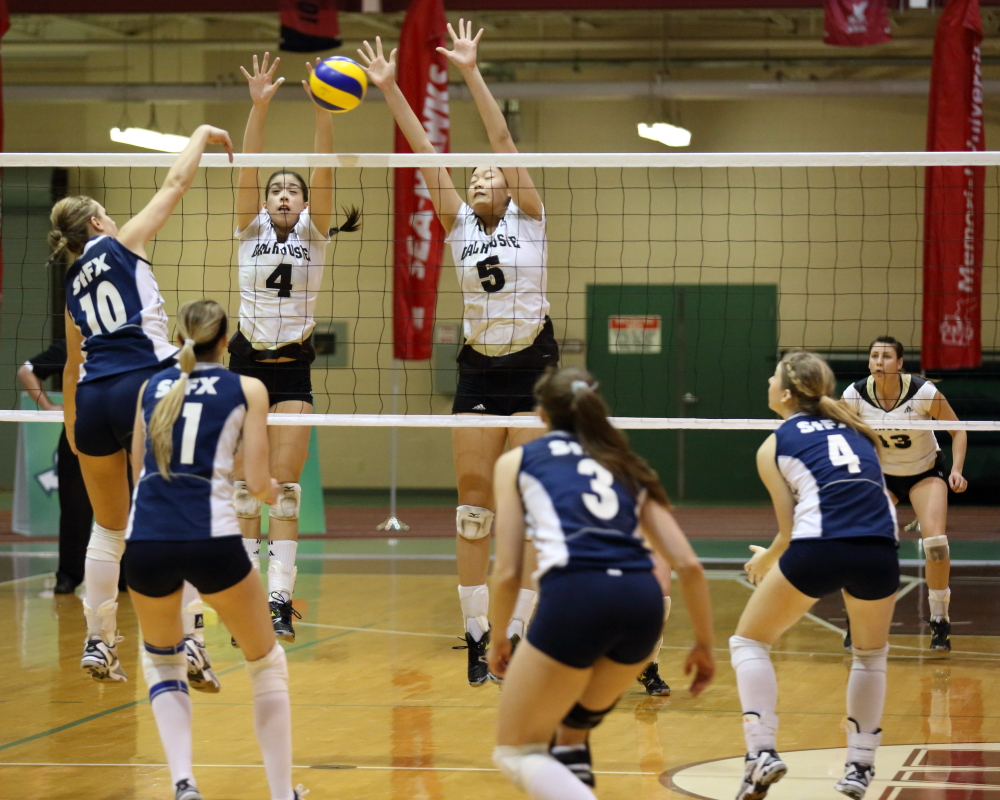 Hilary Sears and Maggie Li came up big for the Tigers in their semifinal victory. (Darek Nakonieczny via NLsportphoto.com)

Entering the championship tournament at Memorial University as the top seed, the Dalhousie women’s volleyball team have expectations of winning their first AUS title since 2005.

The Tigers are now one step closer to claiming that elusive league crown after defeating St. Francis Xavier in straight sets to secure a berth in the final Sunday at 1:30 p.m.

This is Dal’s opportunity to avenge their 3-1 loss to Saint Mary’s in a rematch of last year’s final.

The match did not start off ideally for the Tigers, who earned a bye into the semifinals thanks to an undefeated season. The X-Women, fresh off a thrilling five-set victory over UNB the night before, put pressure on Dal, keeping the game close with exceptional defence.

The first set went into extra points, with the Tigers eking out a 26-24 victory propelled by the offensive output of Tara Gowan and Maggie Li.

The opening win seemed to settle the inconsistent Tigers, who took control right off the bat in the second set with a 9-1 lead. Petra Rafuse was the catalyst for this run, with eight serves in a row to put significant distance between them and St. FX.

The X-Women tried to chip away at the lead, but were silenced by the thunderous kills of Gowan as the Tigers handily won 25-10.

Sensing that their season was in jeopardy, St. FX rebounded in the third set with renewed hustle, managing to keep the game close. The Tigers pulled away after a costly X-Women error with the score tied at 14-14 to win the deciding set 25-17.

The third set belonged to Tigers captain Louise Facca, leading all players with 15 kills in the match. The fifth-year senior, who also won the inaugural Erin Bursey Memorial Leadership Award this week for student athlete community service, effectively mixed powerful hits with off-speed shots to close out St. FX and send Dal to the final for a second consecutive year.