A humourous revelation of Indigenous issues

In Anishinaabe stories, Nanabozho is a trickster, a spirit who can transform into any form, any gender. Nanabozho collapses boundaries between male and female, humour and seriousness, disciplined and free.

The exhibit Nanabozho’s Sisters – which runs from Oct. 12-25 at the Dalhousie Art Gallery – aims to highlight the spirit of Nanabozho and unite their comedic nature with the serious goal of showcasing Indigenous women’s experiences.

The gallery is exhibiting art made by Indigenous women that uses satire and humour to analyze identity and highlight the struggles faced by Indigenous women, such as the “Indian Princess” stereotype. The show is a group show, featuring eight artists, curated by Wanda Naibush the first curator of Indigenous art at the Art Gallery of Ontario.

In a statement about the show, Naibush describes the spirit of Nanabozho as “the freedom to be whoever one wants to be outside the prescriptions and oppressions of colonialism, sexism, and hetero-normativity is created through imagination, satire, and ironic reversals.”

One standout is Ojibwe artist Rebecca Belmore, who delivers a scathing critique of Indigenous stereotypes in her performance piece “(High-Tech) Teepee Trauma Mama.” By taking stereotypes often used comedically and twisting them, Belmore shows the horror and violence that these stereotypes perpetuate on Indigenous people, and specifically women.

Belmore does not try to censor herself in the character of “Teepee Trauma Mama.” By forcing her audiences to become uncomfortable, she pushes them to consider the stereotypes of Indigenous people that they still hold in their mind.

Other pieces in the show adhere more to the standard gallery fare, of paintings and photographs on a wall, yet are subversive in their content. They fall in line with Naibush’ goal of “[presenting] a more realistic view of Indigenous women’s bodies in all their lived glory.”

One such photograph is “The Rebel” by Shelley Niro, which shows the artist’s mother posed on top of a sports car like a model. The name refers not only to the make of the car, but also the actions that Niro’s mother is taking. By positioning herself as a model she rebels against western, colonial beauty standards, and takes charge of her power as an Indigenous woman. This is another theme that features prominently in the show.

Ursula Johnson also produces an exceptional piece for the show. Based around recent conversations regarding cultural appropriation, notably of Indigenous culture by large corporations, Johnson photographs Indigenous artists in clothes that feature culturally appropriative insignia, and overlays text of things they have been told about their own culture.

Over an image of Lori Blondeau, another artist featured in this show, Blondeau recounts being told, “You could have been an Indian Princess if you weren’t so fat.”

From behind this derogatory quote, Blondeau smiles and flexes her arms in a bikini, she laughs off the cruelty because she carries her own strength inside her. 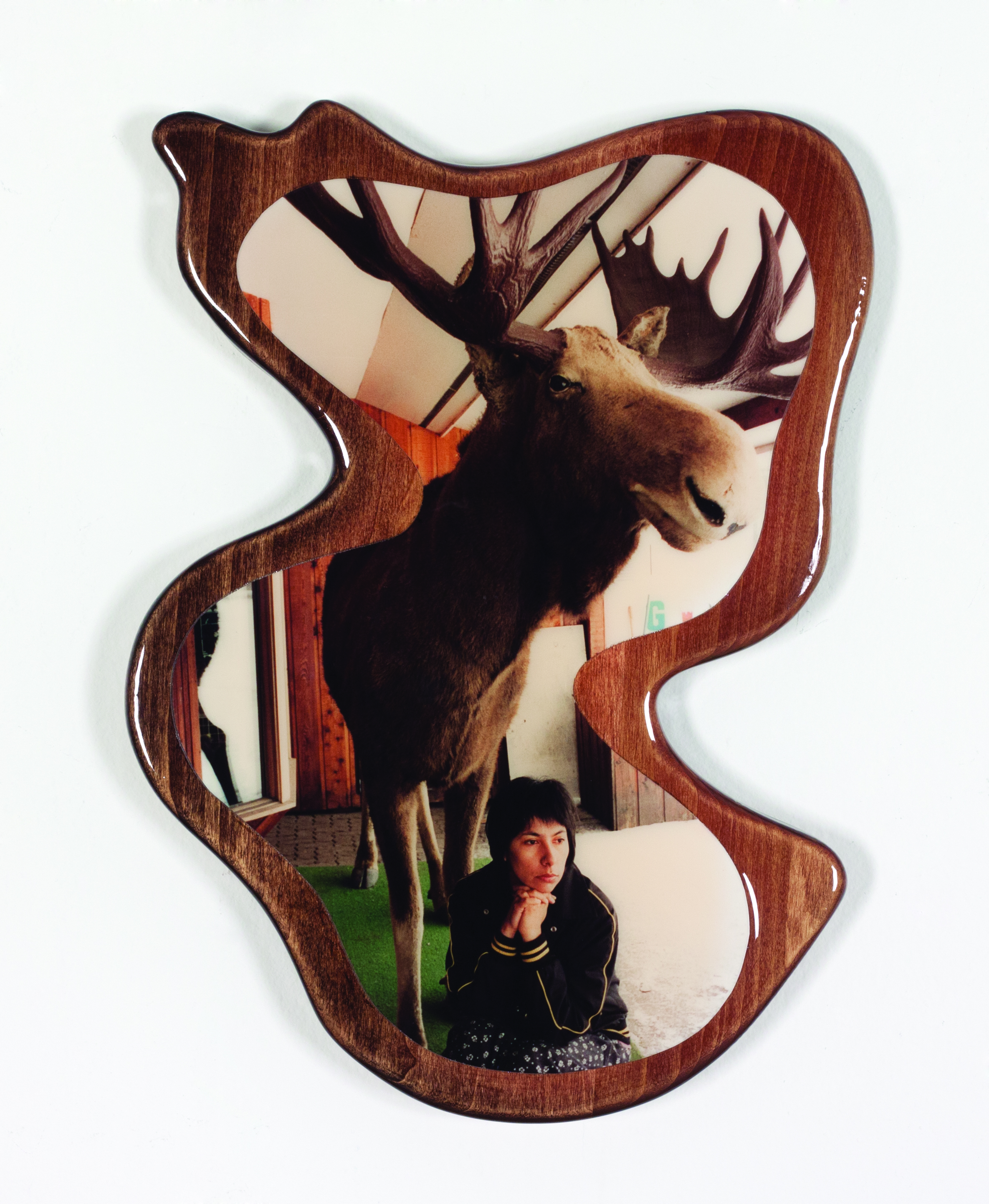 Many other incredible women artists are featured, all with a unique yet coherent take on the modern Indigenous female identity, but also with an eye for humour and satire. Far from a negative drudge of the horror of modern life the humour acts as the sugar that coats the bitter pill. Humour works to make ideas that may be new to audiences easier to consider. For those who are well versed in Indigenous studies, this show offers a way to get to know the women who are working as artists and activists in their communities today.

Far from tame landscapes or still life’s, the exhibits in the show are provocative and feature real issues faced by Indigenous women, discussing racism and sexism from an intersectional perspective.

The show does not aim to please, but spark thought about the narratives we are given by settlers and how we can disrupt those, and help people who face the real, tangible effects of colonialism.

As Naibush puts it “These artists throw the weight of colonial representations onto the fire and dance us into a new future.”