An interview with the Rural Alberta Advantage 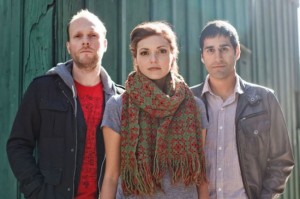 They come like a billowing tumult—a harbinger of melodic, melodramatic catharsis. The Rural Alberta Advantage are a complex upheaval of rhetoric, washing out all the old turns of phrase. “If there’s any sort of semblance of a theme with us, it’s a kind of drone of personal longing,” admits Nils Edenloff, the gravel-voiced mouthpiece and guitarist of the band.

A savagely dedicated outfit, the Rural Alberta Advantage have been extensively touring and writing for the past six years, slowly solidifying an enviable place in the miasma of great Canadian indie-rock. “There were a huge number of chance encounters along the way,” admits Edenloff about the band’s evolution “We had a lot of great music blogs championing us from day one. It all just kind of snowballed and we ended up heading down to play South by Southwest (…) Everything kind of took off from there.”

Self-releasing their 2008 debut Hometowns before getting snatched up by contemplative indie label hard-hitters Saddle Creek and Paper Bag Records, the band showcased a cascade of reckless, unbridled nostalgia. Pairing Edenloff’s sharp tongued musings with drummer Paul Banwatt’s deranged, tribal drumming and the bereft sweetness of multi-instrumentalist Amy Cole’s featherlight ambient textures, their debut was a seething, melancholic revelry. The album expounded on the cataclysms of small-town nostalgia and finding yourself flung into the world around you.

Earlier this year, after a two year marathon of touring and tying together new material, the band followed up with their sophomore album Departing. Picking up, spiritually, where Hometowns left off, Departing is an icier, more contemplative counterpart to the immediacy and idioms of their debut.

“Hometowns was essentially about me moving to Toronto and starting to play with Paul and Amy” explains Edenloff, “A lot of those songs that came out on Hometowns, they spawned songs on Departed, so I have a very personal connection to them in an equal sense. They’re meant to be a counterpoint—kind of a conclusion. We learned Hometowns as we went in the studio, but Departing, we learned mostly from touring and rehearsing, and I think because of that, we were much more comfortable with the songs, we let them develop naturally instead of approaching everything in studio, wide-eyed and exuberant. Being away from it all, touring constantly, it certainly has a profound effect on what and how we’re all feeling.”

As a result of workhorse ethics and garnering enthusiastic and unanimous praise from the press, the sparse and humble three piece were longlisted for the 2011 Polaris Prize. “It was an honor even to be considered,” says Edenloff. “Seeing us listed with so many bands that I listen to and that I think do such amazing things. Canadian music just keeps getting better and better, and I think Polaris has a huge part in that.”

Embodying an aggressive, organic aesthetic, the band is driven largely by Banwatt’s frenzied beats and Edenloff’s thrashing acoustic guitar with Amy Cole’s sirenic vocals and stuttering keyboards weaving through the rough and tumble clamour and clangor, leaving everything shimmering wildly.

“Structurally and theoretically I guess we’re a pretty sparse band” says Edenloff, chuckling in reference to the trio’s raw and ragged sound. “We’ve tried getting some other people in to flesh out the sound, but it just didn’t work. Playing together, we’ve learned to make up for our deficiencies, so adding something else into that mix just misrepresents us; it doesn’t lend itself well to who we are as a band.”

Storming St. Matthew’s on Oct. 22 for Pop Explosion, the band is bringing their charasmatic, thundering live show to Halifax for the first time since their raucous, spitfire set at Pop Explosion in 2008, and were adamant in proclaiming their love for Halifax and their guilt for not getting back here sooner.

“The last few years have been a whirlwind for us and we all have other projects we’re swamped with, too. But recently we had a little downtime and this seemed like a perfect opportunity, so we’re trying our best to get new stuff together for Pop Explosion,” says Edenloff. “I think the last time we were here we played Coconut Grove? Yeah, that was kind of weird. But honestly, wherever we play, even if it’s just for a handful of people and our friends, we’re just completely immersed in it. We love it. You’d have to be crazy not to love it.”