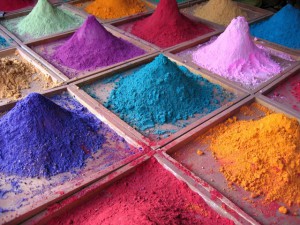 “It’s been in planning for about four years now,” she laughs.

So how did it all come together? According to Landriault, it took a lot of emails, and a lot of willing volunteers from partner charities WUSC, Amnesty International, Invisible Children and Giving Voice to Hope.

The evening featured clothes from five areas of the globe: Europe, Asia, the Middle East, Africa and Latin and Central America, along with talks from each of the charities’ presidents.

The event went off without a hitch, much to the relief of Landriault, the beaming main organizer.

I managed to snag a few moments of her time during intermission, between fielding technical issues and being congratulated by friends and observers.

“It’s going really smooth,” she confided in happy disbelief, “and it’s so personal to me, it really does feel good.”

Part of the personal aspect, Landriault explained in her opening comments, is that this year is the culmination of her journey through her four-year IDS degree.

She hopes the tradition of an international fashion show will be continued after she is gone.

“The first year is always the hardest,” says Landriault, “so we’ve got that out of the way.”

Hopefully the momentum the event has gained from its buzz, including an interview with CTV the day before the show, will keep the idea running in to the future.

But how did Landriault come up with the idea for an international fashion show event in the first place?

“It’s a hot topic,” she says. “It’s a great medium for a global showcase, and it draws a big audience.”

It’s true. The student pub was filled to the brim with viewers, so much so that I had to create a makeshift seat awkwardly crammed between and table and couch.

But it was worth it. The romantic fashionista in my heart loves the entire idea of the show: fashion without borders.

No matter what the culture, everyone appreciates a good cut and finely crafted pattern.

And there were many great styles and patterns on the catwalk—from saris to alpaca ponchos—all sourced from the greater international community surrounding Dalhousie.

It was a heartfelt night, and one that will hopefully become a new recurring facet of Dalhousie’s fashion culture.