Lessons from space: Chris Hadfield shares his story with Dal 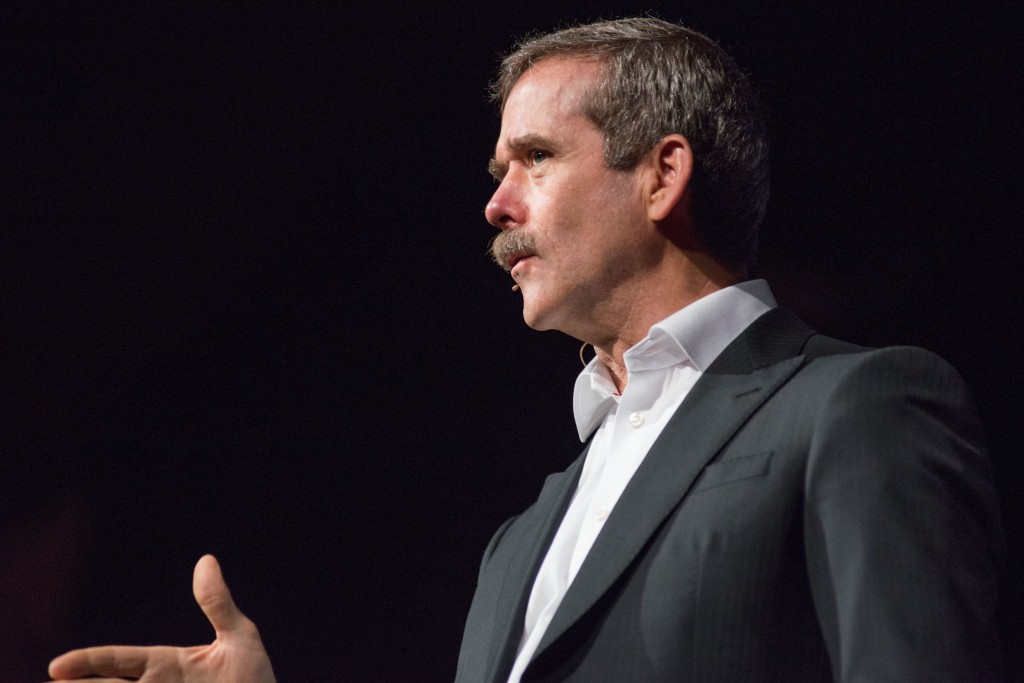 “First I’ll tell a story… what story should I tell?

No doubt Chris Hadfield has more than a few. Over 500 students left the libraries and filled the crowd to hear Hadfield speak at Dalhousie on Apr. 7. The astronaut spoke not only about his time in space, but of the hard work it took to get there.

Dalhousie students also had to work hard to bring Chris Hadfield to Halifax. They made it happen by raising the most money per capita for Movember, a campaign to raise awareness for men’s health. The prize was a visit from Chris Hadfield himself.

From sitting in his pretend rocket ship—a Quaker Oats box—to captaining the International Space Station, Hadfield has learned some hard lessons along the way to achieving his goals.

When it comes to achieving any goal, Hadfield says, “The key is to have a great time along the way. Don’t make that final thing be your definition of success.”

Dalhousie’s own President Florizone was rejected by the Canadian Space Agency in 1992, but he is doing just fine here in Halifax.

For many of us, a university education is expected. But as Hadfield points out, it’s also a privilege.

“The ability to get an education like this is a dream for most people around the world. The reason I mention it is to remind you that now, you owe somebody … sure, you have to pay your debts and you have to get established in life, but you owe somebody else an education,” says Hadfield. “Make sure at some point in your life that you take the effort to enable somebody else to get an equivalent opportunity.”

He makes a point of passing on his knowledge wherever he goes. Ready to take on his position as a professor of Aviation at the University of Waterloo, Hadfield is no stranger to teaching. He has been passing on his experience for the last 21 years, in classroom lectures, the astronaut office, and even on Twitter.

“I feel an obligation not to keep the experience to myself,” says Hadfield about sharing what he has learned.

His key to keeping focused is constant learning and skill-building. Of his own journey, he says, “I’m just so excited now because I’m not all wrapped up flying spaceships. I have time maybe to learn some new stuff.”

“The things that you’ve been doing these last few years here at school are vital to your life, and your own capability to build a platform of competence is absolutely fundamental to success. And it’s a choice you’ve made … and it will set you up for things you haven’t even dreamed of.”

Every now and then, we take our opportunities at university for granted. We all get bored with our day-to-day routines. It’s easy to get caught up in life and forget that while we’re here, we get the opportunity to learn something new everyday.

Let’s all take a page from Hadfield’s book and keep learning at every chance we get, and not forget to teach others along the way. Such is the lesson from an astronaut to those of us on Earth.

Editor’s Note: Samantha Begelfor was part of the Movember team whose fundraising led to Chris Hadfield’s appearance at Dalhousie.