"Getting a tattoo is minuscule in the face of the crisis we’re in.”

Student activists at Dalhousie University made a permanent statement about climate change on Monday.

Fifteen students had three-digit numbers tattooed on their bodies — ink they are referring to as “birthmarks.” The numbers represent the amount of carbon in the atmosphere in the year they were born.

Hannah Mills, who was born in 1993, had the number 357 tattooed on her shoulder. “Most of the students getting tattoos today were born into an unstable climate,” said Mills, a member of Divest Dal, the environmental justice group behind the tattoo event. “Climate change is going to have a permanent impact on our lives. Getting a tattoo is minuscule in the face of the crisis we’re in.” 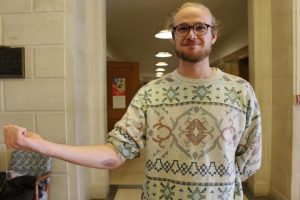 Alex Coley with his “birthmark” tattoo.

Alex Coley, who was also born in 1993, had the number 357 tattooed on his forearm. He studies sustainability and biology at Dalhousie. Cimate change is “the most important and pressing issue of our day,” he said. “This tattoo is a sign of my commitment to a community that is willing to spend our lives fighting for the environment.”

Stick-and-poke artist Mia Feldbruegge, who is also a student, volunteered her time to do the tattoo work. She spent around 20 minutes on each person. Mills said way more students signed up for tattoos than the organizers expected.

“We have so many people who want a tattoo that we can’t do everyone in one day. We’ve been blown away by the response to this,” she said. Divest Dal is planning a second event to fulfill the requests. 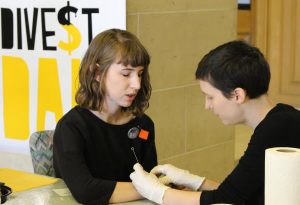 The organizers also drew Sharpie numbers on anyone who wanted to participate but did not want permanent ink.

The event took place in the same building as Dalhousie president Richard Florizone’s office. Divest Dal members offered Florizone a Sharpie tattoo when he walked by the group Monday afternoon, but he declined.

Florizone also refused student organizers’ request to talk about divestment. He said he had a meeting to attend and “has already discussed divestment at length.”

Since 2013, Divest Dal has been calling on the university to remove its investments in the fossil fuel industry and redirect the money into sustainable industries. Dalhousie’s board of governors voted against a proposal to divest from fossil fuels in 2014.

The fight against fossil fuels is a global movement. Monday’s tattoo event was inspired by a similar protest inside London’s Tate Britain gallery in 2015, where 35 climate change activists received tattoos before UN climate talks in Paris.