Born and raised in the North End, Lindell Smith wants to bring change to District 8

Walking down Gottingen Street with Lindell Smith is a social event. Drivers honk and wave out the windows. Passersby give thumbs up, while others stop for handshakes, hugs and high-fives.

“I didn’t think I would have so much support, and that people would be so welcoming and excited to see a young person from the district run,” says Smith, one of seven candidates running for District 8- Peninsula North.

“So that’s been a great surprise, and I’m very thankful,” he says.

Smith, 26, grew up in Uniacke Square, and understands the complexities of the diverse North End district.

He works as a community library assistant at the Halifax North Memorial Public Library, where he focuses on community outreach and youth engagement. He also co-founded Centreline Studio, a not-for-profit recording studio for youth in Uniacke Square.

“Lindell is a staple in the community. He’s not just doing it because he’s running – he’s really invested, and he’s always been invested,” says Alyssa Gerhardt, a volunteer on his campaign.

Smith greets each person he sees on the street with a wave and a smile; he usually knows their names and asks about their family, work or a recent milestone. 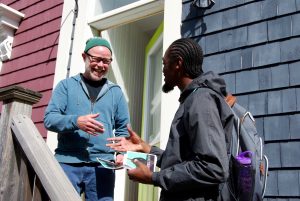 This genuine enthusiasm extends to people far beyond Smith’s friends and supporters.

On the other side of the road a man is unlocking his bike: Brenden Sommerhalder, one of Smith’s six competitors for the District 8 seat. Smith greets Sommerhalder with an enthusiastic pat on the back, and the two joke like old friends.

The crowded field means that every vote will count for these two men, but they have not let rivalry spoil their campaigns. Sommerhalder and Smith even delivered a joint presentation to a Grade 6 class at Saint Joseph’s-Alexander McKay Elementary School.

Briony Carros, a parent at the school, says she has been impressed with Smith’s “positive message” during the campaign.

“Some of the concerns that he had about what’s going on in the North End were really in line with things that I had been thinking about,” she says.

Smith’s campaign promises include promoting responsible development in the North End, making the community safer and more accessible, and creating opportunities for young people in the area.

The community feel of the North End is visible throughout Smith’s campaign; at each door where there’s no answer, he leaves behind a leaflet, a magnet, and a hand-written Post-It note saying “Sorry I missed you.”

These personal touches form the heart of Smith’s message. His bid for District 8 was inspired by his own experiences growing up in the community, and by a desire to give a voice to “a community which has been not part of the process and has been yearning to be part of it,” he says.

Throughout the district, Smith has received encouragement. His campaign manager, Jalana Lewis, recalls walking into a neighbourhood coffee shop with a stack of Smith’s campaign signs, and seeing “a man who’s always at the coffee shop, who everybody knows.” As Lewis walked in, the man said, “whenever I see those signs it just calms me right down.”

One of Smith’s proposals is to eliminate registration fees for recreational activities, so that all young people in the community can participate.

“Even as a youth I focused on youth, because we need that encouragement. When you start encouraging people to be involved that’s when you build that (sense of), ‘oh, maybe I really do matter.”

The focus on youth stems not just from Smith’s experience with teenagers and children in the area, but also from a desire to help the community where he is raising his young daughter.

He wants the community to be “safe, where she can walk or bike to school without the fear of cars speeding down the street … I want her to feel welcomed in her city, so that she can flourish.”