Lil MacPherson excuses herself to answer her phone. Though it’s mid-interview, her campaign manager is on the line. There is silence, then, “Oh shoot.” “Did you know about the bomb threats?”

MacPherson, the only challenger to the incumbent mayor Mike Savage, is getting a taste of the situation room.

The setting is a corner table of her Downtown Halifax restaurant, The Wooden Monkey. She tells her campaign manager, Lia Renaud, that they’ll think about their response before issuing a statement.

“That’s crazy.” MacPherson hangs up. “It’s a disruption,” she says of the bomb threats. “People are going after the disruption.”

Faced with this news, MacPherson is calm and thoughtful, and more subdued than she is when discussing her platform. There are many questions about her – an untested politician known locally for her environmentally conscious restaurants as much as her public statements on the effects of the Nova Centre’s construction on small businesses.

MacPherson has offered insight into how she can keep calm in a high stakes emergency, but the more compelling question is if she can ascend to the office of mayor with a platform that focuses on green ideas and a message that eschews traditional politicking to focus on ideology.

The number one priority on MacPherson’s electoral platform is the environment. Many of her ideas, in one way or another, intersect with affecting climate change or “greening” the city in some way.

MacPherson says that at conferences she’s attended, municipalities are being challenged to take on a leadership role in fighting climate change. She wants Halifax to take up the challenge and sees economic benefits in the process. But thinks “We’re not ready to accept this innovation.”

MacPherson points out that innovations made to fight climate change centers on creating a variety of efficiencies. This includes financial benefits and creating green jobs.

MacPherson is surprised at the suggestion that climate change and green issues might be a minimal part of the mayor’s remit.

“I completely disagree,” she says, her voice rising. “I’m actually quite shocked that a young person like you would say that.” 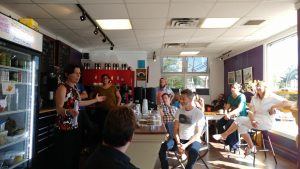 Courtesy of campaign for Lil MacPherson.

A lot of the young people MacPherson speaks with, she says, are green-minded and she believes there is a disconnect between them and City Hall.

“I really want to champion the youth because you guys are my future,” she says.

To spur affordable housing, MacPherson wants to make it easier to allow single-family homes to add rental apartments. For food security, she suggests increasing urban gardening in Halifax and offers that groups of people – farmers, refugees, and students – could grow whatever they want on municipal plots and even sell their crops.

MacPherson paints her visions for the city in broad strokes, which at times omit finer details. “Our bylaws are archaic and not working,” she says, though when asked which ones, the response was simple. “All of them.”

“Young people are talking about jobs and environment,” MacPherson says of those she speaks to. She says people thirty and over talk mostly about development.

“Everyone’s terrified that we’ve lost control of our city,” she says.

Small business is important to MacPherson. “We are the engine that makes the city run,” she says.

Though she has won acclaim for her restaurants, she has also been frustrated with the city. She says one of her first acts as mayor would be to create a small business committee and to appoint an ombudsman specifically to help entrepreneurs have easier experiences applying for permits and interacting with the city.

MacPherson’s vision of a utopian Halifax is a green one and her platform presents a city that many residents would be happy to live in. It’s not without precedent that a mayor has been elected with a green vision for their city. In Vancouver, Gregor Robertson, an organic juice entrepreneur and green advocate, has been mayor since 2008.

MacPherson’s campaign reflects how she lives her life and runs her business. “I’ve got proof right here that we can actually do business – be healthy, be well – and we don’t have to destroy things along the way.”

MacPherson’s business approach has been “planet, people, profit,” but whether it can work as the cornerstone to a successful mayoral campaign remains to be seen until the polls close on October 15.

“If people think that’s too green, then don’t vote for me.”