The walls of Mike Savage’s Dartmouth campaign office are covered with t-shirts reading “I Like Mike.”

Tweens, senior citizens, political veterans, optimistic newcomers, and even a little dog fill the small office with banter, laughs and the smell of the coffee. Everyone is coming together for the purpose of getting Savage reelected as Mayor of Halifax on Oct. 15.

Not everything will be the same this time around, as Savage stated that there are some big differences this election. “I didn’t realize how much you continue to be Mayor, while you’re campaigning.”

Savage balances the responsibilities of council, committees, and other mayoral duties while also campaigning across the municipality.

“The city has changed a lot in four years. Economically, we’re stronger. Environmentally, we’re greener. We’re much more diverse than we were four years ago,” said Savage.

In the last four years, Savage is especially proud of his achievements in business, immigration, and also in how council conducts itself.

“We’ve welcomed a thousand Syrians, but we’ve also had other immigration to the city, which is great.”

“We’re not just sitting back and waiting for issues to come to us, we’re being proactive on issues like housing, and immigration, which the city has never done before,” Savage said.

Savage believes Halifax is headed in the right direction in terms of business, but has a plan on how the city could do better in cutting red tape.

“Our plan is to have an ‘open for business’ attitude, particularly (for) new businesses. We need a more aggressive small business team to help with red tape to streamline all of our processes on things like development.”

Savage hopes to use his political experience to balance short-term plans with ones that he hopes to have completed in four years time.

A member of parliament for seven years, and the Mayor of Halifax for four, one of Savage’s priorities during his time in the House of Commons was education. 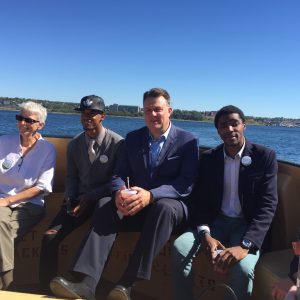 Courtesy of campaign for Mike Savage.

“I’ve spent a lot of time with student unions across the country,  meeting students campaigning for things like forgivable loans, students grants for low-income Canadians, and for Canadians with disabilities; so I’ve always been attuned to the issues in the student realm.”

This experience helped Savage understand what affects students in Halifax, and makes him proud of the city’s initiatives such as the “Bridging the Gap” program, which hires recent grads to municipal jobs to gain work experience, and the International Students Welcome Reception at City Hall.

Savage identified the main student issues in Halifax as “affordable housing, transit, forms of transportations like bike lanes, and issues that touch on human rights; LGBTQ+ issues as a city I think we have been strong on, we have one of the best Pride festivals, we put in Pride crosswalks to get people’s attention, but we still have more to do.”

Savage also recognized that the nature of crime in the city is changing: “with social media, there’s too much violence against women and girls. I think that’s an issue that has an impact on campuses.”

This project is one that he wants to see completed in the next four years. “It’s going to take a lot of cooperation, and it’s not something the city has really been involved in before, but I think that’s one thing I would want to see completed.”

Savage has a plan for Halifax, and he wants students to be a part of it.

“I’m really excited that we’re starting to see a turn in demographics and for the first time, last year, we actually had growth in the 25-39 age group, which was 2600 people came to Halifax and chose not to leave, which hasn’t been the norm’.”

When asked if there was one message that he could share with students, Savage said: “There’s a place here for you. We’re becoming a different city. A more diverse city, a more cultural city, a prosperous city, and a place where there’s room for everybody.”