Every other Friday night, Dominick Desjardins plays Bingo at the Joseph Howe Manor. At 24 years old, Desjardins is younger than many of his Bingo companions by at least 50 years.

No matter if he wins or loses the election for District 7- Halifax South Downtown- Desjardins plans to continue his Friday night Bingo ritual.

Desjardins is a graduate of Saint Mary’s University and works as a theatre manager at Cineplex. His race for District 7 is a contested one, against incumbent councillor Waye Mason and former councillor Sue Uteck, who held the seat from 2000 until 2012.

While his two opponents have more age and experience, Desjardins is resourceful about gathering input from people all over the district. Friday night Bingo at the Joseph Howe manor is not just about some healthy competition, but about gaining insight from a demographic far different to his own.

“They’ll ask you what your platform is, and you’ll say it, and they’ll say ‘30 years ago (the city) did that, and this is why it didn’t work.’ It puts what I’m saying in perspective,” said Desjardins. 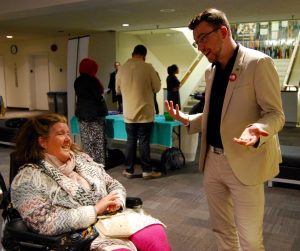 After nearly 10 months of campaigning, Desjardins has knocked on over 9,000 doors and worn down three pairs of shoes. The first months of his campaign were focused on research, and on getting to know the people in the district.

“We’d go to Tim Hortons, we’d go to the busiest area, and ask people what challenges they face, and ask how they think we can get out of that. We did the same with street corners. We also went to manors, schools and universities and held info sessions to get all of this feedback,” he said.

From all of these interactions, Desjardins identified several key issues:

– Keeping graduates in the city

“(Desjardins) is knowledgeable. He’s a go-getter. He would do the city the big change that it requires,” he says.

Desjardins’ knowledge of politics was obvious during his time at university, where he helped revive the Saint Mary’s University Young Liberal Society after years of inactivity, and served as society president.

Pat Burton, current president of the SMU Young Liberals, worked with Desjardins to bring back the society, and has known the candidate for four years. “Dominick will act on what he says if he makes it on the city council. If, and hopefully when, he gets that job change is going to happen,” says Burton.

Burton was not surprised when he learned about Desjardins’ candidacy. “I knew at some point, whether it’s municipal, provincial or federal, Dominick Desjardins’ name would be on a ballot.”

While policies focused on change and community outreach have formed the foundation of Desjardins’ campaign, the candidate faces two significant hurdles: he is relatively unknown, and he is young.

Desjardins doesn’t seem worried. “I think my opponents really underestimate the young guy, but lawn signs don’t vote. What we’re hearing at the door is absolutely amazing, from their own neighbourhoods. I’m just going to let them keep underestimating,” he says.