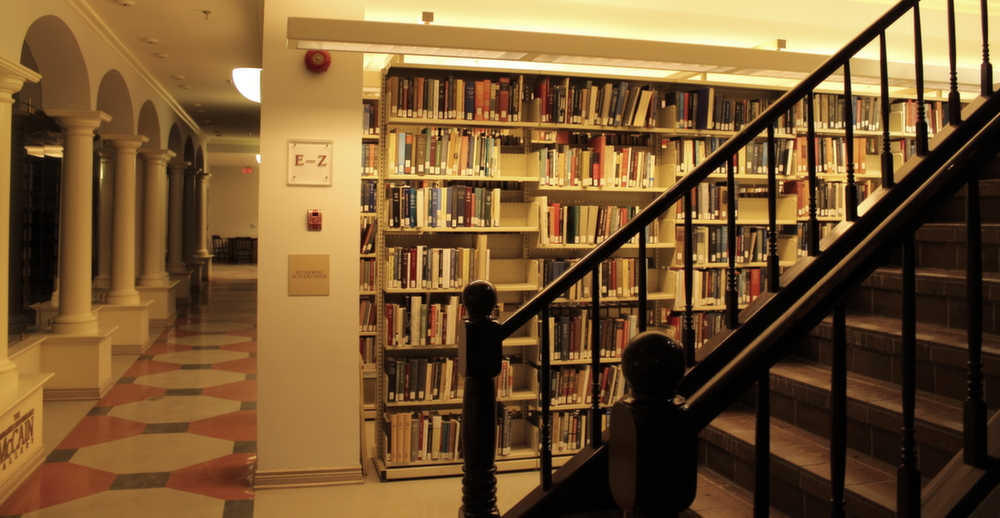 The perfect place for introverts to be alone, together. (Photo by Josh Fraser)

I feel as though I am divulging secrets, letting a curious cat out of the bag when I talk about my favourite spot on campus. As a King’s student, I have a predictable bias for our own dot on the map, but there is a lot that contributes to my love of the King’s library.

The King’s Quad is a perfect picture of the season as you walk up and crack the seal on the library door. No worries, there’s still a set of glass doors between you and the near-silence inside. The hums and quiet shuffling dampen the distant ruffling of pages, the smothered echo of the room. The Alumni Reading Room crackles with anticipation of the next thought, the next page. Somehow the room itself is the eye of the storm as the worlds caught between the pages are stirred by human hands.

To some, the strict stillness can feel oppressive, and I don’t blame them. It is quite a thing to shatter the silence with a hacking cough or machine gun keystrokes, and waiting for someone else to do it is that much worse the longer the silence lasts. Some people hate libraries, and that’s totally fine. Like anything, one has to practise enjoying the space.

In essence, a library is where introverts go to hang out alone, together. Speaking as an extreme introvert, a roomful of quiet strangers who tacitly agree to minimal noise is all the more impressive and welcoming for succeeding at it. Not only is it a space to concentrate on tasks of the mind, a library is designed to encourage imagination and intuition. The urban world is ridiculously noisy, and there is something meaningful about sonic space and the ability to hear your own thoughts clearly, especially for people who say nearly everything internally before saying it aloud or writing it down.

The intimacy is part of what makes me prize the King’s library, over the Killam Library for instance, but again it may be an emotional association to King’s. I will say the busts, museum displays and dark wood give the King’s library an enlightened feel, one of exploration. Far from being stuffy, the shelving is designed around the workspaces that dominate the Alumni Reading Room, creating an emphasis of doing while reading.

I never need a reason to hang out alone in public, and I hope libraries as we know them continue to exist as a coffeehouse without the chatter, a bookstore without expense, a haven for introverts and those who need to hear themselves think.