Clinton vs. Trump: two American stereotypes against each other

Will the madness ever end?

As Canadians, we love to state all the differences that separate us from the United States. We claim that we are more tolerant, more compassionate, and overall, friendlier people.

If Canadians had to choose an American to use as a perfect example to show that we are all of these things and much more than Americans, we would choose Donald Trump. 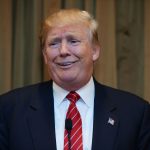 But, as Canadians, we also spent a lot of time growing up watching movies that brought to life the “American dream,” We saw it in the Italian Stallion, Rocky Balboa; we saw it in Jay Gatsby, the doomed millionaire tycoon; we even saw a little bit of that idea in Forrest Gump.

The idea that you can be anyone, from any background, and make it big with hard work and determination.

The American dream is one that does not account for the societal barriers that people of colour and many other marginalized groups face, so often it those who are well postured and “on a track” for the dream who get it. 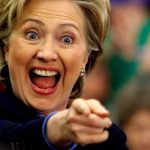 This is what Hillary Clinton represents.

Trump is brash, rude, and compulsive. He’s racist, homophobic, xenophobic, self-absorbed, and ignorant. He’s bankrupt and corrupt. He’s uneducated, poor mannered, and would be the American stereotype joke of kissing-cousins if it wasn’t that instead he’s trying to inappropriately kiss his daughters. He is the epitome of what Canadians say they are the anti- of.

Clinton is postured, rich, ivy league educated, she has the beautiful family with the beautiful home, she is well-traveled, she wears expensive clothing labels, she probably solely drinks Starbucks and mimosas; she is the epitome of what Canadians think of when they think of the vision of the luxurious “American dream” lifestyle.

This is why they are so unbearable to watch, and exactly why they are both so hated by the two sides of America.

People want to like Clinton. She’s smart, qualified, and tested. She has a wealth of experience and has a calm demeanour and patient temperament, even when she has to debate a rabid orangutan.

But there is a lot of Americans who have a chip on their shoulder the size of Texas. They believe something has been taken from, and that something was often the promise of the American dream that they believed they were entitled to. Because Clinton represents what they don’t have, they sensationalize her shortcomings to compensate for their lack of evidence that she’s unqualified. 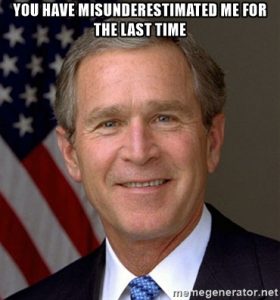 If you are someone who is claiming right now, “but the emails! Benghazi! But Wall Street!” You should know that the George W. Bush administration deleted 22 million emails compared to Hillary’s 30,000. You should know that under Bush’s leadership, there were 13 terrorist attacks on US embassies that killed 60 people. You should also know, that Hillary was not in office during her Wall Street speeches, but the Republican Party has accepted $7million from one executive on Wall Street alone, and all candidates also accepted donations.

One of the scariest criticisms that Clinton faces is the criticism she faces for previous values and ideas she had from her life in politics that started in the late 70s.

What is so scary about this for me is that I can see so much of my parents in her. I can remember challenging my parents on their ideas and shaming them to think more progressively. I have also been able to see them change and adapt with more contemporary ways of thinking.

As I grew older, I also became more aware that they challenged their own parents to change their ways as well. As such is the way of human progress.

I have no doubt that at one point in time, Hillary Clinton did not agree with same-sex marriage, and probably had a lot of ideas that were racist, xenophobic, and homophobic. I can also guarantee that your parent’s generation, and many other people who you deem to be morally righteous, probably had a lot of the same feelings because it was a reflection of the times they were living in. 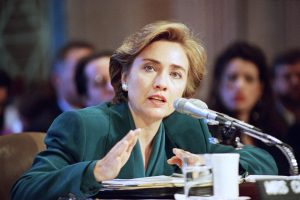 The difference between people who once thought this way and changed, is that they did indeed change. They recognized the error in their ways, and actively dismantled their own prejudices.

It must be a humbling feeling to come to realization that you are no longer “fighting the man”, but have become it. While Clinton may now be the powers she once sought to challenge, the other candidate has always been “the man.”

Donald Trump has found loopholes in every piece of legislation that aims to protect workers rights, and has also proudly stated that he doesn’t pay his taxes. He doesn’t share his wealth with charity, and it could be very true that Trump doesn’t even have any wealth to share. He claims that America’s men and women in uniform and veterans who suffer from PTSD are weak, but he was cowardly when drafted to go to Vietnam. 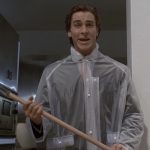 From the movie, “American Psycho”.

If you’re a Canadian watching this election, you probably have felt that you’re watching a horror movie, where you’re screaming at the TV for the person to not go into the basement with the monster, and they just keep taking one more step closer.

Trump is, in every sense of the word, a monster. He promises nothing but the oppression of the American people.

Hillary Clinton is not as progressive as Bernie Sanders, she represents the social liberals, yet fiscal conservatives of the Democrats. But is that really monster quality?

On Nov. 8, Americans will vote what stereotype they want the world to decide that they are. Are they the people who believe in the elitist American dream, where their President rubs elbows with Hollywood and is a celebrity their self from a political hierarchy family? Or are they the a-holes that the world will continue to make jokes out of.

It’s only the stability of the state resting on it.