From the Archives: A History of Hazing 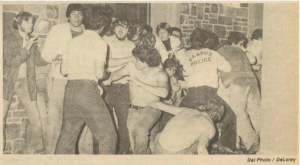 Hazing has been a topic of intense debate at Dalhousie for even longer than there has been a Gazette to report on it. What follows is a very small sampling of that history, a survey that stretches from an 1872 account of an ancient Freshman-hoisting contraption known as “The Box” to more modern reports of engineers’ raids of King’s.

All former students of Dalhousie will grieve to hear that “The Box” has been torn down. No more will the classic walls of Dalhousie re-echo shouts of “Put him up! Put him up!” or see luckless Freshmen determinedly opposing their rise in the world. It is a great loss to the students and can only be remedied by the Governors giving us a block and tackle, so that future delinquents may be hoisted up in place of being put up.

Hazing is an old and time honoured custom. Few seem to understand its true significance. It is supposed by some, to be a barbarous system by which the freshness is taken out of the Freshmen. This, however, is contrary to fact. The term Freshman was applied to the first year students many hundreds of years before the word fresh acquired its modern slang meaning, rude and untamed. The term Freshman does not imply that a man is impudent, self-conscious and bold, but on the contrary, that having newly come to college, he is meek, humble, and untried.

Hazing plays a prominent part in college life. ·It soon transforms a lot of disunited newcomers into a strong and efficient class. It forces the Freshmen to make the acquaintance of men of their classes. In a college like Dalhousie, where the students are widely separated, this is a very important feature. By giving the newcomers a common terror, Hazing spirit creates a strong class. This in turn is but the stepping stone to college spirit, and no one will say that this is not a feature of college life which is worthy of our highest and best efforts.

Hazing fulfills its purpose. It quickens class activities and develops college spirit. It brings the best men to the front, and makes the least feel like he has played a part in the work of his class, and thus indirectly in the life of the college at large. Hazing is supposed by some to be cruel, but this is not so in Dalhousie. Ask the Freshmen themselves, and cherish their answer. It is not silly childs’ play, but a very necessary part of college life. It needs no tender nurturing from the college as a whole, but it is in able hands if it is entrusted to the kind offices and sharp wits of the lordly Sophomores.

During the past few weeks, significant signs of this annual aberration known as hazing have been in evidence about the campus. This particular form of innocuous insanity is the ancient practice, visited upon each generation of freshmen like the sins of the fathers upon the children, and in common with many venerable customs, it possesses doubtful merit, and is exposed to considerable captious criticism.

To our mind the whole process of hazing is ineffectively arid and childishly absurd. It benefits no one, and only serves to make the university ridiculous in the eyes of the general public. The origin of the practice seems to have been the desire to impress on newcomers to college the fact that their position was now a humble one, and also to suppress any grandiose ideas which a freshman might have of his own importance. But in these days of the mass production of students, where two or three hundred are forced to don the regal regalia of initiation, the desired production of an inferiority complex fails to take place. The new- comers congregate in little groups wherever they go, and feel rather proud at the attention they attract. The rest of the college laughs at them the first day or so, and at the end of a week is sick and tired of seeing these modified scarecrows in their midst.

The effect of all this on the plebian populace is decidedly deleterious to the university’s reputation. Stolid citizenry, seeing crowds of students garbed in the ghastly garments of initiation, cynically conclude that the pursuit of learning has given place to the pursuit of sartorial sensation. And their judgement is not without foundation, for after all, university men and women should have outgrown such puerile pranks. They should be cultivating ideals and ambitions on a slightly higher plane. Without taking themselves too seriously, they should be taking life seriously, and attempting to lay some solid basis for character and intellect. Otherwise, their time, and their parents’ money is being utterly wasted. Instead of coming to a university, they had far better remain in the home town, join the local society of Bears, Elks or Lions, and parade about in gorgeous and silly costumes to their heart’s content.

The move came as a surprise to most sophomores, grown accustomed to non-enforcement of the order which banned wearing of placards “except those bearing the names and addresses of students for purposes of identification,” and “any actions that inflict personal indignity.” Implementation of the order was immediate. Pant legs were rolled down, placards disappeared from city streets, shoe polishing and push-ups became a feature of past initiations.

Earlier, Mr Muggah announced that the 1961 initiation “would not be ‘hazing’ in the normal sense. “Instead,” he said, our purpose is to make new students feel at home, meet people, and get an idea of college life. Nobody is to be forced to do anything they don’t care to.”

Frosh reaction to the ban was mixed. One Halifax freshette remarked: “I didn’t know just what to expect. . . .I really didn’t.”; while a freshie-soph from Lunenburg cooed, “A hell of a good time.” A freshman from Dartmouth said he expected it to be a lot of fun – “I liked to wear the beanie and cards: I couldn’t see why it had to stop.” However, one Halifax freshman felt the whole thing was “a childish waste of time.”

Initiation or hazing of freshmen has been a long standing tradition of the engineering society at Dalhousie. This year was to be no exception to the rule. On Wednesday, September 19, as had been the case in other years, the engineer freshmen were taken to a party on their behalf. The party was to include being covered in everything from sour milk to special sauce and of course ample quantities of beer.

The second part of this traditional “Feast of Engineers” is a “spontaneous” raid on the University of King’s College women’s residence. In past years this raid has included such antics as scaling drain pipes, to trying to muscle past a raft of campus police. The campus police are employed especially for the event and usually have a two or three day notice of their arrival. The engineering society makes no secret of their intentions to continue their hallowed tradition.

This year, as was the custom, the college again prepared for the raid, unknowing that this year would be something quite different. This year there would be eggs thrown, windows broken, campus police beaten up, and engineers hit with flashlights. In the opinion of many, it would be the most violent outburst seen on the campus.

Keith Wellband, President of the Dalhousie Engineering Society, said that the raid on Alexandra Hall was a tradition and, to his knowledge, one the Engineers were going to continue. He went on to say there were eggs thrown, windows were broken and campus police were beaten up. He also pointed out that the raid was spontaneous and was not an official function of the Engineering Society. He said that from the reports that he had received the raid was something that the campus police were “up for”.

Wellband concluded that “for the damages that did occur, on behalf of the engineers, I apologize.”

The actual raid as described by various members of the King’s community was “more violent than usual but still a success in terms of school spirit for both the engineers and the college.” One campus police officer, Jeff Morris, a second year science student, said that there were some students there who were too drunk to participate. “One of them asked me if I was a C.P. and when I replied yes he asked me to take him home. We just put him off to the side to watch. I felt more sorry for him than anything.”