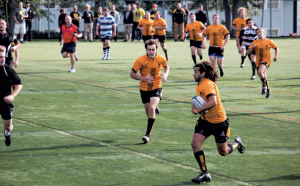 With each incidence of hazing, the public becomes less sympathetic for those who engage in what is, in no uncertain terms, bullying.

That is illustrated perhaps no more clearly than at Dalhousie.

Less than two years ago, the university’s women’s hockey team ignited a media circus when all 19 non-rookies were benched for their role in an alcohol-fuelled rookie party. The team could have quietly accepted their punishment, but they did not. They fought back. They unsuccessfully appealed their ban, arguing they were being ‘bullied’ by university administration.

The story became a week-long nightmare that made nobody look good.

Let’s fast-forward to this fall.

Somehow, we have another hazing incident, so soon after January 2013 marked the end of the season for Dal’s women’s hockey team. This time it involved two Dalhousie men’s rugby teams.

Somehow, this alleged hazing occurs only months after the university senate passed a new hazing policy.

Somehow, this bullying happens after the university met with executives from each sports club, including rugby, this spring to explain the school’s sports club handbook, which includes clear mention that all club members will be held accountable for their actions, on and off the field.

All signs pointed to the fallout from this suspension being more severe than what women’s hockey faced. The rugby teams should have known better, especially after witnessing such an ugly on-campus spectacle less than two years ago.

But instead, the two rugby squads accepted their penalty, and we have moved on. No public melodrama, dramatic written letter or breathless media reports.

Another hazing episode, so soon after the last one, is a wound on the university’s reputation. But, unlike the women’s hockey suspension, this ban wasn’t allowed to fester because of outspoken rugby players arguing for leniency and forgiveness.

Even if the rugby teams would have publicly disputed their punishments, the arguments they made would not have had the same traction as women’s hockey previously enjoyed.

Our society understands the perils of bullying better today than ever. It’s why we no longer excuse hazing because the teams of our parents or coaches did it. We now know—and this consensus is growing by the month—that hazing is wrong.

Say what you will about our society becoming more sensitive, pampered or whatever, hazing needs to be eradicated. An 18-year-old entering university, trying to fit in, is susceptible to peer pressure. Some do not have the maturity to stand up for themselves or handle the disdain, mild or not, of the older teammates they look up to.

No matter how severe the alleged hazing was, it’s clear that Dalhousie’s rugby club failed themselves, their university and their fellow classmates. They do not deserve to finish their season.

By shutting up and accepting their punishment, we know the teams have at least learned one thing.

Ian Froese was the Dalhousie Gazette’s editor-in-chief in 2013- 14 and sports editor the two previous years.