Log-in to your legislature

Following politics is easier (and less sketchy) than Facebook creeping. 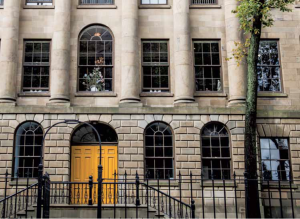 Now you can follow Province House debates WITHOUT pants! (Photo by Amin Helal)

Some people come to Nova Scotia for school and immediately feel at home here. Other people never fully feel welcomed by the community. According to the law, as long as you’re a Canadian citizen, and you’ve been studying here for six months, and plan to stay, this place is now considered your home. If that applies to you, the Nova Scotia government is now your government. Actually, it’s our government. You, me and everybody else who lives here. Welcome. Of course, you can keep telling people your permanent address is your parent’s house in Kapuskasing, Ont., so they get all your bills, but your citizenship follows you.

As shared-owners of this province, we’re all stewards for this place. The paths that lead us here are different, but as Nova Scotians we share a common future. Much, although not all, of our future success depends on who’s leading us and how we are governed.

There are plenty of ways to find out what is happening in the Government of Nova Scotia, but if you’ve never followed government before, chances are you’ll be overwhelmed by the information you’ll find. Most of us will never be close enough to the centre of political action to know where to look or what to ask for.

Our new website, Open- HouseNS.ca, broadens access to information about how decisions are made in the Nova Scotia House of Assembly – the place political scientists Jennifer Smith and Lori Turnbull call the “elected cockpit of political life in the province.”

There has long been a record of what happens in the House of Assembly called the Hansard. The Hansard is a word-for-word record of every conversation that happens on the floor of the legislature. The information is nothing new—all OpenHouseNS.ca does is organize it.

The volume of content produced in a typical sitting of the legislature ranges from one-to-two times the total word-count of all seven Harry Potter books. The Hansard isn’t an easily searchable database and is organized chronologically, so you need to know what you’re looking for, or be prepared for a long read. Unsurprisingly, most of the proceedings of the legislature are in no way as captivating as Rowling’s novels.

However, every now and then the legislature deals with something that really matters. We wanted to build a site that matches how people consume content online, so you can know when those important things are happening.

The site takes the work of the Hansard publication and uses the magic of the internet to turn it into a traceable stream of updates about what each MLA is saying in Province House. In order to follow along, all you need to know is your address, and the site points you to your MLA.

The site introduces a powerful new search function that gives people the ability to monitor how the issues they care about are being discussed in the legislature. It makes sharing and linking to content easier, so Nova Scotians can communicate with their social networks about what’s happening in the legislature. It is a versatile platform that we imagine will be a resource for Nova Scotians to learn about our politics and will inform how people and groups engage with the provincial government. We hope it will be a tool that people who are new to Nova Scotia can use to quickly get up to speed on issues they care about, so that they feel informed enough to engage with our provincial politicians.

Our ability to live up to our full potential as Nova Scotians has much to do with being able to make collective decisions through the democratic processes that govern our political institutions. Doing that effectively means paying attention. Paying attention just got a whole lot easier.

Mark Coffin is the Founder and President of the Springtide Collective, a public interest group working to bridge the gap between Nova Scotians and our democratic institutions. He is a graduate of the Environmental Science program at Dalhousie University. He can be reached @MarkCoffin on Twitter or via email Mark@SpringtideCollective. ca