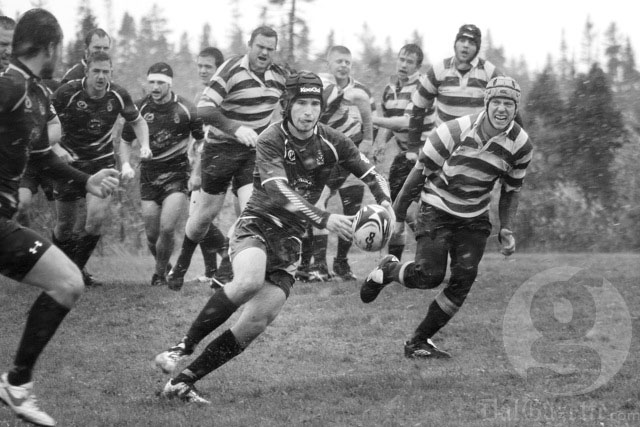 This past weekend Dalhousie’s Division I rugby team added 2011 to their growing list of consecutive undefeated seasons.

In a torrential downpour and icy temperatures which still brought an impressive 100 hearty souls to Wickwire Field, the Tigers claimed their fifth straight Nova Scotia University Rugby championship Oct. 30 after thrashing St. FX 46 – 0 in the final.

The score was 15 – 0 entering halftime, but as the rain let up the Tigers picked it up another notch, solidifying their victory by outscoring their opponents 31 – 0 in the final 40 minutes.

Dal travels to Fredericton this weekend hoping to avenge their defeat to UNB last fall and reclaim the Maritime Championship. If Dal comes out on top, the team heads to Montreal to play McGill for the Eastern Canadian Championship on Nov. 12.

Meanwhile, in Division II action the same afternoon, the King’s and St. FX championship was cut short 20 minutes at Rockingstone Heights Field because of the poor conditions. The abbreviated contest was not enough time for King’s to surmount an early collapse, falling 17-10.

Down by a dozen points after the half, Will Robinson scored two tries for King’s to close St. FX’s lead to 12 – 10. Darren Macdonald would seal the Blue Devils’ hopes with five minutes remaining, pushing through to score a try and take the title for his side.

After both games, the combatants retreated to warmer confines as soon as the handshakes were over. Not even the thrill of victory could propel Dal or St. FX to remain on the field for longer than needed in weather that was horrendous at best.