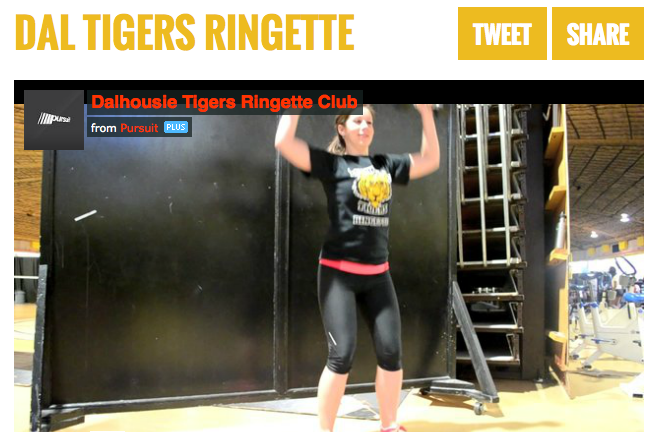 Funding is minimal for club sports at Dalhousie. It is simply a part of the reality of competing on a non-varsity team.

This reality is compounded by the fact that, unlike other clubs, the Dalhousie Ringette Club does not have a local league to play in. The club schedules games between local U16 and U19 teams in order to have a semblance of a “regular season.”

Their only major competition during the year is the Challenge Cup, an annual holiday tournament that takes place in North Bay, Ont. To cover the expenses for the trip, forward Laura Dalman and the rest of the club chose to go viral.

“We decided to use Pursu.it as a fundraising idea after we approached the Dal Alumni for funds and there was no real money for club teams,” says Dalman, a third-year Marine Biology student. “[Teammate] Mary Mitchell and I were the first to jump on board with the idea and the rest of the girls followed.”

The club is using Pursu.it to raise $5,000 dollars towards this year’s tournament. Pursu.it is an online platform similar to the more-renowned Kickstarter, but devoted to Canadian athletes. The website displays information about the athletes and their goals, and tracks fundraising throughout their campaign.

The innovative campaign allows the club to raise funds even with many members returning home across the country for the offseason.

“This allows us to reach out to our home associations, family and friends in excess of just reaching out to the communities around Halifax,” says Dalman.

One of the unique aspects of the Pursu.it platform is the concept of “givebacks,” where sponsors receive tokens of appreciation from the club to thank them for their donation. The givebacks vary depending on the size of the donation, with those donating $250 and over earning the opportunity for three Tigers players to be coaches for a day at the sponsor’s club.

Growing ringette locally in Halifax is an essential part of the club’s ethos.

“I think it is extremely important to give back to your local community,” says Dalman. “These younger girls will eventually be in the position where I am now and hopefully will have the same chance at playing at a university level.”

One of the caveats of using Pursu.it is if the club does not reach its goal at the end of the campaign, they do not receive any of the pledged donations. As of the completion of this article, the team has raised $850 with 30 days left.

While they want to improve on last year’s fifth-place finish, establishing ringette for future players is important to the club.

“We hope to keep the ringette community growing if we can show girls how far we’ve come and teach them the skills we’ve gained, and they can be just as successful,” says Dalman.