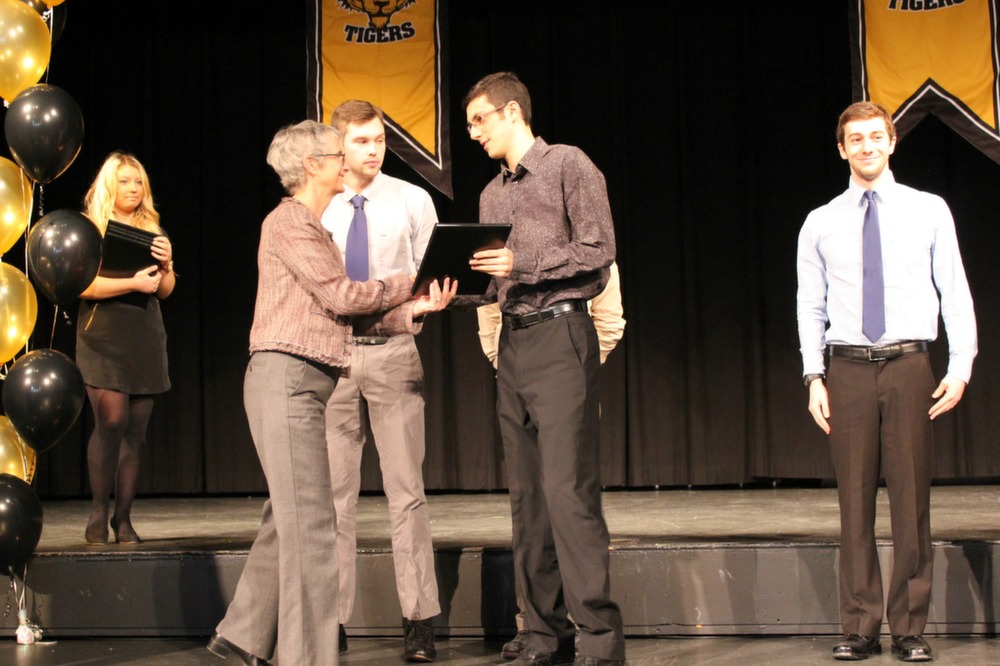 Parents, coaches and academic mentors were in attendance to celebrate the athletes’ successes on and off the field. To qualify as an Academic All-Canadian, athletes must be full-time students who maintain a 3.43 grade point average and compete on a Dalhousie varsity team.

Director of varsity athletics Karen Moore opened the ceremony by thanking Terry Worthen, a graduate of Dal’s dental school, for sponsoring the event. Moore says Worthen’s donation was a key component in the banquet taking place.

“We’ve been facing budget challenges for the last three or four years,” says Moore. “This event is not core to the activities of the varsity programs, but it is so important to us.”

Moore says they made it a priority to ensure the banquet stays alive because of its importance to the athletes.

“It bridges that academic and athletic gap where we want as many faculty and staff to come and understand their huge commitment and accomplishments.”

Eric Villeneuve, the 14-time master of ceremonies for the luncheon and former Dal volleyball player, agrees.

“For the amount of time and commitment that these students put in academically and athletically—especially academically—I think it’s a really worthwhile thing and it would have been a shame to see it disappear,” says Villeneuve.

Notable recipients of the award include Holly Van Gestel, Rebecca Haworth and Robert McCulloch, who all joined the exclusive class of five-time Academic All-Canadians.

Out of 240 varsity athletes, 100 were given All-Canadian honors for the 2012-13 academic year, which is a higher percentage than ever before. Moore says this alone is a huge accomplishment.

“I would think that [the percentage of All-Canadian athletes at Dal] would be one of the highest across the country,” says Moore.

She also says this event has had an impact on the rising number of Academic All-Canadian athletes at the university.

Ben MacAskill, who spoke on behalf of all athletes at the banquet, says there have always been initiatives implemented by the university to ensure student-athletes are able to balance their academics and athletics, including study hall for first-year athletes, tutoring services, and putting a focus on having upper-year athletes providing support for new varsity athletes.

“They definitely push for athletes to do well in school,” says MacAskill. “You can definitely see it since the numbers are increasing.”