“We will not give up the fight, education is a right” was the chant echoed across the Dalhousie Studley quad on Tuesday. Approximately 40 Dalhousie students gathered in front of the Henry Hicks building to attend a public meeting held by the Board of Governors, but were turned away at the door.

The students, after being turned away, started to chant in protest so that their voices did not fall flat to the board. Dalhousie security allowed eight students to attend the meeting after the protests started, and then six more were allowed entry after the protest gained more momentum.

Students that were left in the cold to have their message heard were not shaken by the exclusion to attend, as they continued to chant, shake signs and pass around candy to support their fellow students in the cause for reducing tuition fees.

George Shannon, a second-year engineering student, attended the protest. His program will be seeing some of the largest tuition hikes.

“I think we pay a lot of fees already. The services for engineers aren’t very good,” says Shannon. “We have a lot of our lectures in a movie theatre, our facilities haven’t been updated, there’s a new building that has been on the table for about 25 years that has just never come to fruition, and a lot of what we’re going to be paying isn’t going to go to our discipline or degree.” 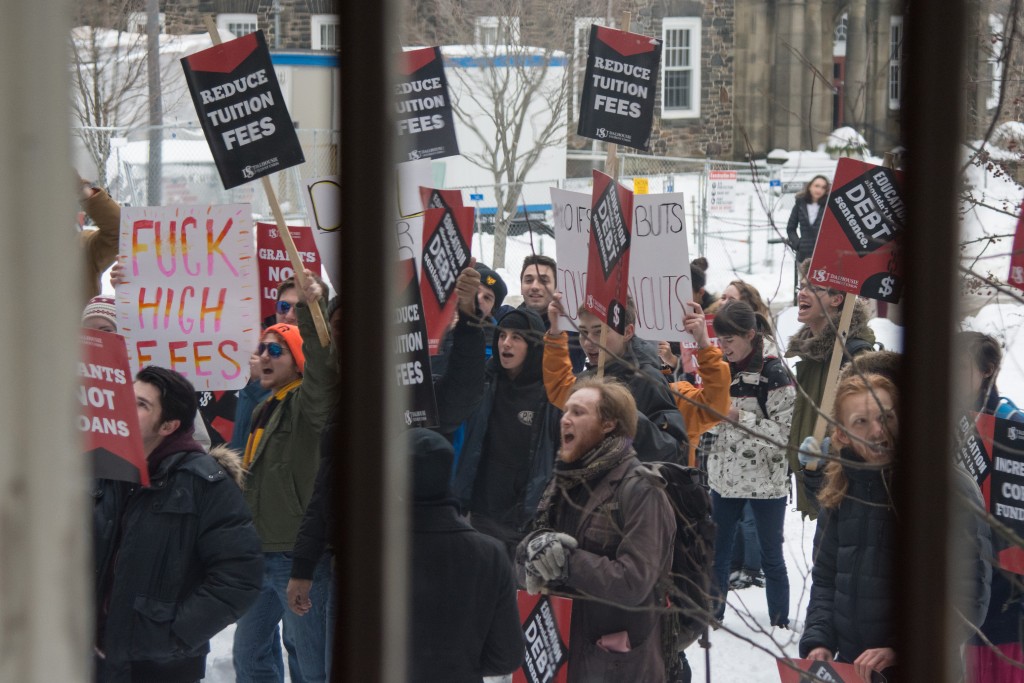 The purposed tuition hike comes from the Dalhousie University budget committee, which recommended an increase of 18.9 per cent for agriculture, and 15 per cent for engineering and pharmacy. The Board of Governors of Dalhousie is the governing body that will vote on whether or not to approve these increases on Apr. 19.

“I just feel there’s a lot of shadiness of what’s going on and why they’re raising the fees,” says Rayne Schwinghammer, also a second-year engineering student at Dal.

“It’s hard to believe that the people up top are encouraging students to come to Dalhousie when they’re raising fees and making it less accessible to everyone.”

For some students, this may mean that they can no longer continue their education at Dalhousie, and will have to seek more affordable post-secondary education.

Gillian Stanton is in her first-year of engineering, and says she may have to leave due to the high cost of tuition.

“I don’t know if I can continue to go to Dalhousie, I may have to go to a different school or I’m obligated to do a co-op,” says Stanton.

“It’s kind of depressing, because it’s already so high compared to places like Newfoundland, so compared to Nova Scotia where it’s more than $20,000 for school for Nova Scotian students, it’s quite depressing to realize this sad truth.”

The proposed tuition hikes have yet to take effect, and the students most affected by these increases are making sure that their voices will be heard. One of the key themes among students at the protest was that they are questioning whether or not Dalhousie University is the right institution for them.

Shannon, who has already studied at Dal for the past two years, says, “I think this will definitely affect my experience here at Dalhousie. I don’t take as much pride in my education because I don’t feel supported by the people who are running this school.”