By Marie and Zoe, Film critics 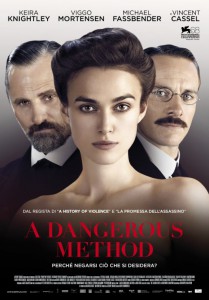 ZOE:   The David Cronenberg/Viggo Mortensen collaboration party continues in A Dangerous Method (2011), a departure from the gory A History of Violence (2005) and Eastern Promises (2007).  Method dives into the conflicts and heady discoveries of psychoanalysis as it emerged in early 20th century Vienna and Zurich. Theoretically, the  talent and subject matter promise an energetic, scathing take on human fallibility contorting  ‘progress’  – you know, like The Fly, but  with less regurgitation and more corsets. In practice,Method is introspective and straight-laced, saved only by the performances of the excellent ensemble cast. Michael Fassbender’s Carl Jung prickles with contradiction and Viggo Mortensen brings levity to the film with his affable and authoritative Sigmund Freud.

MARIE: Vincent Cassel is also intriguing as the provocative, sex-obsessed Austrian psychoanalyst Otto Gross. Gross is sleazy, but clever; he verbally challenges Jung’s self-restraint in every scene he’s in.

ZOE:  The characterization was spot on, but the actors seemed short-changed by clunky dialogue and a meandering plot.

M: The film features many scenes where Freud and Jung are discussing theories and debating theoretical ideas. Freud is forever portrayed with a cigar between his lips—I’ll leave it up to you to decide whether or not Cronenberg is deliberately toying with allusions to oral fixations and phallic imagery. As a psych student, I admired screenwriter Christopher Hampton’s dedication to the little but oh-so-significant details that shaped psychoanalysis and psychology as we know it today, but I was stilldistracted by some of the info-dump that was slipped into the script.

Z: The script was adapted from a stage play, which explains the ‘talky’ nature of the plot, but movies are the ultimate ‘show, don’t tell medium’ and seeing the plot, rather than hearing about it, would have livened up this tale. The theatricality was only effective in the initial scenes between Fassbender and Keira Knightley (as protégé Sabine Spielrien), who smolder with repressed energy.  The combination of top-button-buttoned rigidity with taboo conversation was oddly titillating, while the caning scenes just read as campy and routine.

Z: In spite of these issues, A Dangerous Method is worth checking out, if only to catch sight of some tight performances and gorgeous visual framing (watch out for idiosyncratic  details, like the way Jung’s moustache is  echoed by the chains on his waistcoat).Those who have an interest in the frontier days of psychoanalysis or steamy period dramas might enjoy Method, but other historical films are capable of enthralling, rather than informing, a more universal audience.