Arts have a new home at Dal 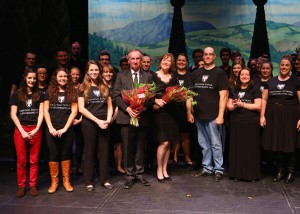 In May 2013, Dalhousie received a $10 million donation from the family of university chancellor Fred Fountain, making the new school possible.

Canada’s largest performing arts school east of Montreal will be housed in the Dal Arts Centre along with the Rebecca Cohn Auditorium and the Dal Art Gallery.

The funding will help restore parts of the Dal Arts Centre, which has existed on the Studley Campus since 1971. There are two main performance spaces in the complex, the Sir James Dunn Theatre and the David Mack Murray Studio.

Dominic LeBlanc, a second-year theatre student at Dal, is spending a lot of time at the Fountain School.

“I think it’s important to keep funding the arts,” says LeBlanc, “and the Dal community is very supportive of it.”

Jure Gantar is the interim director of the Fountain School. A scholar of drama and comedy, Gantar has taught at Dal since 1992.

The school’s faculty conducts research in historical contexts, theory and composition. Part of the funding will go towards this work.

The funding from the school is also expected to aid new mentoring and outreach initiatives.

“I want to keep doing what I love and the Fountain School is giving me those opportunities,” says LeBlanc. “I can learn from the experience my professors and classmates have.”

The Fountain School of Performing Arts has several scholarships available for students, including the new Fountain Graduate Fellowships.

Its schedule runs from September to April each year, and performances are open to everyone.