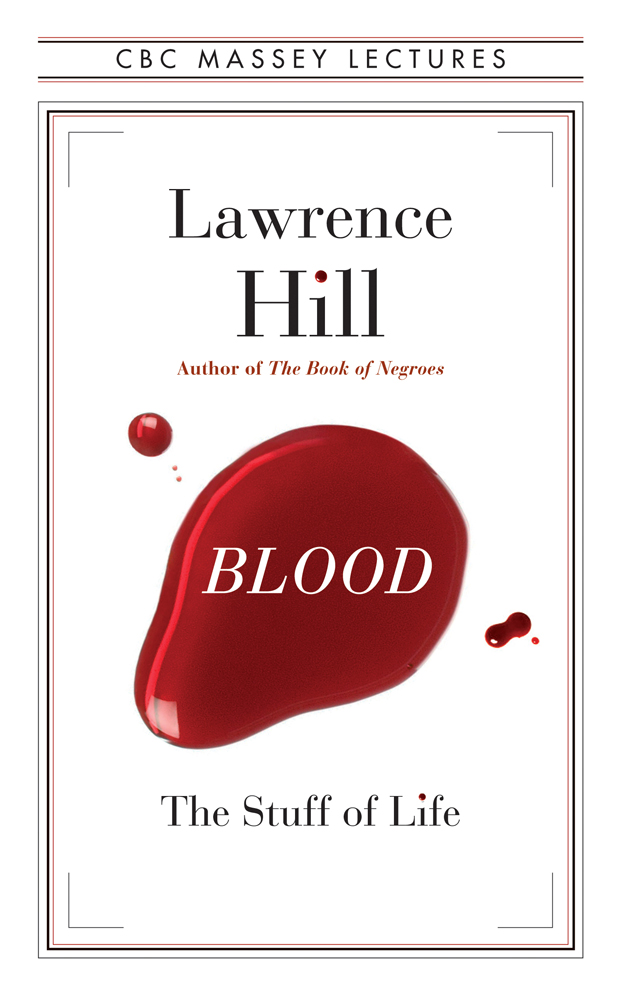 Are you terrified of needles? Do you become nauseous at the sight of blood? Cringe at descriptions of bodily injuries? Then this year’s CBC Massey Lecture isn’t for you. If you can stomach it, Lawrence Hill’s Blood is an intriguing survey of the ways in which that infamous bodily fluid underpins every aspect of human life, both physically and metaphorically.

Hill suggests there are two sides to blood. On one hand, the notion of blood is a means of demonstrating human interconnectedness. On the other, blood can be used for more nefarious purposes, harnessed to the attempt to justify discrimination and the creation of Others.

Blood, both metaphorical and actual, reveals the ways in which human beings are connected. Obviously, family has a role to play in this: a person’s blood relatives represent some of their strongest ties on earth (with exceptions, of course). We are also related to each other through blood in a literal manner: blood banks, set up in response to massive WWI casualties, continue to be a common means for people to save another’s life by giving up some of their blood. Similarly, though less positively, mosquitos carry malaria from person to person, uniting in illness those who have the disease. Blood brothers. Menstrual synchronization. You get the idea.

On the flip side, Hill also shows us the ways humans use blood to drive us apart. For millennia humans have used notions of blood purity to create an Other against which society must be purged and defended. Cases of blood libel against Jewish people in the Middle Ages is one example of this; the Holocaust provides an equally disgusting contemporary example. In Canada, Hill points out, the idea that we can parse a person’s blood into measurable quantities still determines who gets Status as a First Nations person, and who does not (the recent Metis ruling showcases the arbitrariness of this debate). Hill argues that our society cannot accept that a person can be both black and white; you must be one or the other, and if you have any black ancestry then surely you are black. These examples, and others throughout the lecture, bring out humanity at its worst, just as blood banks throw light upon its best.

If Hill’s narrative falls down anywhere, it is perhaps because his survey becomes too broad—the lecture covers everything from murder trials to diabetes, menstruation to Harry Potter. He lost me at times, when the leap from one subject to the next was just a tad too far to make. Ironically, however, this broadness also underscores the point that Hill is trying to get at: that blood permeates every aspect of our lives. The point could have been made with fewer examples and a little more depth, but one can hardly fault a writer for driving home their point too successfully.

However, the book’s conversational tone makes it more engaging to listen to rather than read. Luckily, Hill will be in Halifax to present the second part of his lecture (“We Want it Safe and We Want it Clean: Blood, Truth and Honour”) at the Rebecca Cohn on Oct. 17. Hemophobes, stay at home. You can catch up on the Massey Lecture next yea