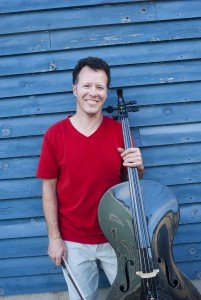 Norman Adams and his cello -- photo by Angela Gzowski

Outlandishly articulate and fiercely dedicated, Norm Adams is an arbiter of challenging ideas and unbridled sonic experiences. The artistic director for the boundary-pushing improvisation collective, suddenlyLISTEN, and the principle cellist for Symphony Nova Scotia, Adams is vehemently dedicated to discovering and showcasing the obscure, incendiary talents of Canadian improvisational artists.

Deeply mired in preparation for the 11th incarnation of his improvisational concert series, beginning September 15 at the Bus Stop Theatre, Adams is ecstatic about unleashing another year.

“It’s a series of concerts I started 11 years ago, dedicated to providing Canadian musicians, especially improvisational musicians, with the opportunity to play and share their music. Each year I kind of agonize over these brilliant artists who I love and respect, trying to unveil their brilliance and set up interesting collaborations,” says Adams.

Throwing open the floodgates for 2011 will be a gritty, thunderous wash of cold-blooded bayou beats and murky swamp blues, known, tongue in cheek, as Hoarse Rattle.

“I had these two artists in mind to work with,” says Adams, “Isaiah Ceccarelli, who’s this noisy, rattly, immense drummer and Arthur Bull, who’s this savage, dirty blues guitar player. It will be those two amazing artists, as well as myself on cello, playing a kind of improvisational, jaggedly rhythmic, haunted Louisiania blues thing.”

Lauding the talents of his cohorts, Adams is quick to praise both artists for their bold dynamics and ecclectic styles.

“Arthur is this immaculate blues guitar player who’s been deeply ensconced in the wilderness in Digby Neck for about three years. He does a lot with found objects, where he’s manipulating his sound with paper plates and tinfoil. He’s got this insane, murky, front-porch blues sound going on. Whereas Isaiah is playing just this one, huge drum. But he makes it sound as if he’s playing a thousand-piece percussion set. He’s extremely versatile—almost startlingly so.”

In addition to the concerts, Adams and suddenlyLISTEN also run artist workshops, starting September 19and occurring every other Monday night, where they engage and perform with the public to further showcase musicians and elaborate on the concept of improvisational playing.

“It’s a really great program,” beams Adams. “We’ve been running these workshops for about six years now and they’re always a huge success.”

As for the forthcoming concerts in the 2011/2012 calendar year, Adams is anxiously enthusiastic about an even denser collaborative idea the collective will be attempting.

“We wanted to do something crazy this year, kind of push the envelope further. In November we’re going to be putting on a show that’s a collaboration between improvisational musicians and the Irondale Ensemble, which is a Halifax based theatre group. We’re going to attempt to integrate the two in sort of a parallel narrative, where the music is just as integral and up-front as the acting, in an improvisational performance of Oscar Wilde’s The Picture of Dorian Gray. It’s something I’ve never done before, and I’m both enthralled and terrified,” chuckles Adams.

In preparation for Hoarse Rattle, Adams says that little to no rehearsing or planning takes place beforehand, leaving the piece to a spontaneous navigation of the ambiance of the performance and the nuances of it’s performers.

“It’ll be the most sonically exploratory concert this year, a heavy emphasis on sound manipulation,” explains Adams, referring to the miasma of avant-garde textures collected by him and his colleagues. “I’m going to be utilizing the body of my cello for some really out-there acoustic percussion things, as well as doing some digital processing of my sound with a couple of programs I’ve been working with.”

Existing predominantly in the realm of ideas, Hoarse Rattle will be a very loosely strung-together, off-the-cuff experience.

“We’ll jam together two or three times, if we’re lucky, but we won’t rehearse anything and we’ll have forgotten everything by the time we actually perform. That way, you get to feel out the other artists, and immerse yourself in their style and sound without becoming to reliant on parts or pieces. When you go out there and perform it’s all based on ideas. You find yourself tapping into this kind of symbiotic, implicit sense of collaboration, without weighing yourself down with ideas of what you ‘should’ be playing.”