By the time she was 21, my grandmother had had three kids. Then, she didn’t have another one for another 11 years. What changed? She gained access to the Pill.

For many people, hormonal birth control is something of a saviour. Whether it’s preventing unwanted pregnancies, assuaging acne and painful cramps or making erratic periods predictable, the list of pros is long. For some people, however, the list of cons can be even longer.

Readers who’ve had them, think about some of the worst period cramps you’ve experienced. Now, imagine having those cramps almost all day, almost every day, for months on end. For me, this was the majority of my second year. I couldn’t focus on school, and I definitely couldn’t have much sex.

Eventually, I brought my concerns to my doctor. He didn’t seem too worried, and simply prescribed me a different combination of hormones.

Four months later, the pain hadn’t subsided. As an added bonus, my skin became extremely sensitive to everything, especially the sun. I was having mood swings the likes of which I hope none of you ever witness. My monthly withdrawal bleeding was now accompanied by migraines.

So, mid-pack, I went off the Pill.

Every single one of my symptoms vanished. My sex drive skyrocketed, and I was suddenly an all-around more pleasant version of myself.

Over the next few years, I hopped on and off hormonal birth control a few more times, after finding a low-dose combination of hormones that mostly agreed with me.

And then I noticed a pattern.

Whenever I wasn’t on the Pill, I experienced a lull in attraction towards whoever I was seeing—even though my sex drive, in general, increased. Naturally, I turned to Google, and found this was quite common.

Yup—the Pill can actually affect who you’re attracted to. (This isn’t brand new information—Scientific American published an article about it in 2008!) Many women in heterosexual marriages who go off the Pill in order to have children report lower levels of sexual satisfaction; sometimes, it even leads to divorce.

Apparently, being on hormonal birth control steers women towards more “feminine” men—men who look like they would be more nurturing, more stable parents. This had held true for me—and it made me uncomfortable, especially seeing as I’ve never been too keen on the idea of parenthood.

The thought of a little white pill somehow dictating who I chose to be with was unacceptable to me, so a month or two after I met my current partner, I stopped taking the Pill—probably for  the last time. To both his and my great relief, my attraction to him only increased.

While my partner hasn’t noticed many other marked differences, I can’t imagine going back on the Pill. Before writing this column, I sat down and made two pros/cons lists—one for being on hormonal birth control, and for not. These especially stand out: 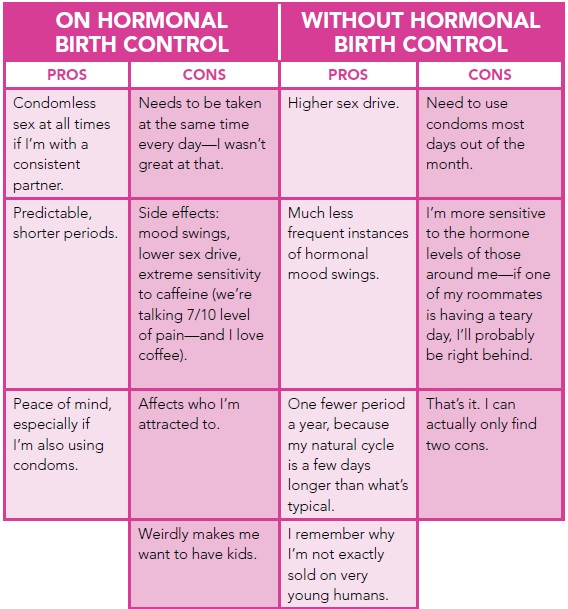 While hormonal birth control isn’t a good method for me, for many people it’s the best thing since the Backstreet Boys. Still, it’s important to keep in mind that it’s not fail-proof. For it to be as effective as possible, the Pill needs to be taken at approximately the same time every day. Certain medications, most commonly antibiotics, can also reduce the effectiveness of hormonal birth control. If you have any doubts, questions or concerns, it’s always best to speak with a health care professional.