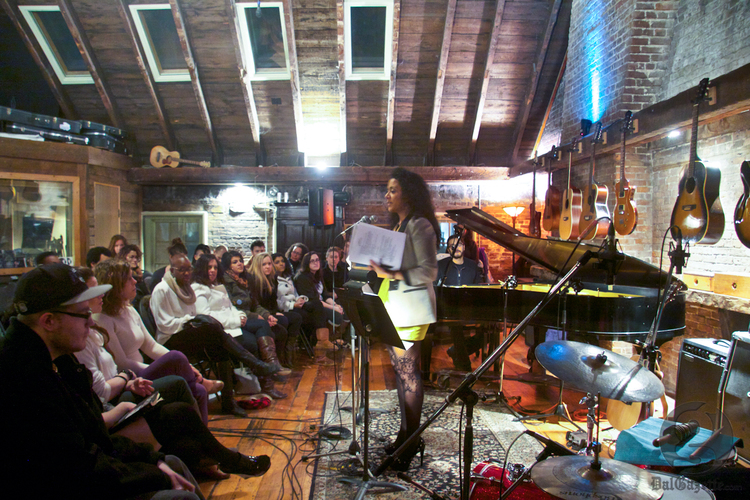 Spoken word fans were in for a treat this past Saturday when Ontario-based team-poetry pros Dwayne Morgan and Tomy Bewick performed to a packed house in downtown Halifax’s Sonic Temple.

The two back-to-back performances—which began with an open mic and closed with a charity poetry slam—were part of CommUNITY, a spoken word series organized by Poets 4 Change and Wordrhythm, in collaboration with JazzEast.

“It’s really just trying to use art for social change, but also better our community and better each other,” says Verena Rizg, the host of the event.

CommUNITY has been hosting monthly poetry slams since September 2011. Proceeds from the door go to the slam winner’s charity of choice.

This month’s event took place in the third-storey setting of Sonic Temple. Sound equipment, instruments and sound-dampening panels littered the vintage space, which serves as a recording studio by day.

But the dimly-lit, exposed brick-walled room made for an intimate setting that evening. A row of mounted, backlit guitars provided a backdrop for the event, including Morgan and Bewick’s much-anticipated headlining performances.

Morgan is a leading figure on the Canadian spoken word scene. He’s performed alongside Canadian artists including, K-OS and Nelly Furtado, and is the founder of Toronto’s poetry slam movement. Over his 20-year spoken word career, he’s organized hundreds of events, including When Brothers Speak, When Sisters Speak and the Toronto International Poetry Slam.

Bewick is a word artist based in Burlington, ON who has performed across Canada and the U.S. since 2005. He co-founded the Burlington Slam Project and is a four-time finalist at the Canadian Festival of Spoken Word. His work focuses on artist mentoring, youth outreach and community building.

In recognition of February being Black History Month, much of their set looked at themes of identity and race,

The pair also focused on fatherhood.

“Both Tomy and I are fathers,” says Morgan. “We both have daughters, so touching on women’s issues is very important as men trying to raise daughters.”

The duo’s collaborative—not to mention comedic—synergy was especially apparent during a poem about a pair of smack-talking sperm, both vying for vaginal victory.

The headlining duo’s set was preceded by an open mic, which included a ballad about big booties and a poesy to people’s passion.

“My mouth was extremely dry but it was incredible,” says Henderson.

“I wanted to re-engage,” he says about his decision to perform publicly for the first time. “This is kind of a journey into being able to feel again, being able to experience what happened in my life.”

To anyone considering taking the stage for the first time, Henderson recommends writing about what makes you want to jump out of bed in the morning.

“You have to dig deep within yourself to find out what really matters to you,” he says.

Morgan and Bewick both agree.

“You just got to get up there and do it,” says Morgan.

“Everybody has a voice; everybody has a story,” says Bewick. “Never undervalue your own light. … We all have something to offer.”

As for whether first-timer Henderson will follow up with a second performance:

The evening’s finale—a competitive poetry slam between local artists—ended in a tie between Dominique Oliver-Dares and Akilah Silverstein. The pair chose to donate the nearly $350 dollars raised between the Make-A-Wish Foundation and the Black Cultural Centre for Nova Scotia, respectively.