Dalhousie’s faculty of management retired its controversial advertising slogan “Straight to the Juicy” in October after realizing its sexual and drug-related connotations.

“We honestly weren’t aware of the double-entendre, but we were happy with how it worked out,” says Craig.

In the first week of the September, the management faculty launched an advertising campaign for its new Masters of Business Administration (MBA) program. “Straight to the Juicy” was the initial tagline for posters sent to universities across Canada. The faculty became aware of the problem when students at Mount Allison University in Sackville, N.B. were taking down Dal’s MBA posters and putting them up on dormitory room doors.

“People really wanted those posters for whatever reason,” says Craig. “When they’d read ‘Straight to the Juicy,’ people would raise their eyebrows and giggle.”

The faculty quickly switched to its other taglines “Where Self-Starters Start” and “Get What You Want, Faster,” but not before “Straight to the Juicy” made its way into a September issue of Maclean’s magazine – an issue that focused on “Canada’s best professional schools.” Maclean’s has about 2.5 million readers, according to Rogers Publishing. The original taglines are still advertised on the Dal MBA website as well as on the MBA Facebook page.

The taglines all refer to the new MBA corporate residency, an eight-month paid internship where MBA students can work with corporate employers such as Shell Canada, IBM and BMO Financial Group. Craig says all 24 corporations saw “Straight to the Juicy” before its publication and none of the employers had any problems with it.

“’Straight to the Juicy’ means get straight to what you want,” says Craig. “In MBA context, that’s the executive position.”

“For some reason it makes everyone smile,” he adds. 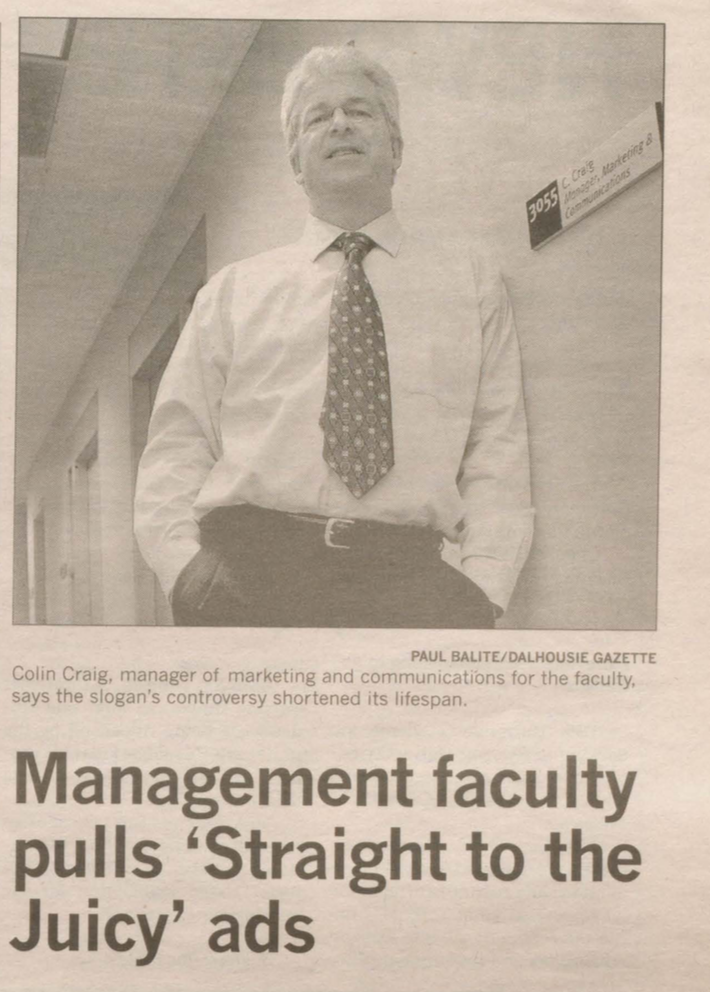 From the Dalhousie Gazette Archives.

Adam Marsh, president of the Dal MBA society, says at first the “Straight to the Juicy” slogan was confusing, but it can be interpreted in different ways.

“I personally did not find it offensive or inappropriate although I know that some students interpreted it this way,” says Marsh. “Some students expressed concern that the slogan was somewhat inappropriate and after much discussion this is why the faculty decided to change it.”

Craig says it was never the management faculty’s intention to continue using “Straight to the Juicy” through the entire advertising campaign, but the controversy did shorten its life span.

Colour, a social media and marketing agency based in Atlantic Canada, created the advertising slogans. The company declined to comment on its work for the management faculty, but its website reads, “Colour is a company guided by a philosophy that gets closer to the customer. At its core, getting closer to the customer is about immersing ourselves in the minds of consumers.”

Craig says David Wheeler, the dean of management and JoAnne Akerboom, the executive director of external affairs, made the final decision to go ahead with the “Straight to the Juicy” campaign.

Craig wouldn’t comment on how much Dal spent to promote the MBA program but he says it’s more than the school plans to spend on next year’s promotion because this was a launch campaign.

“You have to invest in a launch campaign,” says Craig. “You can’t just expect people to show up.”

The management faculty has published print advertisements in all of the university newspapers across Canada, as well as in the Graduate School Planning Guide, NOW Magazine and the Globe and Mail. There are also billboards posted in four subway routes from Downsview to Finch stations in Toronto. Dal’s management faculty caught on to the other ways “Straight to the Juicy” could be interpreted before posting the billboards and instead went with the “Get There Faster” ads.

“Some people say that any publicity is good publicity,” says Craig. “But I don’t think that’s necessarily true. I’d call this one a wash. It was not a deliberate tactic, but we were happy with the degree of buzz it did cause. If we’d known about the double-entendre, we would never have used it.”