A look into the life of a courageous trans individual 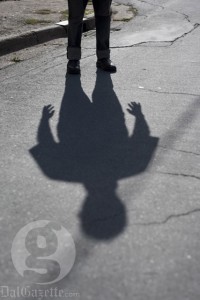 Editor’s Note: The names in this story have been changed in order to protect the employment and social well-being of the source, who is not actively out in Halifax

Sam sits his living room with a friend from elementary school, playing with his new cat. When the two met, Sam was female and went by a different name. Now Sam is a man, and the fit is so natural you wouldn’t give him a second look on the street.

He has taken a long journey through doctors’ offices, surgeries and his own sense of self to get where he is now.

“It’s been a long seventeen years. I kind of feel like an old man in a certain way,” he says. He is not out as transgender publicly and fears repercussions from his job if he does come out. It is not illegal for a company to fire an employee over being transgender.

Sam feels strongly that gender isn’t a question with only two answers. “It is factual that the gender binary exists, it’s called female and male, it’s also a fact that it’s just not true. There isn’t just one answer, biologically and socially. There is no such thing as a man who is 100 per cent manly or a woman who is 100 per cent feminine.”

In 1990 Sam was born a girl, with six older brothers. “There was six boys and then me. Mom really wanted a girl, and she kept having babies until she had me. There was a sign at the community store down from my house that actually said on it ‘Mary had a Girl!'” Sam didn’t feel that girl was the right word, despite what was on the sign at the corner store. “I knew that technically, biologically, I was female. People told me that, but it didn’t connect.”

Sam never felt feminine, even from a early age. “I cut all my hair off when I was five… and my mom bought me a bikini a couple of days later,” he says, laughing. “I was like, this is not working for me. I don’t know if you understand, but this is not working.”

As time went on Sam combed through books and crawled across websites on dial-up Internet to find something to connect to. “I was always kind of a word nerd, and I looked through literature and I looked online when that came out. I searched for a word for myself, and for a while I was kind of like a tomboy.”

Adopting and altering the name of someone he met, Sam began to redefine himself. “In Grade 3 I created a different identity that I didn’t know yet was male, but it definitely wasn’t female. I never really went through an ‘I could be a girl’ thing.”

After years of soul searching, Sam reached out to his father first. “At fifteen I came out to my father. I wrote down the definition from Wikipedia for transgendered and two-spirited on a crinkly piece of paper and just gave it to him… He said ‘so what?” Not to say that there wasn’t friction and misunderstanding. The medical system took some pushing to get testosterone treatments.

“I went to my family doctor who was really right wing Conservative. I tried to explain the situation to her and she was really not cool with it.” Sam’s doctor later agreed to sign the paperwork necessary, but left it to him to make the phone calls and find a referral himself.

“I found a doctor, at the QE2 and I didn’t know what to expect. I went to her and she gave me a prescription for testosterone. It was a very short, nervous visit and it was really weird and not what I expected. I felt really happy and awesome, and she didn’t care that much. That time, and even talking with my family doctor, I’ve always felt like there was a medical disinterest. Trying to become educated on trans people when they don’t already know is too much of a bother, so it’s always really quick and uncomfortable.”

“If you’re calling to make a doctors appointment because you have the flu, you can ask, ‘Mom, what do I say?’ You know what to expect because doctors see it all the time, but when you’re calling a Botox clinic about literally cutting your breasts off it’s scary.”

Sam is quick to say that everyone’s experience is different, and it’s an intensely personal experience.

“For me I went through a lot of shit but it’s worth it.”

As confused as he was at times, people around him were as well. Sam suggests allowing time for everyone to adjust. “People will come through. Learning patience is important, and learning patience about your own body is really important. People aren’t usually unhappy at you, they just really don’t know what to do with themselves. My parents always loved me, but I thought they hated me for a really long time. They called me ‘she,’ would hang up on my friends when they called asking for Sam, they were just scared and didn’t know what was happening to their little girl. Through time, people come around. If you just stick to it, people know you are who you are, and that you’re not going to change either way.”

Sam speaks about his Catholic parents, the growing they did and the contributions they now make to the LGBTQ community. “My parents were really straight, and that was just kind of their life. It ended up there were three gay men in their family, they had a really really hard time. They felt horrible. They thought they ruined lives and people were literally going to hell. They’ve stuck with the church, and facilitated family meetings of churchgoers who have contradicting values of homosexual or queer family members and the church. They get together and talk, and they’re huge in the Antigonish pride community now, which is really amazing.”

Sam says being comfortable with the pace is the hardest thing to learn in the process. “It took ten years, and people expect these things to happen fast. If you’re sure enough to say in ten years I’ll be okay with this, realize you’re going to have to wait a long time and jump through a lot of hoops.”