The Apple doesn’t fall far from the tree 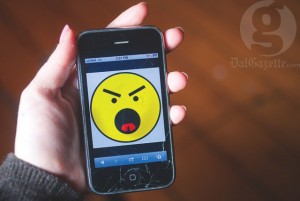 'Now how am I going to play Angry Birds?' | Photo by Angela Gzowski

In our supposedly brilliant and technologically advanced modern age, we’re expected to be constantly innovating; we are meant to be perpetually critiquing and evaluating new ways of being connected faster, “better” and easier. In a true Shakespearian twist, our valiant struggle towards uniting the world in an easily traversable web of information just seems to tragically blur the lines between reality and rampant infectious consumerism, slowly alienating ourselves from our own humanity.

Just last month in China, Apple halted the release of its latest technological marvel and immaculate innovation, the iPhone 4S, due to a shortage of the new model at all five authorized Chinese retailers. What ensued was a riot.

Shoppers had been camped out for days awaiting the launch—businessmen and scalpers had even hired homeless people and down-and-out migrant workers to stick it out and secure the product for them. Even before the announcement, violent fights and attempted stabbings had erupted in the line. When the word hit, the backlash was venomous. Volleys of eggs were pelted at the store in Beijing, livid consumers began to chase and berate the mall manager as he tried to intervene and, inevitably, the police were called in to disperse the angered consumers.

The Chinese people cite the reluctance of the Apple corporation to supply enough of its products as a direct cause of the widespread riots that accompany nearly every new product release. Despite an enormous amount of Apple products being fabricated in China and distributed worldwide, Apple ensures that only a minute percentage of said products actually make it into the country’s hands. An innocent attempt by Apple to further play up the “coolness factor” of the iPhone and related ephemera, inevitably encites mass panic, riots and aggravated violence.

The further we spin our tires and adamantly mire ourselves in the ongoing game of pointless overconsumption, the more we ignore the human cost. In the last 16 months, 14 workers have committed suicide at the aforementioned Longhua, China plant due to horrendous, prison-like work conditions and cramped, squalid living quarters. The management team responded by requiring workers to sign a contract assuring they won’t kill themselves. This is all so they can get you the newest incarnation of a smartphone that you’ll inevitably just chuck out when the next updgrade comes along.

Now, while it’s tempting to play off this overblown fetish for electronics as an overseas phenomenon or the ramifications of an overblown technophile culture and just shake our heads, this type of technological gorging and callousness is alive and well in our own backyards.

Every year there is a violent and startling increase in the number of people trampled to death in Black Friday riots. Massive, writhing crowds of people violently swarm through tiny store doors, disregarding anything in their way and using everything from pepper spray and blunt objects to firearms just to get through and save 20 per cent on a television. (The last two years have been littered with reported stabbings, shootings, assaults and deaths over grabbing that last Playstation 3).

Even closer, here at Dalhousie I recently overheard a girl lamenting to her two friends about how her “old, ugly non-smartphone” made her a pariah. She exclaimed how she “dies of embarassment” when she has to pull it out and how her top priority is finding a job so her first paycheck can go towards an iPhone 4S. What’s sad is that in less than a year, she’ll be bitching about how her WiFi isn’t fast enough to steal the newest Lana Del Ray album and that she hates living in the stone age. While that may be an unfair hyperbole, it certainly fits the bill of our penchant to consume all the latest products just because someone’s waving them under our noses.

When did we all become so damn cold? We’re cutting each other’s throats and vying for products we’re not even going to give a shit about in a couple of months. While it’s tempting to say that this violent, gluttonous binge of material goods is dictated to us by these “evil companies,” there’s nothing stopping you from saying “No” to a new iPhone, or to Apple if you find their practices to be unethical.

You have a brain. There’s no excuse for stomping someone to death for a slightly better WiFi connection and a 10 megapixel camera.