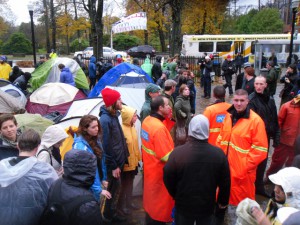 When I failed a test in Grade 5, my teacher told me I had to learn to deal with constructive criticism. “It’s hard to take,” she said, “but it will help you learn more in the long run.”

The Occupy movement is many things, but at its core, it is a critique. The right to freedom of speech is a responsibility to hold each other accountable. So I question why our mayor is so afraid of letting this constructive criticism unfold.

In an interview with CBC-TV following the Occupy eviction, Mayor Peter Kelly stressed that the Occupy crackdown during the Remembrance Day weekend was in response to the camps set up in Grand Parade. Kelly pointed out that camping in a public space is illegal under an HRM bylaw, further emphasizing that while the movement can no longer “occupy” the square, the right to protest still stands.

The exact threat posed by the movement’s occupation remains unclear to me. Violation of a bylaw would be the probable answer, but in my mind, there is something much bigger than violating a bylaw going on within the Occupy movement. Enforcing this legality on a random group of people living in a public space is much different than using it to oust an international movement. Justice must be sensitive to the context in which it operates.

Call me a leftie radical, but I smell something off in the HRM’s treatment of this movement. By taking away the protester’s rights to occupy, Kelly is automatically striking at the foundation of what the protest is about. In other words, it is called Occupy because they occupy public places. Get it? It seems impossible that Kelly and the city’s Council would be unaware of this.

Furthermore, I frankly find it disturbing that so many people are so quick to take the authority’s side. Have people simply stopped asking questions? A healthy democracy needs people to criticize the authorities within it. As Canadians, we are responsible for keeping our governments in check.

Put your tents back up, Occupy. Canada needs you.