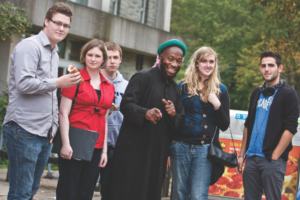 The Merriam-Webster dictionary defines democracy as: “a government in which the supreme power is vested in the people and exercised by them directly or indirectly through a system of representation usually involving periodically held free elections.”

Here in Halifax, we have a municipal government that doesn’t even recognize some of its largest constituents. Who was the last municipal politician you heard discuss how important Halifax’s students are to the city and its economy? I can’t think of one either.

The truth is that students in this city are not getting the respect they deserve. The students of Halifax have a tremendous amount of political and economic power. They are the sleeping giant. Here’s why:

There are six universities and one massive community college with three campuses in Halifax. These schools employ almost 7,000 people.  Every job on campus, every penny spent by the universities, none of that would exist without the roughly 30,000 students that choose to study in Halifax.

Students are a major cornerstone of our economy and are not being represented properly. There are probably more students per capita in Halifax than almost any other place in the world, which means that you are a power broker the city cannot afford to ignore.

But they’re trying to ignore you. Even if you want to vote in our municipal elections, there are two legal roadblocks that have been put in your way to keep you from exercising that power. First, students from outside of Halifax have been denied the right to vote because they are not considered a true resident of the HRM. Shouldn’t four years of paying municipal (it’s in your rent) and provincial taxes entitle you to a vote? This is a clear violation of your mobility rights, which are legally protected under the Charter of Rights and Freedoms. Second, you can’t register to vote until they call an election. That’s a violation of your equality rights, because only registered voters are called for jury duty.

Not anymore. If you’re a Canadian citizen and you’re a student in Halifax, you have the right to vote in Halifax’s next municipal election. I guarantee it, insha’Allah.

In Halifax, the politicians don’t fear the students because they don’t care about the students. They would rather ignore and forget the students altogether. Take a look at their economic plan for the next five years, entitled AGREATERHalifax: Economic Strategy 2011-2016. Even though the students of Halifax generate billions of dollars for this city, the current city government is more concerned with attracting foreign investors than building on what is already here.

That’s why I know, in October 2012, the sleeping giant is going to wake up and make this city better for students. Remember, these politicians have lost all their credibility with Haligonians. In December, councilors voted to hand over $56 million of taxpayer money to help build a convention centre for the business community. You couldn’t pick up a newspaper this summer without reading about the Mayor’s backroom deal with a concert promoter that left taxpayers on the hook for $359,550. It seems like Halifax always has enough money for the business community or concerts on the Commons. Those people downtown are drinking the Kool-Aid!

Here’s what I mean: would it really be crazy to imagine that instead of using $56 million to build a convention centre, we used it to build affordable housing for the students that keep this city running? What about setting up an HRM-funded bursary program for Halifax students to help them with tuition? And I know there are a million other things this city could be doing for its students but choose not to because no one has taken the time to ask. Well, I’m asking. What can we do to make this city better for you, the sleeping giant?

That’s why I’m running to be a councilor in the October 2012 municipal elections. I want to remind the people at City Hall that democracy is not just a word in the dictionary. Unlike them, I say what I mean and mean what I say.

Wake up! It’s time to take back your democracy and show these fat cats who really controls things. — The Dawgfather. Your candidate for HRM Council 2012