The city is still going through transition from disapproval to acceptance

Nova Scotia is a pretty open province and in its heart, lies Halifax. The city is full of various ethnicities, skin tones, disabilities and overall, a kaleidoscope of different human beings.

Within this kaleidoscope are individuals who don’t identify with the sex assigned at birth and for the most part, Halifax is rather accepting of them.

Transgender individuals are free to identify as they please and are allowed to both change their appearance and their legal status to the gender they identify as.

There are countless facilities available for those transitioning from hospitals who are willing to begin hormonal transition to centres for those under the LGBTQA+ umbrella such as the Youth Project, a centre for youth within the community under 25.

But, in a city with a population of 415,000 people, the city can’t be 100 per cent accepting. Much like the rest of the world, there will always be someone with an opposing opinion.

In 2018, before the day of the Second Annual Women’s March held in Halifax, there were controversies surrounding inclusivity, specifically for transgender, Black, Indigenous and Queer folks.

The controversy didn’t originate from the actual event but instead came from a Facebook post on the event page for the march. Jade Byard Peek, a Black and Mi’kmaq transgender woman, posted on the event page in January to share concerns about inclusivity.

Her post was met with more than 500 comments and resulted in many exchanges that included targeted and hate-filled words towards her person and gender.

Some comments mocked suicide rates in the transgender community, and some purposely mis-gendered transgender women, referring to them as men.

The organizers deleted the post once they were made aware of it. All other posts on the page had their comments disabled. Even though the offending comments were deleted, the response from the organizer is up online. 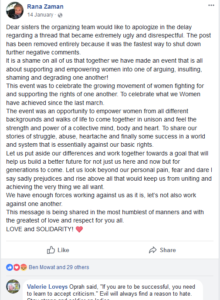 A screenshot of Rana Zaman’s response to the comments.

Despite the organizers deleting the post, those who came to Peek’s defence had their own critiques on the matter. They believed the organizers didn’t react quick enough, and in an interview with Metro Halifax, march organizer Rana Zaman stated they “reacted quickly,” but later said, “we made the wrong decision.”

This statement is in response to Peek’s disagreement with how the situation was handled, to which she’d stated, “by deleting all the comments now you’ve just erased educational moments.”

Peek originally expressed that she wouldn’t be in attendance but did in fact attend.

The march was split with one side specifically for marginalized women. Peek was in attendance of this side and received a personal apology from Zaman for the hurtful words on the Facebook page.

Even with the negativity present at the women’s march, living in

Halifax is still mostly positive for transgender individuals. A huge example of a positive experience is that of Leith and Les Johnson.

Leith, a first-year student in the Foundation Year Programme at King’s, along with her husband Les, who teaches Gender and Women’s Studies at Dalhousie, are both transgender and have moved to Halifax from the United States less than a year ago.

“It really is quite different here, even though we’re very geographically,” said Les, to which his wife responded “It’s really interesting, the culture difference because at first, you don’t really notice, but the longer we’re here, the more and more we notice it’s really different here. In a good way.”

When asked to give advice to any transgender travellers wanting to come to Halifax, Leith said: “I think in general being nice, people will get to know you here and I find that overall, people are very friendly and stuff, and I just think it’d just be very helpful.”

Halifax is still growing, with time there will be more people within the city. With its growth, as well as the growth of the world surrounding it, will come acceptance and overall a harmonious society.