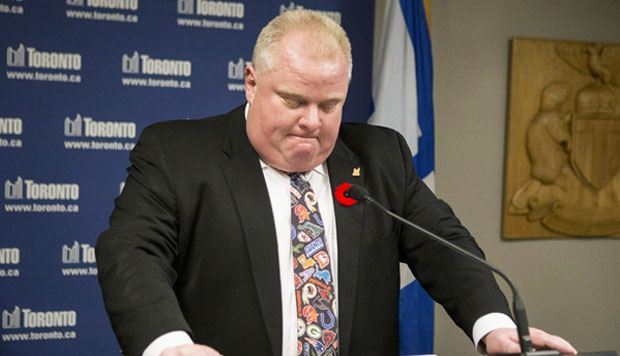 Mr. Ford, you need to hear this (Press photo)

I’m going to be honest: you messed up here, big time. I think one of the biggest things that you forgot is that you are not Lindsay Lohan, and you can’t go onto SNL after smoking up and make fun of yourself. You ran for the mayorship of one of the largest cities in North America— you didn’t star in the hilarious, but relatable, Parent Trap.

The real problem that I have with all of this is how you spent all of our time, reporters time, a Kickstarter campaign, having to listen to Gawker for once, interviews, articles; and in the end you just blurted it out on the radio? Poor form. This story did not have a satisfying ending.

Right now you are probably sitting in your office wondering if you need to resign for all of this. You’re not a crook, and you have no intention whatever of walking away from the job that the Canadian people elected you to do for Toronto.

Except that crack is illegal, and honestly saying that you were in the middle of a drunken stupor isn’t making this any better. You are right that you cannot change the past, except that you should have not done the thing that you did. Come on down with us commoners and smell the shitstorm that you started. You were put into a trusted position in 2010, but then you smoked crack “around a year ago” Tuesday. You were the Mayor when you were in a drunken stupor smoking crack, you were cracking down on drugs in the city at the same time that you were using them. Pun intended.

I would also like to add, as a reporter, I am quite sure “Did you smoke crack?” is the correct question to ask if you are trying to find out that someone smoked crack. Perhaps you misheard every single person who asked you that question, but I know for a fact that it was asked. Please do not blame the press for the fact that you were hiding the truth.

Beyond all of that though, beyond the lying and illegality, there is the simple question: Did smoking crack keep you from doing your job well? You did not set a good example for kids, you lied to people, you did a lot of wrong things, but you weren’t voted in as a role model. I don’t think that you need to step down for something that was done a year ago. Especially this close to the elections. Time to face the music. If the people of Toronto vote you back in, then we can’t say anything about it. Maybe you’ll just use the crack to enhance your cognitive ability. Don’t be in a drunken stupor when you try it though, mixing uppers and downers is a bad idea.

At least now we have an explanation for Toronto.