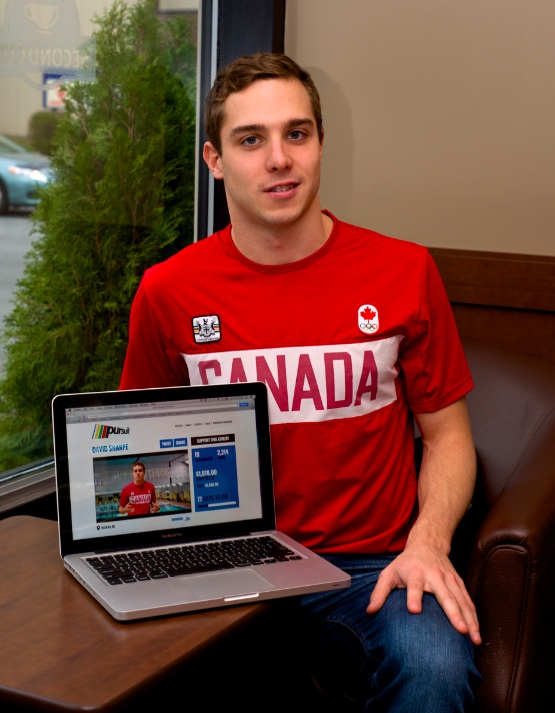 Dalhousie swimmer David Sharpe learned several important lessons during his successful quest for a berth in the 2012 Olympic Games. Foremost among them was the realization that a trip to the Olympics doesn’t come cheap. Set to make a return to the Games in 2016, Sharpe knew he needed to find a different method to help fund his training.

The fifth-year swimmer has started a Pursu-it campaign, which is a way for amateur Canadian athletes to connect to public funding. His campaign launched on Oct. 25 and will span a three-month period, during which Sharpe is required to raise $7,500. He says the money will help cover travel, living and coaching expenses—as well as new video equipment—as he trains over the next two and a half years.

“As an amateur athlete, there’s not much money floating around, so every bit helps to improve both your training environment and your quality of life,” says Sharpe.

Pursu-it is a volunteer-run, non-profit organization started by ex-Olympian paddler Andrew Russell, who believes amateur athletes need a better way to connect to the public for funding. Russell contacted Sharpe in late August and asked him if he would be interested in conducting a campaign. Sharpe agreed, and after researching what Pursu-it was all about, he knew it was a great opportunity.

“Going into London, I barely had enough money, so I didn’t need to look to alternative methods,” says Sharpe. “But going towards Rio, with it being two and a half years away, I definitely need to get money now while I still have the freedom.”

Sharpe says the money he receives will be split between himself and the pool to cover the extra cost for analysis during training.

“We have some money, but we need a bit more,” he says

Pursu-it creates incentives for public donations through a user-designed system of rewards and givebacks.  In other words, if someone donates a certain amount of money, Sharpe will provide them with something in return.

“For example, if someone gave me $100 then I’ll send them a signed national cap,” he says. “Or if they give me $300 then I’ll coach them for a swimming lesson.”

The largest donation he has receivedso far is $400, from a supplies company. Two weeks into his campaign, Sharpe is 15 per cent of the way to his final goal.

Another event integrated with Pursu-it is the FANfit Challenge, where members of the public can sign up to be mentored by one of the 11 world-class athletes currently running Pursu-it campaigns. The process will culminate in a one-day competition consisting of five different challenges—biking, agility, running, pulling and rowing.

This is the first year of the FANfit Challenge, which will take place during the final days of Sharpe’s Pursu-it campaign on Jan. 25 and 26.

Sharpe believes organizations such as Pursu-it and FANfit are great ways to get the fans involved when the Olympic Games aren’t happening and raise awareness of amateur athletes pursuing their goals.

“Online is the best way to reach the maximum number of people and a great way to reach your entire network immediately and consistently,” says Sharpe.